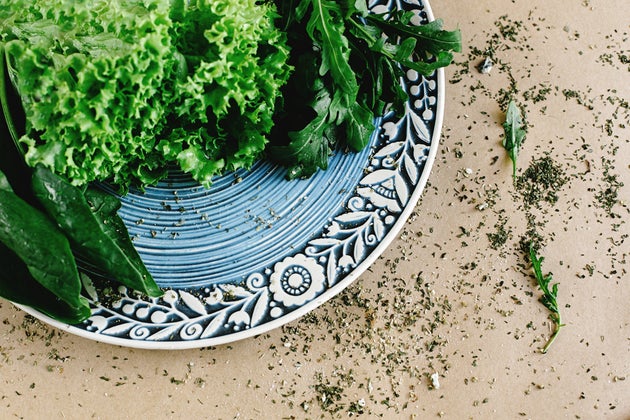 Have you ever heard of runners downing a shot of beetroot juice before a race? It’s not just a crazy superstition; there’s a reason that runners are slurping down that earthy purple juice. It’s chock full of nitrates. If that word “nitrates” conjures up unhealthy images in your head, it’s nitrates that are added to processed meat and have been linked to cancer. But, the nitrates in vegetables are actually beneficial to your health and may even boost your running performance.

Dietary nitrate, found in certain fruits and vegetables, has been found to improve blood flow, thus delivering more oxygen to the muscles and enhancing athletic performance. In other words, it’s a completely legal and natural ergogenic aid. Studies have found that the amount of nitrates in the blood peaks 1-2 hours after eating these nitrate-rich foods. So, if you want to try and make your next long run a little easier, try adding any of these foods to your pre-run routine.

Leafy greens are known to be high in nitrates and spinach is one of the best sources. With up to 300 milligrams of nitrates per 100 grams of spinach, this is a great pre-run food to boost athletic performance. Try blending it into a smoothie or make a salad with spinach as your green.

Although we often think of mint as a garnish, it’s actually full of nutrients, especially nitrates. Plus, mint has been shown to help with digestive issues, so it’s a great addition to a pre-run routine. Add it to the water that you drink throughout the day or steep it in tea an hour before a run.

Similar to spinach but slightly more bitter, arugula is a great source of nitrates. Some measures even suggest that it may be the best source of nitrates in any one food. Arugula obviously makes a great salad base, but it’s also delicious on top of a slice of pizza or grilled bread. Drizzle it with olive oil and you’ve got the perfect pre-run fuel.

Many think celery is devoid of nutrients because it’s made up of mostly water. But celery has a special surprise—it’s a good source of nitrates. Celery is a great pre-run veggie because it’s lower in fiber and won’t cause stomach issues during your run. Feel free to nosh on celery throughout the day or act like a kid again and make class ants of a log. The combination of celery, peanut butter and raisins is sure great extra fuel that you need to get you through your workout.

We obviously can’t ignore the veggie that started it all with the nitrate trend. Consumption of beetroot juice as it pertains to athletic performance has been studied extensively. And many of the studies have found that it definitely helps to boost athletic performance. The only problem is that it’s not very palatable. Some companies, like Beet-It, sell it in concentrated shots so that it’s a bit easier to take down. Beetroot juice is definitely worth trying before a run, but don’t give it a go before before a race as you don’t know how your stomach will tolerate it.

Quick, Easy, and Full of Veggies, This One-Pot White Wine Pasta is Everything You Need