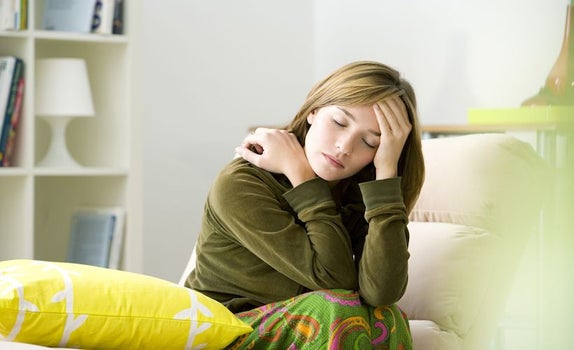 It was during the seventh mile of a half marathon when I felt it. The road swayed beneath me. My Nike shoes felt like they were sinking into marshmallows with each step. My head swam. I shook my head in an unsuccessful attempt to shake off the feeling–one I knew all too well and had hoped wouldn’t show up during the race.

A few months before the half marathon, I had started feeling dizzy. Sometimes it lingered for days and sometimes the room would spin around me violently. Then, one day, the lightheaded feeling didn’t go away.

I was training for this race at the time and a doctor I visited told me I was probably overtraining and should relax. Another doctor told me I was probably just too stressed. Still, the vertigo stuck around. At its worst, I couldn’t walk without guiding myself with my fingertips sliding against the wall in case I fell. I slept constantly to avoid the feeling–and, of course, I couldn’t run.

The Diagnosis: A Vestibular Migraine

Running has been more than just an outlet for me. It’s a way to calm my sometimes-anxious mind and turn those spinning thoughts into steady breaths. It’s been a way to challenge myself and remind myself that I’m stronger than I think. But suddenly, with daily dizziness, my body felt like it was failing me.

After several more doctor visits and tests, I was given a diagnosis I had never heard: I had a vestibular migraine. I’ve struggled with migraines since junior high school, but my neurologist explained that migraines can manifest as vertigo, and that was exactly what was happening in my case.

Related: Advice For Runners Who Suffer From Migraines

I tried two different rounds of physical therapy specially tailored to retrain my brain and eyes to work with my inner ear. Most of the exercises consisted of me shaking my head back and forth while focusing on a business card set against a checkered background.

I was trying to train my brain to accept a busy environment. I was told that stores and crowds often make vestibular migraines worse.

“Just don’t tell me I can’t ever run again,” I told the physical therapist as I let my head hang off the exam table for another exercise.

“We’ll get you back there,” she said, holding my head in her hands and turning me over. I could see my shoes when she moved me. I was dizzy, but I saw the shiny “Never Give Up” tag I had wrapped around my laces.

I promised myself I wouldn’t.

Refusing To Give Up

When I started feeling well enough, I would run, slowly and no more than three miles at a time. I told myself that, if I could run with dizziness, I could walk with dizziness. I could live with it.

My head was still foggy and lightheaded most days. At one point, I was using a cane to navigate grocery stores, but I still forced myself to try to run on good days. I would make one loop around my neighborhood and then another if I could. Instead of pushing my endurance levels, I was pushing my vestibular system to accept the pounding of my footfalls and the quick changes in scenery. I didn’t always feel great after a run; but, in a way, I felt a little stronger.

I finally saw a neurologist who specialized in vestibular migraines, and we worked out a management plan. We found a medication that stabilized the constant rocking in my head. I still had bad days, but I did things that I hadn’t done during the previous 20 months. I kayaked in the Gulf of Mexico. I skied in New Mexico. I climbed a mountain in San Diego. Best of all, I ran.

I finished that half marathon by the skin of my teeth. I weaved and bobbed my way toward the finish line. At the time, I had no idea I was running with a vestibular disorder.

These days, I’m still running with the disorder. I wish I could tell you I was cured, but I’m learning ways to cope and to keep logging my miles, and that’s okay.

In one of my first runs back, I ran in the pouring rain. The water streamed down the brim of my cap and slid down my arms as I pumped them through the air. My shoes splashed through the road, and the shiny little tag around my laces held on, a constant reminder to never give up.

How To Prevent Agonizing Post-Run Headaches

Run The Mile You’re In, No Matter What