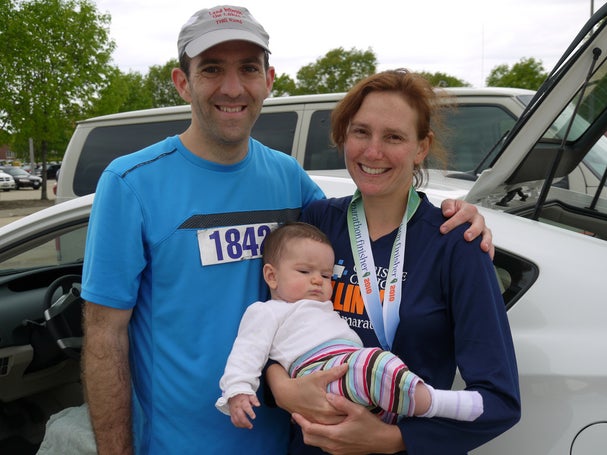 Four Months After Childbirth, I’m Still Upset With Myself

I stepped out of the car and said goodbye to my parents. My 4-month-old was gurgling in the backseat, and I leaned over to give her a kiss. She is my biggest joy in my life. She slapped my face with her slobbery hand, and I turned to wander through the darkness. I meandered through the crowd, taking my place at the start of the Illinois Half Marathon.

It was important for me to run this race. I was proving to myself that my body is still functional, capable and dependable.

I have been in a depression—a depression that I will never understand—since my dear Ana was born. The four months leading up to this half marathon were a roller coaster of emotions. Ana’s warmth, her coos and her chubby legs and arms are enough to set me reeling with pride and purpose. But I am upset with myself. My body has failed.

Since high school, running has been my outlet, a coping mechanism that has allowed me to overcome my share of obstacles. When I was stressed in college, I ran. When I was disgruntled with graduate school, I ran. When I had a disagreement with a friend, I ran. When I contemplated life’s purpose and my life goals, I ran. After my miscarriage, I ran. And now, berating myself for the sense of failure in delivering our first child, the only thing I can do is run.

The story of Ana’s birth is one of a delivery gone awry. The story would be a common one, if all women spoke about their experiences. But the women who share my story are those that tend to cower at the sidelines, unwilling to relive the experience and the feelings that torment us, while politely nodding and smiling as our friends retell their beautiful birthing stories. We have heard the same happy delivery story over and over, and every time we muster our most fake happy face and try our hardest to swallow the engorged knots in our throats.

My pregnancy was uneventful. While my belly grew, I continued with my normal routines. I selected a reassuring doctor at a small women’s clinic that had a good reputation. I carefully drew up my birthing plan. The nurses were not to offer an epidural or drugs; I wanted an all-natural experience.

I sat through birthing classes and—with enthusiasm that had been dormant since kindergarten—I prided myself with answering each question asked by the instructor. I mastered the breathing exercises, dutifully performed my Kegel exercises and doodled my way through the class about cesarean births.

And then I found myself 40 weeks pregnant, belly up in the doctor’s office with an ultrasound claiming that my amniotic fluid was low. The doctor scheduled me for an induction that night. After 24 hours, nothing happened—except that I was growing increasingly emotional and hungry. I insisted that they measure the amniotic fluid again. “Your fluid levels are well within normal limits,” concluded the new technician. And so an hour later, I had the surreal experience of leaving the hospital (after a 24-hour induction) still pregnant.

Related: 4 Ways To Strengthen And Heal For Postpartum Runners

Another two weeks passed. I went back to my routines, walking and jogging every free minute. My doctor prodded, measured and monitored my belly daily. Despite her constant recommendation of induction, I continued to stand my ground. I would not falter. No more intervention.

Then at 42 and a half weeks, my husband and I questioned our decision. We consulted with other doctors, who unanimously agreed that we needed to get the baby out.

My husband dropped me off once again at the hospital entrance, and I proceeded upstairs to the maternity ward. Soon I was hooked to an IV and walking the hallways as steadily as I could. My husband and parents stayed with me, and, interrupted occasionally by the nurses taking measurements and increasing the dose of oxytocin, we played cards. Hours passed. The doctor broke my water. At dinnertime my parents left, and the nurse strongly suggested an epidural so that I could rest through the night. “The next morning is sure to be exhausting. You need some rest,” the nurse said. I agreed. By morning I was 8 centimeters dilated, and the whole room celebrated that a baby would arrive soon. My husband, completely drained from the previous day and the sleepless night, asked if he could walk downstairs to buy a cup of coffee so that he would have energy for the events to follow. I agreed.

No sooner did he leave the room than the nurses appeared to check the record from the baby monitor. The baby’s heart rate was erratic, and the nurse carefully showed me the dips in heart rate that indicated an infection. “You have a healthy baby now, but this can change,” they said. Soon I was signing a pile of papers. My husband returned, coffee in hand. His face dropped when he saw me sobbing and shaking. “What’s going on?” he asked. “Cesarean,” I told him.

Forty-five minutes later, I was in the recovery room with my baby girl cradled in my arms. I was wheeled to my private room where my husband was waiting. We stared in disbelief at the new human being in front of us. But as the days passed, the feeling of disappointment mounted. Between feedings, my eyes would swell with tears and my heart would sink. How could I be so selfish? My prize was sleeping soundly in the bassinet next to me. I did it: I grew a healthy baby.

But I had a feeling of failure.

But I am a runner. I am strong, and I do not give up. I kept repeating this to myself, but as the days and weeks passed, unable to run after my surgery, I no longer felt strong. 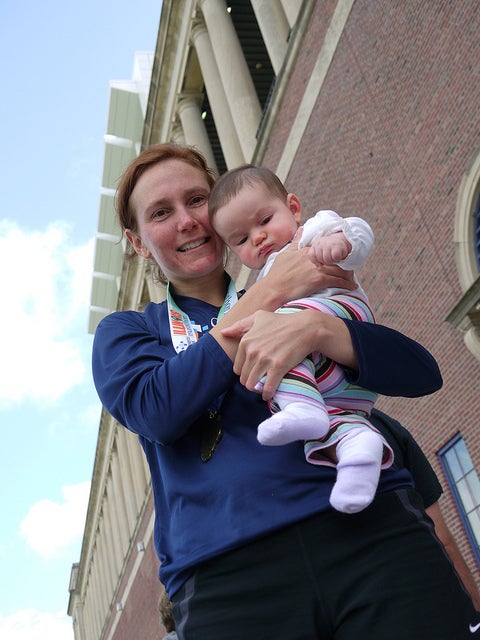 How Do I Tell My Story?

And as the weeks passed, my friends from prenatal yoga shared their experiences. One by one, each wrote about their textbook-perfect deliveries, and with each story I felt a little more depressed. I never shared my story. What story did I have? The story of failure?

After eight long weeks, my doctor gave me the all clear to start mild exercise. So I started walking two blocks and running one block, then walking one block and running two. Pretty soon I was running one mile, then two, and then I signed up for a half marathon. At first, I felt an empty pit in my stomach when I ran—the sense of failure that is so hard to get rid of.

Months passed. More friends delivered their babies. Happy as I was for them, I cried. And I ran.

There is a stigma in the United States about cesarean births. Everything should be natural. In 2015, the Huffington Post published an article stating, “Pregnant American women give birth via Caesarean section at more than double the rate the World Health Organization recommends.”

The article goes on to describe the risks, complications and reasons (which apparently include “planning a due date around work or travel plans, or even a doctor’s schedule”) for such a high rate of cesarean births. If this article were an outlier, then a woman could make a sane choice without an emotional toll when her baby’s heart rate is crashing during labor. But information like this is everywhere. Blogs, movie stars, newscasters, friends with babies and friends without are freely telling us, day after day, that a cesarean delivery is a failed delivery. I do not break easily, but the constant messages of failure became too much for me.

The Healing Powers Of Running

And so I trained. And then the day of the race came.

As I stood at the starting line, I saw my parents holding Ana. She was—and is—beautiful, chubby and alert. As the miles passed, my head cleared and I began to think about the past four months. I ran harder. At mile 8, as I realized that I was on track for a reputable finishing time, my mood changed. And I realized that I have a healthy, happy baby girl. I realized that my body is still the same dependable body that was carrying me 13.1 miles to the finish line. What more could a mother ask for?

Which Is Tougher: Childbirth Or Running A Marathon?

What Postpartum Runners Need To Know About The Pelvic Floor