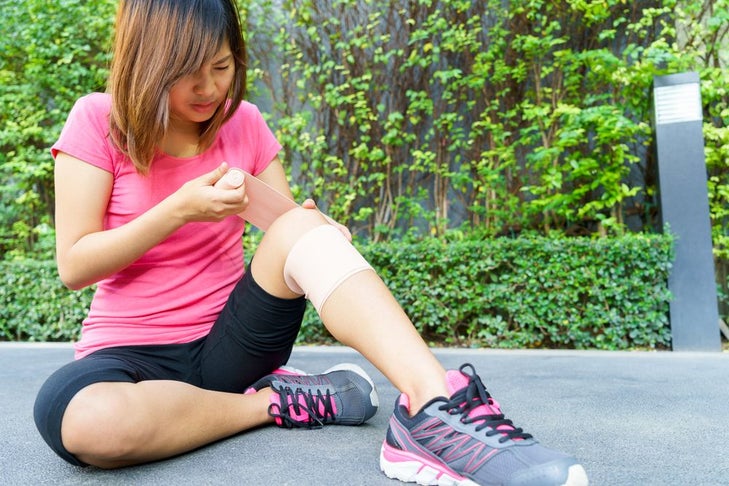 I felt it for the first time after a cold, snowy 10 miles in December: a slight twinge in my lower leg. It could have been mistaken for a knot buried deep in the muscle, but an unsettled, anxious feeling settled in the pit of my stomach. I knew it wasn’t a knot. And I knew exactly what that meant.

In April 2016, I toed the starting line of the Boston Marathon after practically limping to my corral. About a week before that, a small pain had begun in my hip, and despite massage, stretching, foam rolling and about a mile of KT tape, by Marathon Monday it had only worsened. But during a trip to get my hip examined, I was told the pain was most likely due to a muscle pull: painful to run on, but not impossible. I headed stubbornly to the race. Nothing was going to keep me from running Boston.

Nothing except, it turned out, a stress fracture in the femoral neck of my hip bone. I ran through worsening pain until mile 10, when my leg gave out and I collapsed on the side of the course. The following months were some of the hardest of my life. Filled with excruciating pain, I had to re-learn to walk under my own power and often cried myself to sleep because the mere act of lying down felt like I was being stabbed repeatedly in the hip.

Still, I fought hard to return to my own sense of normal. When I was cautiously cleared to return to running many months after the fracture, I threw myself into training, recovery timeline be damned. I pushed my way to a half marathon in November and set my sights on Boston—again—shortly thereafter.

It was a classic case of overtraining. You’d think I would have learned my lesson, but the mental battle of overcoming a running injury is perhaps as challenging as the physical. I returned to long runs too quickly, overjoyed by simply being able to power my body normally again. When the twinge of pain cropped up again in late December, I knew deep down in my gut that it was going to be bad news.

I took a few weeks off and concentrated on cross training, hoping against hope that the pain would disappear. But in late January, it was still there. Though doctors, friends and colleagues expressed incredulity at the possibility of a second fracture, I had the MRI performed anyway.

The results of the scan confirmed my fears: I had my second fracture in less than a year, likely a reaction to overtraining on a weak hip joint. Though the physical battle wasn’t as difficult the second time around, the mental battle was far more challenging. Forbidden to run yet again, told to drop out of Boston for a second time…there were many days where I curled up in my bed and thought leaving its warm comfort was impossible. I took all of my running paraphernalia off my walls, hiding it deep in my closet and under my bed. I burst into tears at work, in the car, alone, in front of my friends. I felt as if something had been stolen from me on a deep level. I felt like a failure.

Related: What To Do When You Can’t Run

Why It’s So Damn Hard

The emotional battle that comes with running injuries is one that isn’t explored enough. Frequently, the physical signs of a running injury don’t show, hidden amongst layers of skin, muscle and bone. It makes sense then that the struggle to heal emotionally is equally obscured.

Training for long distance races is a uniquely time-consuming effort. For months, I pored over pacing suggestions, speed workouts and routes that I mapped around my neighborhood. I analyzed which hills would give me the best profile for my mileage goals that day, experimented with different fueling sources and wrote nutrition plans each week that dovetailed nicely with my mileage totals. It was complete running nerd immersion, and I was in heaven. All I talked about was running, all I thought about was running, and I looked forward to my long run each Saturday morning with an eagerness I’d previously reserved for BOGO glasses of wine.

That’s the beauty of the sport: it quickly becomes a major part of your identity. Once you begin running, you’re surrounded by materials designed to aid your transition into that “runner” identity. Magazines, blogs, meet-up groups, nutrition cookbooks, online forums…you’re rapidly transported into an entirely new world. But upon injury, that world changes drastically. With the rug pulled out from under me, my favorite ways of spending free time suddenly became masochistic. Why read my favorite magazines when I couldn’t test the workouts?

It was hard for me to remain motivated to do anything. I was cleared to exercise my upper body, but dragging my walking boot to the gym to lift weights felt like an exercise in futility and embarrassment. Each time I ate, I silently wondered if I “deserved” the food, given my inability to run. At times, I felt like a caged animal. But instead of fighting to return to myself this time around, I gave up, silently sinking lower and lower.

Links Between Depression And Injuries

Worsening the problem was my struggle to reconcile my runner’s appetite with my injured body. My relationship with food has frequently been fraught. In high school, I struggled to find a normal, healthy balance, often restricting my meals and obsessively counting calories. But when I began to take an interest in fitness—particularly in running—I learned to look at food as fuel and marveled at the difference a rounded, healthy diet could make in my athletic performance. With my physical ability suddenly stripped away, the small voices from my past began to return. Did I really deserve that meal if I couldn’t hit the track in the morning? Should I honestly be eating anything except vegetables after my orthopedist strictly instructed me to shut down all activity for three weeks?

In 2014, U.S. News and World Report published a piece on the link between depression and sports injuries. “Depressive symptoms may also stem from the loss of a physical outlet and a change in exercise schedule,” Hannah Webster wrote, which resonates deeply with my personal experience. There are a few suggestions to combat these emotional struggles, she continues, including seeking guidance from peers. But perhaps none is more important than seeking professional help.

“Like with any kind of emotional distress,” Webster wrote, “it’s essential to see a professional who can address your psychological needs with a coping plan.”

After realizing that it had become painful to see my running sneakers—to the point where I wanted to throw them out—I did just that, finding a therapist who could help me work out the complicated mess of emotion that had come along for the ride with my dual injuries. I learned very quickly to assign equal importance to recovering physically and emotionally, and I began to read pieces much like this one, where injured runners pulled back the curtain on the difficulties of their condition—difficulties that were invisible to the naked eye.

It was—and is—a long, painful process. I slowly opened up about how useless being injured made me feel and, in turn, learned to focus on the areas of strength that remained. Where weight lifting was once my least favorite aspect of my fitness routine, being forced to solely exercise my upper body taught me to appreciate the changes in strength I could see from week to week. Instead of focusing on the races and workouts I couldn’t complete, I switched to researching the healthiest ways to return to running after a fracture. It was the same sort of intensive research I’d enjoyed before, but with a different focus.

Trickiest of all was learning to not place my self-worth, and my relationship with food, in direct correlation with my ability to run. That will perhaps be an ongoing battle, but small efforts, like reminding myself of accomplishments that happened off a race course or not looking up the calorie count in a meal, made every day a little easier. Continuing to seek professional sources to assist with this switch in mentality proved to be the best decision I could have made for my mental health, and I grew to think of our sessions as physical therapy for the mind.

Ultimately, I think furthering the conversation around emotional recovery is one of the most important steps we can take. After all, every injured runner wants the same final result: to return to the run happy and healthy, in all measures of the word.

5 Things My “Injured” Status Has Taught Me

5 Mental Side Effects Of Injury Recovery