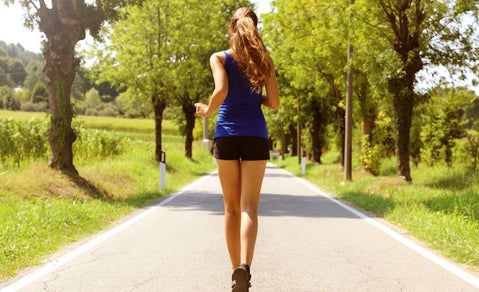 All runners are real runners, read a headline in the July issue of Women’s Running. It’s something I would tell my middle school track and field athletes as their coach, but it’s something I have trouble telling myself. As a kid, I played some recreational sports badly. In high school, I played on the tennis team—I wasn’t terrible, but I wasn’t great, either. “Athlete” was never one of my labels or identities. But running always intrigued me. Growing up, I lived right near a beautiful state park, where I would occasionally go out for a run.

I started to work out in college, and that sometimes included running. In my mind, running a mile or two as a workout did not make me a “runner.” I began to think about training for a 5K. Every few months I would start a plan, find it difficult and give up. Finally, in 2012, a friend of mine signed us both up for a 5K to raise money for diabetes—and there was no turning back. I stuck to my training and after a few weeks, I broke through the wall. My body got used to the rhythm of running. I found myself able to run longer and farther with more ease. When it came to race day in May, I ran the entire time.

After finishing the 5K, racing became an itch I could not completely scratch. I felt I could go faster and signed up for another 5K that July. Lo and behold, I was able to shave three minutes off my time, coming in right under 30 minutes. I then tried a Thanksgiving 8K and, after conquering that distance, I signed up for the Superhero Half Marathon taking place a few weeks after my wedding the following spring (probably not the best timing, in hindsight). My training consisted of slowly adding mileage to my long weekend runs.

On the day of the Superhero Half Marathon, I was decked out in a Wonder Woman outfit. Once I started running, everything felt fine—until suddenly, it didn’t. I knew nothing about fueling, strategy or pacing, and at mile 9, I felt like I needed fuel as my legs and stomach began painfully cramping. I ran/walked the rest of the 4 miles feeling dejected. Instead of being proud of myself for finishing a half marathon, I felt like a failure. I loved running but still could not see myself as a legitimate runner.

Regardless, running was now a part of me, so I kept racing and signed up for a half marathon training program for the New Jersey Half Marathon the next year. Being part of a training group was a very supportive experience: We really cheered each other on and talked each other through the difficult moments. During the race, I felt strong the entire time and was overwhelmed as I crossed the finish line. My finish time was 10 minutes faster than that of my previous half marathon, and I never had to stop.

Although I have become very goal oriented and, in reality, compete against myself, it’s still hard to avoid comparing myself to other runners. I suffer from severe imposter syndrome. In very small races, I may place in the top three in my age group, but in most races, I’m a solid middle-of-the-pack runner. Talking to a friend who ran cross country in high school, I mentioned that some of my early morning runs that I do with my neighbor are at about an 11-minute pace. She replied that it wouldn’t be worth it for her to join me because runs at that pace don’t count as “real runs.” After about six years of running, it also frustrates me to listen to someone new to the sport talk about doing a marathon (which I have not yet conquered) or getting a sub-two-hour half marathon finish time on the first try (I still haven’t done that after six or seven attempts). I’ve even had a man ask me if people question my ability to coach track because I’m not tall and skinny like a runner.

The irony is, if any other woman was relaying these same thoughts or conversations to me, I would not hesitate to say she is a real runner. It is easier to cheer on someone else than it is to cheer on yourself. Yet I keep plugging along. My mileage varies week to week and month to month, but I consistently get out there and run. I have good races and bad races, but I keep racing regardless. If I go for more than a few days without a run, my body and mind crave the feel of the pavement under my feet. Whether I feel like an imposter or not, I run; therefore, I am a runner.