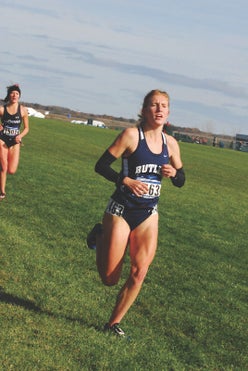 When I was a kid, I found every opportunity I could to run races. Whether it was against my mom, my brothers or the neighbor’s cat, I relished in the thrill of competition. But somewhere along the line, things changed. After an extended hiatus and two collegiate injuries, I found myself utterly terrified to race.

I would try to get excited, but as soon as the gun went off, I would panic. “Crap,” I’d think. “I don’t want to do this anymore!” The pressure to succeed was too much to bear, and I would crumble before I even found my stride.

Fear, it turns out, isn’t a healthy motivator in the longterm. I quickly realized that. As frustrated as I was, though, I couldn’t seem to change it. In fact, it wasn’t until this past September that my mindset finally shifted. At that point, I had completed some solid workouts and was in decent physical shape. Yet I was on the verge of tears before my first cross-country race of the season—so much so that my coach pulled me aside. “What would it be like if you raced like you couldn’t fail?” he asked. “What would be different?”

The question both inspired and annoyed me. I was inspired at the possibility of enjoying competition again. I was annoyed because it seemed impossible. But it did get me thinking: What is failure, anyway? Was it failure when I derailed my running career for two years? How about when I ran three terrible races in a row? Or when I gave up halfway through a race?

Ultimately, I decided none of that was failure. The only true failure, in my view, is letting fear win, and I was ready to stop doing that.

So I did. I separated my worth from the outcome of races and said sayonara to my precious goals of perfection. Instead, I began focusing on training hard and savoring each race—reflecting, refining and genuinely having fun.

And guess what? It’s working. I’m racing with more speed and audacity than I ever have. And as I do, the results take care of themselves. The anxiety flees.

So how would you race if you knew you couldn’t fail? Most likely, your experience would change. If that’s the case, I encourage you to lay down your definition of “failure.” Failure is not a moment of weakness or a fractured dream. Those are simply bumps in the road that, although painful, don’t define you. You’re still here, so as far as I see it: You haven’t failed.

I have a row of neon-green sticky notes plastered to my bedroom wall—five in total. Each one holds a different message, scrawled in pink pen with dogged determination the night after that first September race. “I am a fierce competitor,” one says. To its left: “The joy of the Lord is my strength.”

The middle sticky note, the one I see most often and inked with the most vigor, is written large, in all caps. “I am victorious over fear,” it says. And I believe it.

Can Gratitude Actually Make You A Better Runner?

Attitude Can Be A Game-Changer When Running