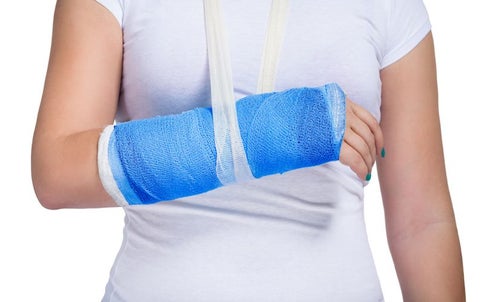 Race Lesson Learned: During your first race after recovering from a broken arm, give yourself (a bit of) a break.

This was my first race in more than a year, and I was nervous.

The reason for an entire year without races? I had embarked on a backpacking adventure to Australia, South East Asia and New Zealand with three of my girlfriends. From August 2012 through April 2013 we lived as nomads, traveling where the wind blew us. I continued to run almost every day, but instead of using my runs to train for races, I used them to become acquainted with new cities, countries and cultures. I had originally intended to travel abroad for a full year, but my trip was cut short due to an unfortunate tumble of fate. One night in Sydney, as I clambered up the ladder of my hostel bunk bed, I slipped on my running shorts (of all things!). I had forgotten that I’d left them there to air-dry after a run. I came crashing down to the concrete floor below, landing directly on my left elbow. I completely shattered my humerus, forcing me to terminate my travels and fly home for surgery.

After the anesthesia from surgery wore off, I was told that my first question (which I do not remember) was: “When can I run again?” The doctor told me it would be at least several months. A month later, on my birthday, I had a checkup. The doctor commended my steady progress and recovery, prompting me to ask the only thing on my mind: “Can I please run?” Hesitantly, he gave me the green light with one caveat: I had to run while wearing a sling.

After several months of awkward running and biweekly intensive physical therapy sessions, I eventually obtained full functionality of my arm. I was able to run semi-normally again, and knew I wanted to compete in a race. Since I had just moved back to Phoenix, I decided my “comeback” would be the Arizona Rock ‘n’ Roll.

Matt (now my husband) and I had also just started dating. He offered to not only come to cheer me on, but also to run with me. I took him up on his proposal, but insisted that he run at his own pace. I had already discovered that there was no use in trying to keep up with Matt. During one of our first casual runs together, Matt graciously instructed me to set the pace. Only several weeks into our relationship, I wanted to impress him, so I went all out! About a half-mile into the run, he turned to me and smiled, “Are you sure this is a good pace for you?” Panting and gasping for air, I feigned confidence with my reply, “Yeah, why?” With utter disbelief he replied, “Ehhh…because we’re going at a five-minute pace.” We ran less than a mile together, and I had learned my lesson.

As my comeback race day drew closer, my anxiety mounted. Not only did I want to prove my legitimacy as a runner to Matt, but I was also worried about my arm. Perhaps I had rushed my recovery? What if I tripped and fell mid-race, resulting in re-injury? Luckily, some of my friends, co-workers and Matt were there on race morning to ease my fears.

Unsure about what pace I could realistically maintain, I started out slowly, deciding it was best to save my energy for the end. Perhaps I was a bit too conservative. With only 1 mile left, Matt, who had already completed the race, came back to help me finish. Again, trying to impress him, I full-out sprinted to the end. Ironically, instead of impressing him, he questioned my race tactic: “If you still had that much energy, then it means you didn’t race well enough!” Tough love.

This was not my best race, and certainly not my worst, but it was my first race post-injury. This race gave me the confidence and reassurance that I was strong enough to run and race again. Phoenix is a very special city for Matt and me for a variety of reasons. It’s where we met and fell in love. It’s where we had our first date, first concert, first hike, and after this race, our first half marathon. Phoenix is officially where our couple racing journey began.

If Something Feels “Off,” It’s Worthwhile To Visit A Doctor

5 General Rules For Returning To Running After Injury

A Beautiful Weekend In Sedona