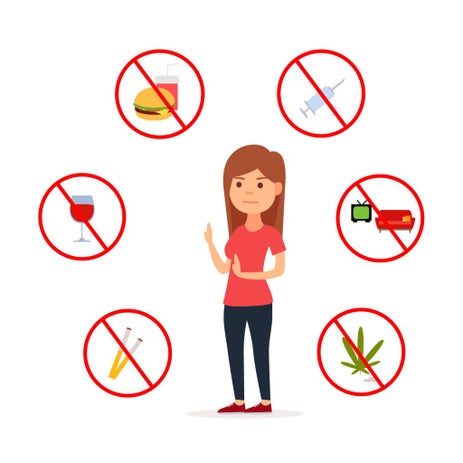 To master the art of doing, you need to create habits and routines in the brain that are relatively resistant to a whining Chimp and the paralysis-by-analysis ruminations of your Professor brain. For the routine to become automatic, we need to design it with such conscious and deliberate precision that it’s ready-made to run on autopilot.

Here are the step-by-step instructions.

Step 1: Learn The Pattern And Crack The Code

All habits follow very predictable and logical patterns. They are composed of a “neurological loop,” which is science-speak for a predictable pattern of events in the brain and body that runs on autopilot. The loop consists of three important elements: a trigger, a ritual, and a reward. If you want to break, modify or build habits, you must first figure out which element is causing the most problem (it might be all three!).

The event that cues the brain to start the habit, like your alarm clock going off if you need to get out of bed early. It’s the habit’s starting pistol. If you want to start a new behavior, you often have to choose the trigger for that behavior.

The actual behavior that you want to start, which includes the timing and the step-by-step instructions for how it occurs. For example, if the desired behavior is to do more stretching and rolling, the ritual might start with being in the right clothes, having any equipment you need on hand, having enough space and time and knowing what exercises to do.

The feeling you get once you’ve done or are doing the behavior. For new behaviors that aren’t intrinsically pleasurable, you might need to pair a separate reward (something that does provide a dopamine squirt) with the new behavior so you still feel good after completion. For bad habits, the reward is what stops the craving. It might be the intense pleasure you get from eating chocolate, or temporarily forgetting that you’re lonely when you hit the booze.

A former research collaborator of mine at Stanford University, tiny habit guru Dr. B. J. Fogg, trained himself to do 10 push-ups every time he flushed the lavatory. He developed great upper body strength using this simple trick. That’s a genius use of triggers. When you think of the behaviors you want to change, try to be as specific as possible. For example, instead of just saying, “Do more training,” you might say, “Get up at 5 a.m. on Monday, Wednesday and Friday to run for 45 minutes before work.” Buy your copy of The Brave Athlete and build some good habits using Exercise 1 from Chapter 4: Setting Goals Is Not Your Problem.

The ritual is the sequence of behavioral steps you need in order to actually cre­ate a habit. You need to know exactly how it unfolds for you, and this takes some self-experimentation. If you’re trying to start a new habit, you should design the ritual so it has a good chance of becoming automatic. If it’s overly complicated or requires a lot of thought, it doesn’t stand much of a chance. For example, if you want to go out for a run three mornings a week before work, you might plan the routine as follows:

If you have to dig through laundry for clean shorts, or try to answer e-mails beforehand, it doesn’t lend itself to becoming automatic. Lock that ritual in! If you’re trying to break a bad habit, you need to deconstruct the pattern of actions that lead you there. For example, your evening snack binge ritual might involve getting off the couch, walking over to the pantry and opening it, foraging for something, and then slouching back on the couch with your treats. You may want to ask your partner or spouse to help you uncover your ritual. After all, many routines are subconscious and you may not even be aware you’re doing them. Remember, you’re trying to make the ritual conscious (Exercise 2, which you can find in Chapter 4 of The Brave Athlete).

Step 3: Know The Rewards That Do And Don’t Work For You

For some people, the reward is the driving force behind the habit. We’ve already established that powerful neurotransmitters cause a chemical reaction to reward the ritual and increase pleasure (dopamine) and/or feelings of happiness and positive mood (serotonin). However, other neurotransmitters may also be involved, like endorphins (which reduce stress and alleviate pain) or oxytocin (which increases a sense of trust and intimacy). If the action you’re trying to just do isn’t that pleasurable or enjoyable, we need to find a way to make it so.

Here’s an example from Lesley, the world’s biggest moaner about how cold the swimming pool is.

Lesley: But babe, you don’t understand! The pool is so f*cking cold! I’m literally shivering in the water. I just don’t want to get up for that. Have you any idea what it’s like trying to psych yourself up for a hard session in a cold pool when it’s still f*cking dark out? It’s miserable!!

Simon: [Resisting the urge to say: Just suck it up or fatten up a bit.] That sounds horrible, darling. Why don’t you do two sessions a week in your wetsuit? It’s warm, it’s fast, and you won’t dread it so much.

Sometimes, there’s really no way to make the activity itself more enjoyable. An athlete we coach through Braveheart Coaching, Nadja Mueller, has an on-again-off-again relationship with a masters swim group. She devised a strategy to help her look forward to swimming–after each session she goes out for breakfast with some of her friends, many of whom need a similar reward.

Here are some other occasions when you might need to pair something that is pleasurable or enjoyable with the suck.

The bottom line is that you need to create a meaningful reward for your new routine—something that gives you pleasure or happiness. It doesn’t even have to happen at the same time. Stop for a cappuccino on your way to work or play your favorite cell phone game for 10 minutes before you start your day. Set aside $1 for every mile you run to a fund that you can give to charity or use to buy a new outfit or gadget at the end of the month. Avoid rewards that sabotage your new habit—like ordering a 1,000-calorie drink after burning 250 calories during your run. Good habits need good rewards.

If it’s a bad habit you’re trying to change…

The goal is to uncover what need or craving the reward was satisfying. Does it change a feeling, like boredom, anx­iety, or loneliness? Does it change an internal physical state, like hunger or pain? If you’re still not sure what reward is lurking behind a bad habit, try this experi­ment: switch out the reward for a “fake” reward while keeping the exact same ritual. See what happens to the feeling or internal state. For example, you might go to the food cupboard at the same time you always do, but instead of taking the chocolate, you drink a bottle of fizzy water instead. If after 10–15 times of drinking the fizzy water the cravings have subsided or gone, you know it wasn’t hunger. If you’re still not sure what it is, try writing down the exact feelings you’re experiencing 10–15 minutes after having the reward and then try other fake rewards (like chewing gum, drinking hot tea, or going on Facebook, etc.) and repeat the experiment.

Once you’ve figured out the ritual and reward, the next step is to create a trigger for it. Remember, a trigger is the habit’s starting pistol. It’s the cue that triggers the routine. Triggers can be physical objects (your cell phone), circumstances (a time of day) or feelings (boredom, anxiety, hunger, etc.). Triggers are important because they remind you of what and when you need to act. All behaviors that you want to just do must have good triggers that get the ball rolling. For example, the act of brushing your teeth at night is usually triggered by feeling sleepy and deciding it’s time for bed.

If you’re trying to start a new habit…

You need to design your new triggers carefully. Some people lay out their run kit the night before as a visual reminder as soon as they get out of bed. For people who are just starting a new exercise habit, it can even help to sleep (!!) in your running clothes the night before to make it harder to bail. However, it might just take a Post-it on the refrigerator or a ready-packed gym bag next to the door. Others might need the help of others.

For example, a friend who texts you at 7 a.m.: “Track session @6.30 p.m. tonight. Don’t U dare bail! U betta B there!” is providing a great trigger for you to quickly throw your run kit in the car before you leave for work.

A well-designed trigger needs to be specific and actionable at that exact time. You also need to have the skills or ability to act on it. If it’s vague or you can’t act on it immediately, or you simply don’t have the skill, fitness or knowledge to do what you actually need to do, the trigger (and possibly the ritual) needs redesigning or replacing. One strategy that helps is what behavioral scientists call habit stacking. Habit stacking is simply the process of adding a new habit on top of an existing one. Always flossing after you’ve cleaned your teeth is a habit stack. The existing habit (brushing teeth) becomes the trigger for a second habit (flossing). Habit stacks are great because you are leveraging triggers that are already cemented into your ritual.

Here are some examples of a few novel athletic habit stacks:

If you’re trying to undo or replace a bad habit…

You need to become aware of the triggers for your existing habits. They can be very subtle and often appear amid a gazillion other cues that bubble up into your consciousness. For example, what triggered you to bail on your ride this morning? Was it the thought of the effort? The cold weather? How much work you have to do? Something else? If you’re trying to change an existing habit, you need to eliminate or sidestep the triggering circumstances, and to do that you need to have a forensic understand­ing of what, how and when those triggers occur. The good news is that psy­chologists have determined that you can deconstruct your trigger problems by completing Exercise 3 in Chapter 4, available in The Brave Athlete.

Once you’ve uncovered your ritual, experimented with rewards and isolated your trigger, you need to put the pieces together and write out the new habit “loop” on paper, as in Exercise 4 (please complete it in your copy of The Brave Athlete). Think of this like a diagram describing each element and how you intend to create it (start a new habit) or disrupt it (break a bad habit). Then you can start with some self-experimenting to fine-tune it and practice it!

Social Media Should Be Fun, Not Depressing

Feeling Fat Around Other Athletes And How To Squash Those Thoughts