This excerpt is adapted from The Brave Athlete by Dr. Simon Marshall and Lesley Paterson. Their cutting-edge brain training guide solves the 13 most common mental conundrums athletes face in their everyday training and in races. With The Brave Athlete, you can solve these problems to become mentally strong and make your brain your most powerful asset.

You don’t have one brain—you have three; your ancient Chimp brain that keeps you alive, your modern Professor brain that navigates the civilized world, and your Computer brain that runs your habits (good and bad). They fight for control all the time and that’s when bad things happen; you get crazy nervous before a race, you choke under pressure, you quit when the going gets tough, you make dumb mistakes, you worry about how you look. 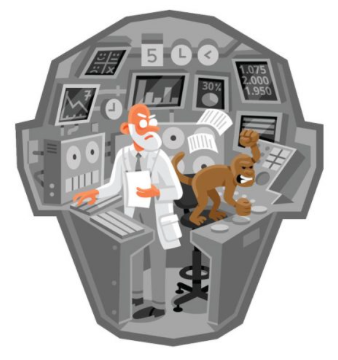 What’s going on inside your brain?

Inside the head of every athlete are two very distinct parts of the brain vying for control of your thoughts and feelings.

First, there is the limbic system, which reacts only to drives and instincts that you experience as feelings and impressions.

Then, there is the frontal cortex, which deals with facts and logic and guides empathy, moral judgment, and social conscience.

We’ve found it helpful to think of these two regions as a Chimp and a Professor.

The chimp metaphor comes from Dr. Steve Peters, a British forensic and sport psychiatrist who wrote The Chimp Paradox. The chimp is a great metaphor for the limbic system because a chimp often acts up, has tantrums, and can be pretty disruptive. But a chimp can also be calm, sleepy, adorable, and cuddly. Most importantly, a chimp doesn’t really mean any harm to you because it doesn’t know any better. It’s just a chimp. In contrast to your Chimp, we refer to your frontal cortex as your Professor brain, because it’s always logical and only deals in facts and truth.

Chimp versus Professor: Where the sh*t hits the fan

In an ideal world, your Chimp brain and your Professor brain would be nice neighbors. Like when your neighbor leans over the fence and asks to borrow something. Polite and considerate. Here’s the ideal scenario:

Scientific studies in neuroscience and cognitive psychology have proven that your Chimp brain is a tough wee bastard. Your Chimp was bestowed with biochemical powers (called neurotransmitters) that enable it to bully your Professor brain into submission. Instead of being a polite and respectful neighbor, your Chimp sets up camp in your basement and just starts using your sh*t at will. Here are more facts about your Chimp:

But your Chimp brain isn’t all bad. If your life is truly at risk, it will help you perform amazing acts of bravery, force you to eat grubs when you’re close to starvation, and help you fall in love and want to shag like a rabbit. Don’t get the impression that all your problems will be solved if you could just be rid of your Chimp. You need your Chimp. We’ve just got to make sure it’s well trained.

Your Professor brain is the only part of you that can actually think (in the sense that it can be conscious of itself, reason, think abstractly, and so on). Your Professor brain helps you manage money, purchase a house, select a partner, bake a cake, visit a doctor, plan your training program, and ponder moral and ethical conundrums. Your Professor brain got you through school and college. Driven by facts and logic, it’s motivated by honesty, compassion, and self-control, and it acts with a conscience, searches for purpose in life, and works for a sense of achievement. It does the intellectual heavy lifting required of good decisions. However, here’s the most important point to remember about your Professor brain: It deals only with facts, truth, and logic. If your Professor brain was in charge, you’d make smart, rational decisions all the time. However, because it takes time to weigh up pros and cons, consider alternatives, and think through rules and regulations, your Professor brain is notoriously slow. When the Chimp releases powerful neurotransmitters during the decision-making process, your Professor brain gets pushed aside or tricked. In fact, studies in cognitive science and behavioral economics have shown that your Professor brain is pushed, bullied, and tricked most of the time. Why else would you plow through a half-pound bag of Red Vines after 8 p.m., have orange skinny jeans in your closet, or buy yet another training kit that costs more than some families spend on groceries in a month?

We’re now going to add in a third brain to the mix. Wait, what? It’s not technically a brain on its own, but more a function of many different regions that help you run automatic programs like habits and routines. It also uses your memory banks to shape expectations you have of people and situations. It is akin to a computer’s operating system because it runs in the background, it’s extremely fast, and it helps you launch programs to deal with different situations. To borrow another metaphor from Dr. Steve Peters, it’s like a Computer brain.

The neuroanatomy of your brain’s operating system is very complex, and its functions occur in many different brain structures. Most important, your Computer brain helps you act automatically using preprogrammed thoughts and actions. Like a computer, it stores memories. Like a reference book, it stores information about your beliefs and values. We need a Computer brain because much of what we think and do must be automated in order to cope with the sheer number of decisions that need to be made every day (estimated at approximately 35,000!). When we learn skills well, we turn them over to the Computer brain to manage.

When you are born, the hard drive of your Computer brain is blank. As you grow up, it fills with information based on your education and experience. All information on the computer comes from what the Chimp and the Professor have given it. When the Chimp stores information on the computer, it is based on Chimp logic (paranoid, catastrophic, fear-based). When the Professor stores information on the computer, it is based on Professor logic (facts and reasoning). Your Computer brain has a limitless capacity for storage, but things that are associated with strong emotion get special treatment. This is more evidence that your Chimp brain stacks the deck in its favor. Your Chimp puts a lot of crap on your computer to promote its own agenda of staying alive and rewarding your instincts and drives for food, sex, ego, security, territory, inquisitiveness, and so on. Often we don’t focus on facts and logic but instead recall only emotionally charged experiences to help us determine how we feel about something. In some instances, this creates an extreme pattern of behavior that defies logic and reason but persists anyway. This is what causes phobias or irrational fears.

So, in a nutshell…

Your professor brain deals with facts, truth, and logic. Your Chimp brain deals with feelings, impressions, and emotions, based on instincts and drives. Your Computer brain acts like a machine that takes orders from the Chimp or Professor and runs stored programs based on your experiences and memories so you don’t have to think too much. These brain systems all fight for control.

Learning how to calm the f*ck down and rise to the occasion is about recognizing which brain is in charge and then doing some brain wrangling to get the right brain for the job back in control.

Related: Why Your Online Friends Can Make You Feel Like Crap