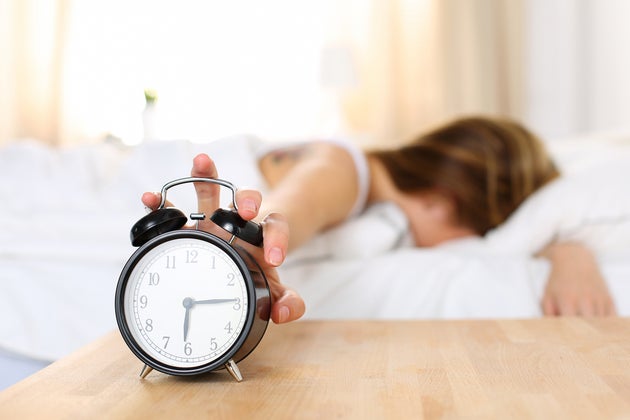 BEEP BEEP BEEP…That’s the sound of the alarm going off at 4:45 a.m. If you leap out of bed (or even crawl for that matter), put your running gear on and head out the door, then you can consider me your biggest fan. As a runner, we know there are two types of people: The early risers (the ones that pound the pavement before the sun has a chance to show its face) and the sunset chasers (the ones that for whatever reason choose to end the day with a few miles). There’s nothing wrong with either. I fall into the second group of runners. After a full day of work and a little time with the kids, I head out the door.

To date, there really hasn’t been anything wrong with this approach. I’ve been pretty successful in training for marathons and half marathons. but as the kids get older, work demands increase and schedules fill up with sports, homework, business travel and all the other stuff, my running has taken the brunt of the impact.

If you’ve followed me on social media or my blog, you know I’ve always wanted to be a morning runner but have lamented my lack of follow through in the hunt to change my ways. It seems so obvious. It would solve so many of my time challenges if I could just find an hour for myself in the morning. What’s so hard about that?! Well, turns out, my pillows must have some secret powers because once I hit them and actually fall asleep, getting up feels nearly impossible. So I’ve spent the past 30 days trying some of my readers’ favorite tips and tricks for becoming a morning runner to see if they would held the key to change. Did they work? Let’s break it down.

Schedule a run with a morning runner friend

Rationale: Knowing that you’ve committed to someone who ALSO woke up at 4:45 a.m. adds some pressure to the equation. The last thing you want to do is let someone down.
Win: This was probably the most effective. Knowing that someone was expecting me to show up really propelled me out of bed. The problem is that I don’t know if it’s realistic to think I can have a running buddy every morning.

Wear your running clothes to bed (or lay them out)

Rationale: Take the guesswork out of the morning routine by being one step closer to the door.
Win/Lose: I tried, but turns out that sports bras are the most uncomfortable thing to sleep in. I got up but only long enough to take it off and go back to sleep.
Tip: Go for the flat runner. It was definitely easier to get up knowing that they were there. No fishing around in the dark looking for socks and a bra.

Rationale: Sometimes you need an extra kick to get started. Set the timer on the coffee so it’s ready when you are.
Lose: I could rationalize my way right out of this. I’ll just reheat, I told myself. Who cares. Zzzzzzzz.
Tip: If caffeine isn’t your thing, how about allowing time to do some pre-run yoga as a way of getting your heart going, without going full bore during your run.

Rationale: If you know 8 hours is what you need, you might have to be in bed by 8:30 p.m. to get it.
Lose: This might be the crux of my whole issue but I can’t. My mind isn’t mentally ready to shut down. I tried getting in bed at 9:30 p.m. but I wasn’t asleep till 11:30 p.m. (per usual).
Tip: My problem is probably the fact that I’m working (or blogging) right up until the time I head to bed. I think there is a good reason for creating a buffer between work and bed. Reading, mediating are all better pre-bed activities.

Set your alarm to play some rousing run music

Rationale: Everyone has that song. You know the one that instantly gets you going faster. Seems reasonable to think if you play it first thing it’s bound to get you up and moving.
Lose: Turns out my reflex to hit the snooze button is stronger than I thought. I don’t even think I heard two notes of the music but the 8-minute countdown began.
Tip: It doesn’t matter what plays but the trick might be to put the alarm (a.k.a. the phone) out of arm’s reach. Putting it in a place that requires you to get up and walk to the phone will give you enough to time to realize you’re already up…might as well stay up. A secondary tip: Once you’re up, if you can, immediately make the bed. It won’t look nearly as enticing when it’s all made.

Rationale: So leave it to social media to guilt me into getting up.
Win: I posted a picture of my run gear laid out, you all knew I was planning on it. The chance that someone might ask was enough. A promise is a promise.
Tip: The beautiful thing about social runners is that no matter where you live, you always have a support system. Embrace it. Leverage it!

So where am I with all this morning running? The honest answer is I’m not fully converted and probably won’t ever be. I foresee a life where early morning runs can live peacefully with the occasional evening run. I depend on those evening runs to unwind after a stressful day. I at least know and have more confidence in the fact that I don’t need an ejector bed to get me up. If the desire is really there, I can make it happen.

How to Go From a 5K Runner to Triathlete