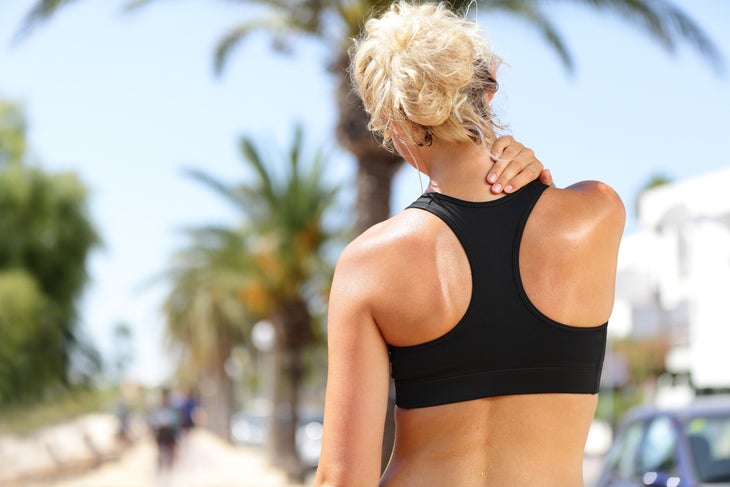 Republished with permission from Competitor.com.

At the end of a long hard run, you expect your legs and lungs to be burning, but your upper back? No way.

Unfortunately, “it’s a very common thing,” said Nick Studholme, a sports chiropractor in Colorado. As the intensity and length of a run increases, many runners will often experience a worsening sharp pain in their upper back, in between or under the shoulder blades. It’s not quite debilitating, but it sure is painful and annoying.

It’s particularly common in novice runners, said physical therapist Ben Shatto, but it can happen to anyone with poor technique or weak back muscles. And that’s most of us.

“Most people don’t get coaching on technique,” said Studholme, so we often have flaws in our form, which worsen as we fatigue.

As we get tired, our head tends to lean ahead of our body. This is generally for two reasons, said Studholme. Either we’re fatiguing and hyperextending the lower back, which leads to jutting the head forward. Or we’re essentially doing the opposite and slouching. Either way, once our head is in front of our body it puts pressure and weight on our upper back.

“It’s like a bowling ball on a stick,” said Shatto. That bowling ball is easier to hold when it’s straight up and down. But if you’re trying to hold it out at an angle in front of you, well, that’s harder. “It takes a lot of muscle to hold it up.”

The challenge with simply correcting your head position, said Studholm, is that if the other things that led to that aren’t fixed, then pretty soon you’ll be right back where you started.

There are other technique issues, too, that can contribute to upper back problems. We can hold our arms too high or too tight. Especially as we tire, our shoulders tend to rise and become tenser. Some of us swing our arms too much; some of us not enough. Studholm said, generally, he recommends an arm swing where your fist is next to your hip at one end of the swing and your elbow at the other. Many of us cross our body with our arms, creating torque on the upper back.

Related: 3 Moves To Help Runners Strengthen Their Upper Back

“Just because you have pain at x, y, z spot, doesn’t mean that’s the origin of your pain,” said Thomas Hyde, professor of sports medicine at University of Western States.

Hyde cites an example of a study where researchers looked at the fascia, connective tissue under the skin, in cadavers. When the fascia at the bottom of the spine was tugged on, it caused a counter-reaction felt in the opposite shoulder. If you’re feeling pain in your upper back when you run, it could actually be because of issues lower down the chain.

There’s also some research about the pain caused by peripherally sensitive nerves just under the skin, said Studholme. With repetitive motion, those nerves can get caught up in the tissue, which creates irritation. One of the things that makes those nerves so sensitive to irritation are changes in pH in that region. What one thing causes a change in pH? Lactic acid. Studholme said there’s some growing evidence that when local nerves are bathed in lactic acid, for example as you run longer or harder, that can make them more sensitive to irritation and ultimately cause pain. There are topical gels that can bring down the localized pH and taping methods that stop some of the nerves from getting stuck in the tissue. But then you’re still back to ground zero: fixing whatever caused the irritation in the first place.

For Shatto, fixing that initial issue is challenging. Much of our slouching, and the accompanying stress on our upper backs and shoulders, is “a function of society.” Runners aren’t different from everyone else these days—meaning that we spend lots of time sitting in front of computers or bent over our phones. “You’re always hunched over something,” said Shatto. That adds stress to the vertebrae and ligaments in our neck, shoulders, and back. We can deal with it most of the time, but when we start running it becomes too much.

“Those muscles get tired,” said Shatto.

Shatto recommends a series of exercises to strengthen the lower and mid trapezius muscles, and the rhomboid muscles, along the spine at the base of the neck, like shoulder extensions and pull-downs, as well as Supermans on the floor. Studholme also recommends targeting the serratus anterior muscles, which run along the side of the ribs up and under the shoulder blades. The difficulty is to get those muscles engaged without over-using the upper trap muscles, which is where most of us are dominant.

It’s also important to get your body to do the opposite of hunching forward and to stretch out the neck and upper back muscles. It doesn’t take a lot of time, especially if you do these things preemptively, but don’t expect to live your whole life slouched over and get rid of that pain after one stretch.

“If you spend 8-10 hours each day in front of the computer and you think 30 seconds on a foam roller is somehow going to change that,” said Studholme, well, you’re in for a surprise.