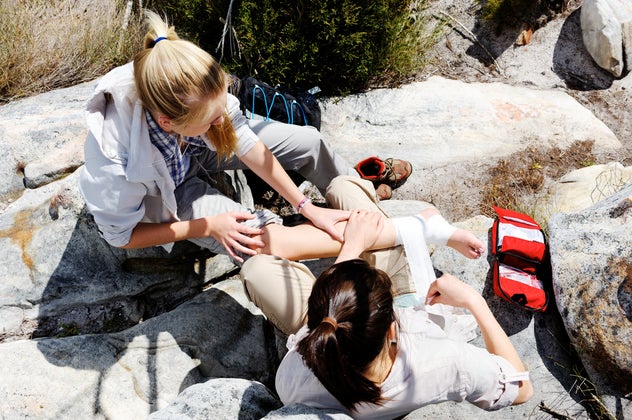 So you hit the dirt (literally) last weekend, and now you have a skinned knee. Trail running is a fun adventure—so filled with excitement, in fact, it sometimes leaves you with a souvenir to remember it by. Bruises, bug bites and other mementos earned on rugged terrain are painful and sometimes unsightly.

Alaina Nudell, ultrarunner and co-founder of the Ultra Medical Team, treats these afflictions all the time at trail races across the country. Heal quickly and comfortably with her tips.

These are the worst. After insects chow down on your skin, you’re left with tiny welts—the result of a mild allergic reaction to the bug’s saliva. And boy, do they itch!

The first step to faster healing is to avoid scratching (even though it may feel so good), as your nails can tear the skin and create the possibility for infection. Instead, seek relief from the “-caine” family: Lidocaine, tetracaine and benzocaine are all key ingredients in over-the-counter creams designed to temporarily relieve pain and itching.

Once the itching is controlled, apply some hydrocortisone cream to the affected area to soothe the red welts into submission.

These purple guys happen when a bump, fall or strike bursts capillaries under the skin. Once it occurs, it’s too late to avoid the development of bruising on the surface.

Some runners turn to naturopathic remedies, such as vitamin K cream or arnica gel (derived from the Arnica montana plant) to expedite healing. But keep in mind, studies have not found such treatments to be effective, says Nudell. “There isn’t really a way to make bruises go away faster, although you will notice the color changes over a week or so as it heals up and the blood is reabsorbed by the body.”

If you take a digger on the trail, the first step should be managing, not healing, the injury. Cover the area immediately, pressing down to stop the bleeding. Once you can get a good look at the gash, perform a quick assessment: Is the cut deep enough that you can see fatty tissue? Are there any impaled objects or debris? Does the wound refuse to stop bleeding? Are you dizzy? If so, get to a doctor immediately.

If the scrape is superficial, head home and wash up. “A good shower to clean the cut is really the best treatment,” says Nudell. “After that, placing a larger dry bandage over the scrape to protect it from contact with clothing, sheets or furniture is a good idea.” If you wish, an over-the-counter antibiotic ointment may also be applied.

For most trail runners, slices from thorny bushes in the thicket are worn as a badge of honor. However, that doesn’t mean they don’t require a bit of care: Once home from the run, take a shower and make sure the scratches are free of debris. They should heal nicely on their own.

Some runners swear by vitamin E oil to reduce scarring from cuts and scratches, a practice Nudell discourages: “Vitamin E has not been shown in clinical trials to reduce scarring and has even been found to make it worse.” Instead, keep the lacerated area clean and dry. Avoid wearing clothing that will irritate it further.