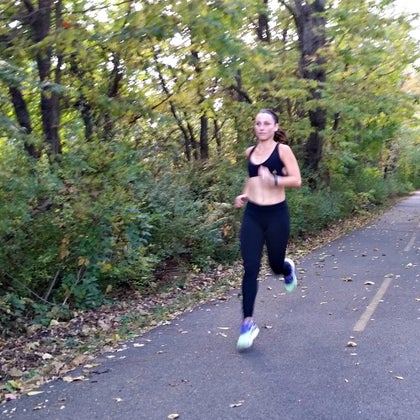 His response said it all. He didn’t get it.

I was running along my favorite paved trail this morning when up ahead a saw a car turn around at a crossing and stop right at the trail. I made eye contact with the driver as he turned around and something didn’t feel right. I kept running and as I got closer he got out of his car and said excuse me as started walking towards me. After the excuse me I didn’t hear anything else he said, my mind was occupied.

He looked harmless – but my gut said – keep running.

I’m almost 2 miles from my car.

I didn’t bring my phone with me.

No one knows that I went running and where I started.

I don’t have anything to defend myself.

I don’t have enough energy to even attempt to fight someone off if that’s the way this goes.

I don’t want my kids to lose their mom.

I’m going to say sorry and hope that this person, if they are harmless, realizes that it’s scary to approach a woman who is alone while she is running.

Maybe I offended this man, but I’m less concerned about how he took my words – I’m sorry, I’m not stopping – and am more concerned with keeping myself safe on a run.

It is unfortunate that this is a reality for female runners.

Not long ago I was running at 5-something in the morning around my town. It was dark and I ran down a road I don’t typically run on in the dark hours of the morning. I saw a man dressed in black walk out of the woods up ahead. At one point I actually questioned whether it was even a person because of where it was in the shadows of the street light.

I made a split second decision and turned around. I ran fast because I knew once I turned around I wasn’t really going to be able to see what was following behind me. I had passed two men earlier on my run and sprinted to catch up to them. When I got closer they said good morning and I told them what happened. I told them it was probably nothing but that I wanted to get ahead of them so I felt safer. One week later a woman was assaulted right where I had been running. It could have been nothing that morning, or it could have been something and I saved myself by turning around and listening to my gut. I’ll never know. What I do know is that it’s always better to err on the side of caution.

So this morning I said – I’m sorry, I’m not stopping – and I don’t regret it.

Read More About Safety On The Run:
5 Rules To Stay Safe During Night Runs
Stay Safe On Morning Runs