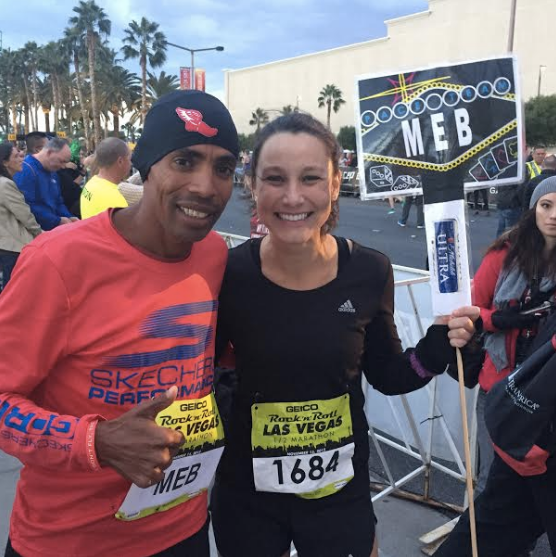 With more races happening on any given weekend than someone could count, how do you decide what race is best for you? Do you rely on race reviews to help you in your quest for the perfect-for-you race?

Consider these factors the next time you are reading a negative review of a race that someone left online.

Last year at the Rock ‘n’ Roll Las Vegas Half Marathon, there was some serious wind that—at points—kicked dirt up in your face. Depending on what corral you were in, you may have also had to deal with rain and wind.

Races can’t control the weather; what happens, happens. Race directors are just like participants, obsessively checking the weather once the ten-day forecast hits. Despite the weather, I added that race to my list of favorite races. Why? First I had the privilege of helping to pace Meb (that’s real speak for making sure I kept him running slow). When you are running with Meb, you could be running in Antarctica and still be happy. Also, it was my first time running the half instead of the full and it was nice being finished earlier than I had been in previous years. My review of the race was glowing, while other runners who started in the last corrals—who were out there longer and who had dealt with significant weather—were not so glowing. Take into consideration the time of year, average temperature and typical weather when picking a race, but don’t trust a race review that says not to run a race just because one year the weather wasn’t ideal.

Does the reviewer live close to the race or did they have to travel a significant distance? Traveling across the country for a marathon can be exhausting and that’s before you even get to the start line. In 2014, I ran the Honolulu Marathon. What—in hindsight—wasn’t all that bad of a race, was at the time one of the worst marathons I have participated in. It rained the entire race, I was exhausted from traveling from Virginia to Hawaii and I didn’t sleep well the night before, because of the low comfort-level of the hotel bed.

Had I written a race review immediately following the race, it would have been negative in regards to the course, the expo, the medal, the weather and the hotel. Was it the best marathon I’ve run? No way. But was it as bad as I felt a couple of hours post race? No. If you were a local that ran the race that year, your review may have been drastically different. When the cost involved in running a race is just the entry fee, you are less likely to feel disappointed in a race, than if you spent a thousand dollars when you added up travel costs, hotel costs, food and more.

How Many Races The Reviewer Has Run

Quantity is something to think about when reading any review online. Has the reviewer only run one race at that specific distance?

A dear friend of mine ran a local half marathon a couple of years back. It was hilly, partially on gravel and not an easy course, by any means. She had such a terrible experience that she basically stopped running for a year. If you asked her if she liked the race or she liked running, she would have said, “It’s terrible!” to both questions. She is back running now and has run a couple of 5Ks and guess what? She likes running.

What she may not have included in a review online had she written one, was that the half marathon she ran was actually her first race of any distance. So even if it had been a good experience overall, she wouldn’t have any way to compare the course and experience to other half marathons. It’s important to know who the reviewer is as a runner, how many races have they run, how long have they been running for and what are they looking for in a race.

How Well The Reviewer Ran (In Relation To Their Ability)

It’s hard to say a race was terrible if you are riding a PR high. Some of my fastest races have been run on less than ideal courses, yet I loved these races because I ran well. I have, however, been humbled many a time by races and the Boston Marathon is one of those races.

While I love the Boston Marathon because of the rich history surrounding it and because of the hard work and effort it takes to qualify and make it to the start line, it’s not my favorite. If you asked me which marathon I’d rather run, the Rock ‘n’ Roll Las Vegas Marathon or Boston Marathon, without a single doubt in my head I’d say Vegas!

If I sat down and compared the factors that go into that choice, one of them is that I have run well at Vegas and it’s fun when you are running well. On the other hand, Boston has stuck it to me four times and I’ve never felt great at the finish line. A race review is typically one person’s opinion as it specifically relates to them; consider that. A race someone really dislikes may be one you would love.

The Race Experience Behind The Race Review

Race directors love constructive feedback. They are constantly trying to improve the race from year to year. Contrary to what some may think, while many races are for profit, it’s not all about the money. Race directors are typically runners themselves and want you to have a good experience on race day.

Races love legacy runners and often do special things to honor the runners that return to the same race year after year. Every race is bound to—at some point—have an ‘off year’ or struggle with a hiccup on race day. If you rely on only race reviews from one ‘off year’ you may be missing out on a great race experience. Races change, so unless a race consistently gets a large amount of negative reviews year after year, you may just want to skip the reviews from an ‘off year.’

Enjoy reading race reviews? Like Mile Posts by Dorothy Beal on Facebook to keep up with mine!

How “Running Is A Metaphor For Life” Helps Me Through Pregnancy