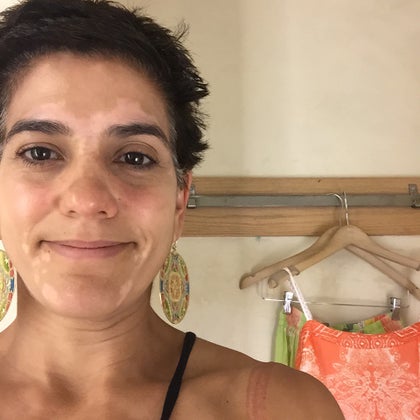 First of all, you should probably know what vitiligo actually is, before we get to the running part. I often refer to it as “Michael Jackson’s disease” since the ultra famous and ultra eccentric pop star was one of the most famous people to suffer from this autoimmune disease.

Vitiligo (pronounced vit-ih-LIE-go) causes your pigment to attack itself for no apparent reason, leaving blotches of white skin in its wake. About one percent of the world’s population has vitiligo, which is roughly 50 million people, and 2-5 million in the U.S.

I am one of those people and also happen to be an avid runner and triathlete. I was first diagnosed by my dermatologist in 2012, after I noticed some tiny white spots under my arms. My diagnosis was the beginning of a very long journey for me that continues to this day.

Although technically I’m white (I’m Cuban and Italian and have olive-colored skin), and this disease is seen mostly in black people or people with very dark skin, my white patches are still very obvious.

As a runner, I started becoming very self conscious of my patches of white since we runners tend to bare a lot of skin with our favorite pastime. I’m hoping this list not only helps others with vitiligo, but also helps those who do not have it understand what exactly it is and is not:

If you have vitiligo and want to connect with me, tweet me @vitatrain4life with #vitiligorunner.

Should Runners Supplement With Collagen?