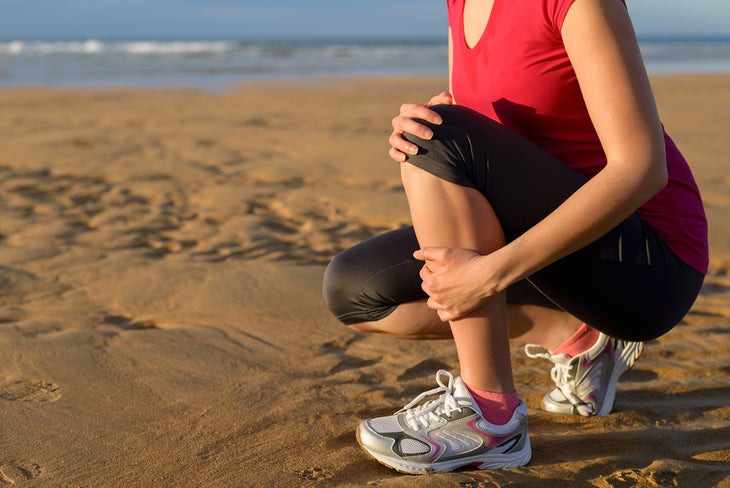 For the recent convert to endurance sports, an injury soon after starting to run can be both frustrating and, in some cases, may prove to be enough of an impediment that it dissuades further training. For many new runners, a common such injury is shin splints. Known medically as ‘medial tibial stress syndrome,’ shin splints are the most common injury to afflict runners. Fortunately, the injury is almost always self-limited and while not entirely preventable, can be mitigated by several factors.

Shin splints present as pain along the inner edge of the shinbone, also known as the tibia. The cause of the pain is inflammation of any of the muscles, tendons or the lining of the bone itself, the periosteum. When subjected to repeated microtrauma in the form of the constant impact, any of these structures can become damaged. Shin splints most commonly develop when there is a sudden change in either the amount or intensity of activity, although other factors also can contribute. Examples include using improper or worn-out shoes or running on very hard and unforgiving surfaces such as concrete. Anatomic issues such as flat feet may also predispose to the condition.

Runners are at the highest risk of shin splints, though dancers and military recruits may also be so afflicted.

The diagnosis of shin splints is fairly straightforward, but other injuries need to be ruled out. Pain from shin splints is most noticeable along the inner edge of the shin and is diffuse from below the knee down to above the ankle. The pain is often described as sharp and razor-like during exercise and dull and throbbing afterwards. There is often associated swelling in the area that is most painful and the pain is accentuated by pushing on the area with the fingers or hand.

Two other possible injuries that are more serious than shin splints may sometimes be confused with this injury and must be differentiated as they have more significant consequences and require more aggressive management.

The first of these is a stress fracture. Over time, repeated impact may result in a microscopic, incomplete breakage of the tibia. If it is not identified and treated, this problem can worsen with continued impact, to the point that an actual fracture occurs. The differentiation of a stress fracture from shin splints may be difficult in some cases, as the type and location of the pain may be very similar. With a stress fracture though, it is more common for the pain to be much more localized and focused in a smaller area. Another clue to the presence of a stress fracture is the fact that the pain is much better in the mornings after a night’s rest. Shin splints, on the other hand, often feel worse in the morning because of tightening of the injured soft tissues.

The second important diagnosis to rule out is that of anterior compartment syndrome (ACS). The anatomy of the lower leg is that it is divided into four compartments, each of which is separated from the other by tough, fibrous walls of fascia. If any of these compartments is too tight, blood flow to the muscles in that compartment can become compromised and oxygen levels can drop resulting in injury to the muscle cells. In some individuals, the anterior compartment of the lower leg is especially prone to this problem. With vigorous exercise, especially running, the muscles of the anterior compartment swell slightly, making the compartment too tight for oxygenated blood to get in. Consequently, the oxygen-deprived muscle swells further and the problem becomes worse. The principal symptom of this syndrome is pain that begins as a deep ache in the lower leg and progresses rapidly to be quite debilitating. With the cessation of exercise, the pain slowly dissipates. ACS is best differentiated from shin splints by the location of the pain that is on the outer aspect of the front of the leg as opposed to the inner edge of the bone. ACS causes no bony pain whatsoever. This differentiation is vital as left untreated; ACS can have long-term consequences. The treatment is surgical release of the compartment.

Once these two alternative etiologies have been ruled out, the management of shin splints is fairly straight forward and consists of some familiar modalities:

Rest: A critical component of the management, rest allows for the cycle of injury-inflammation-pain to be broken. How long one should rest is dependent on how severe the symptoms are. No less than one week at a minimum away from whatever the activity was that caused the injury is a good start. Additional time should be taken if symptoms persist.

Ice: Local application of ice is a time-honored way of decreasing local inflammation and has an important role in treating the swelling and pain of shin splints. Ice should never be applied directly to the skin as this can be potentially deleterious. Instead, wrapping ice in a towel and placing that on the leg for 15-20 minutes at a time three to four times per day is advised.

Anti-inflammatory medications: Non-steroidal antinflammatory medications (NSAIDs) such as ibuprofen are the mainstay of pharmacotherapy for shin splints. These medications have the dual benefit of relieving the inflammation at the heart of the problem and of reducing the associated pain. Like all medications though, NSAIDs may cause side effects and so should be used according to the manufacturer’s recommendations and for as brief a period as possible.

Proper footwear: As mentioned earlier, worn out shoes or shoes not supportive enough for running contribute to the development of shin splints. Wearing supportive shoes in good condition is helpful in both treating the problem and in preventing its recurrence.

Orthotics: These are of limited value except for those who have flat feet in whom they may be extremely helpful. Orthotics can be custom made or purchased in pre-made sizes and shapes.

Stretching: Tightness in the calf muscles may exacerbate shin splints. Stretching these muscles while convalescing the injury may accelerate healing and prevent recurrence.

Once shin splints have healed, it is time to return to running—but how this is done is crucial to ensuring that the problem does not recur. It is important to note that cross-training is a vital component of both healing and preventing shin splints. Swimming is an excellent means of getting exercise during the healing phase of shin splints and cycling too can often be done without pain. So when it comes time to get back to running, make sure that you keep up with the other sports as well so as to not increase running too quickly.

The best means of preventing shin splints is simply to progress slowly with both volume and intensity:

Once pain-free running has been established for several weeks under these parameters then it is time to introduce varying surfaces and topography. For most people, following a regimen like this with proper footwear should be more than sufficient to defeat the curse of shin splints and enjoy pain-free running.

About the Author: Jeffrey Sankoff, MD is a three time Ironman and 70.3 World Championship qualifier. He is an Emergency Physician at Denver Health Medical Center in Denver.