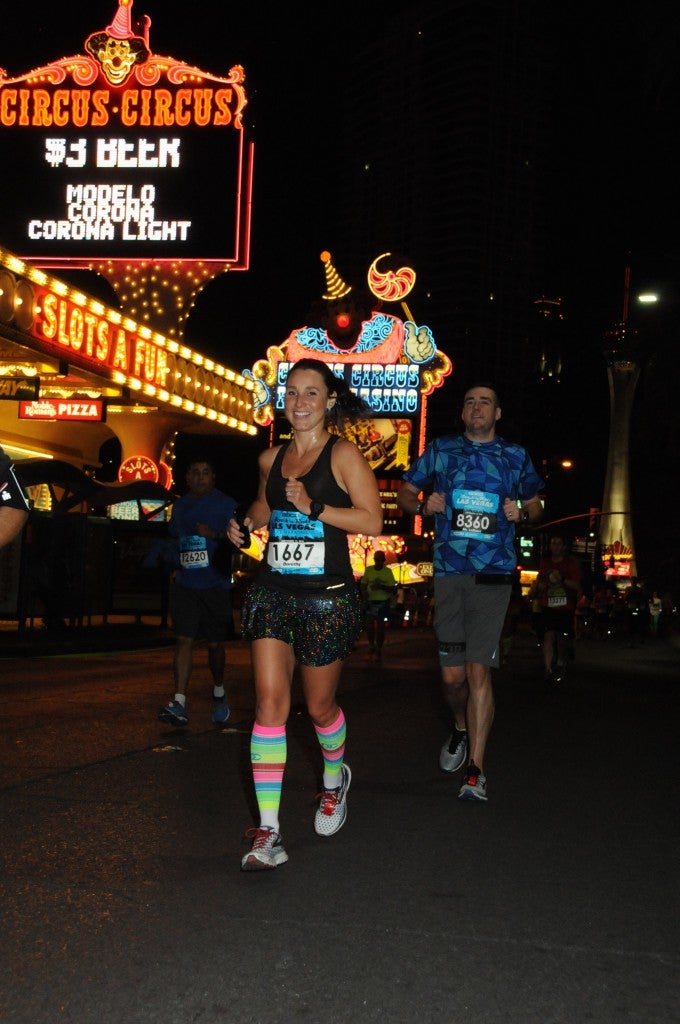 For years I wondered what my true potential was in the marathon. From almost the exact moment I finished my first marathon I found myself thinking, I could have gone faster. The soreness was barely gone from my legs before I signed up for another marathon, running my second less than a month after the first.

My thoughts were confirmed when I ran almost 6 minutes faster than my first with barely a month between the two. After I finished my second I immediately thought, I could have run faster.

Two years later I dropped my marathon time down to 3:59:52. Running that lovely sub-4 for the first time was exhilarating. Again I thought to myself, I could have run faster.

That night while celebrating with friends at a local bar, there were two other 20-something girls wearing medals around their necks. My 3:59 suddenly felt inadequate when I heard they had qualified for Boston that day.

Three years and two babies later, I did run faster. A 3:36:41—qualifying me for Boston for the first time (Note: the time standards were slower in 2008 than they currently are).

I felt good about myself when I walked into the Boston Marathon expo hall—in my eyes I was finally fast.

Fast is a funny thing. It’s relative—fast can mean a 10-minute pace to one person while that pace could be painfully slow to another. Fast only gives you confidence if you don’t compare your fast to someone else’s fast. I was trapped in comparisons.

At the expo my mom said, “Isn’t it fun seeing other people carrying their numbers? You can see who you are faster than.” What?!

Maybe I knew going into the race that bib numbers at Boston are based on how fast you are, but up until that moment it didn’t truly click with me.

I don’t remember what my bib number was, but I can tell you that I finished the race as the 10,082 runner across that line. Over 10,000 runners were faster than me on that day.

Instead of being happy with another Boston qualifying time, I felt a twinge of defeat inside. You aren’t so fast after all, the little doubt demons said.

Now, I know I’m not Shalane or Desi—I’m certainly not Amy Cragg and I won’t ever come close to even the sub-elites in this sport—but I’ve always wanted to get to a level where I “felt fast.” Call it lifelong insecurities—call it whatever you want—it’s how I felt.

The endless pursuit of being better in running was first and foremost in my mind at all times. Better meant faster; never ever did it occur to me that I could improve as a runner but still not get faster. Everything was about the number.

Later that year, I ran a 3:35 marathon and came in third place. Third. I was devastated inside. I had trained really hard. I had two children and when I wasn’t spending time with them, I was running or thinking about running. I went into detail about my disappointment on my blog and waited for the comments to roll in about what an awful time 3:35 was when I had trained for a sub 3:30. This is how warped my mind had become.

Never mind that the 3:35 was a PR and that the faster you get in the sport of running the harder it is to drop chunks of time. I had improved from a 4:20 to a 3:35 and it wasn’t enough. I was sure others would feel that way too.

A couple of weeks later, I ran the Marine Corps Marathon as a redemption race. I finished with a shiny new PR of 3:31. It was cool to PR, but inside I felt disappointed in myself. Yes my legs were tired from running a marathon less than a month prior, but I wanted that sub 3:30 I had told everyone I was training for. I should have run faster.

In March of 2010, I dropped my marathon time from a 3:31 to a 3:21 winning a small local race. It remains one of the happiest days of my life—only now I know that the happiness I felt that day wasn’t completely tied to my place or pace.

Hitting 3:21 was both good and bad for my own self-worth. I was so close to another mile post in running that I felt compelled to go after it. Weeks after that marathon I found out that I was unexpectedly expecting. It was a HUGE shock to me. I remember crying on the bathroom floor immediately after finding out. Yes, some of it was pregnancy hormones, but if I am honest with myself—and with you—I was sad that I wasn’t going to be able to go after my goal of sub 3:20 that year.

In hindsight all this sounds ridiculous, insane, possibly even selfish—but it’s how I felt. Colton, my third and last baby, was born in November of that year.

It wasn’t long after he was born that the number obsession returned. When others would say I was obsessed, I quipped, “You don’t know what dedication looks like.” I would get up at insane hours or run in what felt like the middle of the night because I HAD to train. Never mind that I was nursing my baby and trying to take care of two toddlers, all while remaining sane in those HARD early years of motherhood. I was determined and goal oriented and I didn’t mind if running defined me. My self-worth was completely tied up with my marathon PR.

Four months after Colton was born I ran three marathons—yes you read that correctly. The first was a 3:26, a race I was internally disappointed with all while smiling on the outside. I followed that with 3:30 at Boston where I ended up in the medical tent for the first time, annoyed and disappointed in myself again. I found a local marathon close by, I will run it as a redemption race, I thought. The 3:23 I ran that day was good enough for second place.

I was riding the marathon high and didn’t for once stop to think that my body had just cooked a human and I subjected it to three marathons in five weeks just four months after my third child was born. I was just THAT dedicated to improving as a runner. If only I could get back to all those lost snuggles with my newborn, I’d take those over any marathon or PR.

Later in the year I ran a 3:13 marathon. 3:13—I was fast, really fast in my eyes. I followed that race up with another marathon a couple of weeks later, just because I could, and ran a 3:21. Not bad for my fifth marathon of the year, I thought.

During this time, my blog grew from a little blog to something larger. I now had more eyes on me than ever. Still not the most secure person in the world—comments that told me I was slow or fat stung deep. I knew inside I was neither of those things, but I’d be lying if it didn’t make me question my self-worth on more than one occasion.

If only I could go under 3:10, maybe I wouldn’t get these nasty comments. Maybe then I would be fast. The need for speed was my singular focus in life.

On March 4, 2012, I ran a 3:11 marathon. I was elated—yet also sad. I had trained for a sub 3-hour marathon and felt in shape to run that. Sad over what is still my fastest marathon?! That was the obsession though, the obsession of never being enough. The obsession that lead me to define who I was by the speed at which I ran.

Four years later I’m exactly where I want to be—a place where I no longer define my self-worth by a number. Not my weight, not my speed, not my age, not the circumference of my thighs.

This past weekend, I ran Rock ‘n’ Roll Las Vegas Half Marathon. After the race a friend asked me how I did, I said emphatically, “I PRed in FUN.”

The pursuit of a PR is not something that is intrinsically bad. Running faster than you ever have before can be exhilarating and joy-filled. Having dreams and chasing goals can bring focus and strength. For me though, instead of bringing true joy, it brought on feelings of never being enough.

Where am I now?

I’m running for the LOVE of running. Some days that means getting excited about a kick-butt workout and other days it means being excited about seeing friends and having too many drinks before shuffling through a race. The truth is that no one knows what time I ran this past Sunday and no one cares. What people do remember from the weekend are the fun times that were had and the memories that were made.

Do I love running any less than I did in the past? No, I’d argue I love it more. When I let go of the obsession it made room for joy to return, both from running and from other things.

My self-esteem and self-worth is not tied to my PR any longer. I am not a 3:11. I am Dorothy: a mom, a lover of life, a runner and a wife. There is so much more to me than running.