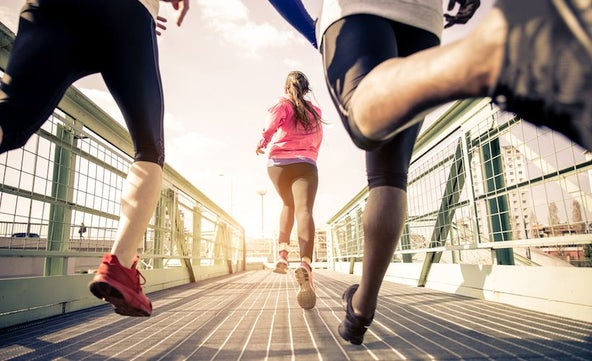 I wish I could say that I’m one of those people who ran track in high school, kept up with it my entire life and now run 7-minute miles. Sadly, I’m not. After being a gym rat for many years, I started running at the ripe old age of 29. As my 30th birthday approached, I felt this overwhelming urge to take on a new physical challenge. I’m a December baby, which is coincidentally the same month as the drawing of the New York City Half Marathon lottery. Throwing caution to the wind, I entered my name into the drawing. With no running experience whatsoever, I didn’t really think about what would happen if my name was pulled. Well, my life was forever changed that December when my name was selected, my credit card was charged and I had four months to learn to run 13.1 miles.

Related: These 5 Simple Habits Can Make You A Better Runner

During my training for that race, I learned a lot about pace and mileage. Using a training plan, I carefully plotted the distance of every run and used my brand new GPS watch to track my distance. In addition to tracking mileage, I began tracking my pace. I didn’t really have any time goals; I just wanted to cross that finish line. But every training run became a careful calculation of pace and distance, and that’s how I ran for four months. It was all a numbers game. I finished my first race—13.1 miles—in about 2:30.00.

I think the decision that I made after the race is what made me a runner. I decided to keep on running, and I signed up for more and more races. That first year, I ran nine races in total. I loved setting new PRs and challenging myself to run different distances. The numbers game was thrilling, and it made me fall in love with the sport.

Fast forward four years: I’ve run 10 half marathons, countless shorter races and one marathon. Every time I run a race, I’m proud of myself. But like most runners, I sometimes get down on myself when I’m not as fast as I’ve been in the past or when I skip out on the last mile or two of a training run. I always strive to be a “better” runner, and time and distance is how I measure that success. Or it was–until a few months ago.

I recently became friendly with a woman who doesn’t race much, but she loves to run. We decided to run together, and during our first meet-up, I asked about her normal speed and mileage, just to make sure we were on the same page. “I don’t know. I never keep track,” she told me. Um, what? How is that possible? She told me that she usually goes out for an hour, but she never wears a GPS watch. “But how far and fast are you going?” I asked. She replied that she didn’t know or care. As someone who became a runner to conquer a certain number of miles, I couldn’t quite comprehend what it felt like to run without a sense of time and distance.

After that exchange, I decided to try her method. Like most runners, I know the mileage of my favorite route, so I changed things up a bit. I thought of a place I wanted to run and headed out the door. Unfortunately, it was one of those days when every step felt torturous. In the past, I would try to force myself to maintain my standard pace. But without a watch, I just ran at the pace that made me feel good. And a funny thing happened…the torture subsided and I felt good again.

Suddenly, I had a moment of clarity. Didn’t I start running to feel good? Yes, the sport makes me feel great 90 percent of the time, but there are days when I’m fighting with myself to go faster or to not cut off that last mile. I ultimately end up feeling angry with myself when I lose those inner battles. Not wearing a watch meant that those battles never happened. I had no idea if I was running an 11-minute mile or an 8-minute mile, and it was liberating.

Did I come home and throw my GPS watch out the window? Of course not. But I did let myself relax and realize that not every single run is about the mileage or pace. Sometimes it’s about getting out in the fresh air and clearing my head. Other times it’s about listening to my body when it tells me to slow down. While I definitely still track my pace and mileage when I’m training for a race, I try to keep one run per week as a fun run without a watch. I go as slowly as I want–and no one has to know!

10 Thoughts I Have While Using My Fitness Tracker

Stop Looking At Your Watch And Learn To Run By Feel