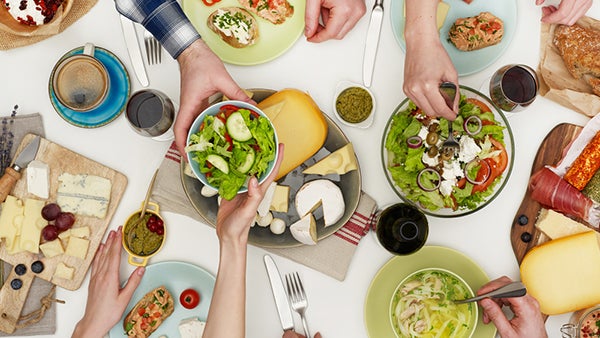 This article originally appeared on Competitor.com

Though many of us intuitively feel that family meals are beneficial, there is also clear scientific evidence that children who eat more frequently with their families are physically and psychologically better off.

Specifically, kids who eat more frequently with their families gravitate toward healthier foods such as fruits and vegetables and tend to stay away from unhealthy foods such as soft drinks and fast food. As a result, their intake of fiber is higher, as is their intake of important vitamins and minerals. It’s an effect that seems to last well into adulthood, as kids who eat more frequently with their families end up continuing their healthy food choices and eating habits, including cooking at home and eating with others as adults. Of note, children who eat the same foods as their parents also have better diets and enjoy their food more. Based on this fact, parents don’t need to give in to the pressure to let picky children demand a separate meal or dictate the entire meal.

Beyond improving diet, higher family meal frequency may also stem obesity patterns in children. Some data shows that the odds of being obese are greater in kids who eat less frequently with their families. But for kids who aren’t already overweight or obese, the chances of becoming obese don’t seem to be related to family meal frequency. Finally, there is also data that does not describe a relationship between weight and family meal frequency, highlighting the fact that childhood obesity is a complex multifactorial problem but not diminishing the idea that family meals can be an important part of the overall solution.

The most striking benefit of family meals, however, is not just physical—it’s psychological. Kids who eat more frequently with their families have lower rates of eating disorders such as binge eating, purging, or anorexia. They exhibit less high-risk behavior, including substance abuse, violent acts, sexual promiscuity, and disciplinary problems at school. High family meal frequency is also related to improved self-esteem and academic performance. Frequent family meals are also associated with lower rates of depression and suicidal thoughts. Interestingly, the positive effect of family meals seems to be greater in girls than in boys, especially for factors such as disordered eating.

Much of this psychosocial benefit may be explained by the simple fact that family meals improve communication between parents and their children. Essentially, family meals give parents an opportunity to actually parent. In fact, it is thought that eating with our children is the basis for how we teach them basic social skills, ethics, language, and culture. For example, at only 12 months of age, young babies point at objects at the dinner table, not only because they want something but also because they want to share an experience. Not only do babies want to share food, they want to share emotions and a sense of belonging. From the very start of human life, eating together is essential to figuring out our basic relationship to others and the world.

Complete footnotes and references for studies cited above are available in the print edition of Feed Zone Table.