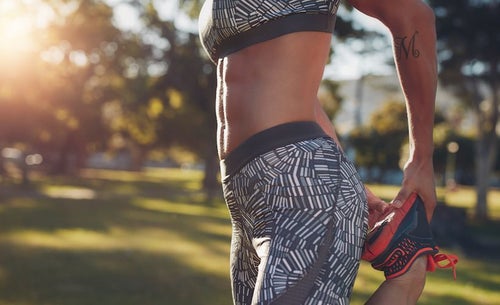 When I decided to become a runner, I had two goals in mind: one, run very fast times, and two, have six-pack abs like the elite runners cresting the record boards. In my preteen mind, those goals went hand in hand. After all, I didn’t know of a single elite athlete who didn’t have a chiseled stomach. So, I committed to a strict training regimen and diet. I was only 13, but the math seemed simple enough: ab workouts would give me six-pack abs, which meant I would run fast like the elite runners, which meant I would be really good. Therefore: I needed to do intense ab workouts to succeed athletically.

Unfortunately, the only immediate result was a poor body image. Shortly thereafter, I developed a severe eating disorder. And, though the anorexia was spurred on by non-running-related factors, I can’t help but think that my ab obsession played a role.

As miserable as I was during that time, I was thrilled that I’d achieved my elusive dream. I finally had visible ab muscles. My stomach was one of the only things that made my happy during my eating disorder, and it was the hardest thing to let go of when I finally embraced recovery.

For four years, I felt like I had the perfect runner’s body. The only downside was that it couldn’t run. It was too beaten and broken. Too malnourished. So finally, I let it go.

By that point, I was halfway through college, excited by the prospect of finally getting to run for my college team. As I pursued healthy living, I rediscovered my love for running. I began running well and feeling strong, so I shoved down the poor body image that assaulted me every time I looked in the mirror. I traded my rigorous ab workouts for functional core strength training. And it seemed to be working.

But all the while, I told myself it was only temporary. I never deleted the Pinterest images and webpage bookmarks, each claiming to deliver “6-Pack Abs” in a matter of weeks. I hid them away, promising that when I was done with collegiate running, I would revisit my dream of having perfect abs.

I’m entering my seventh week as a post-collegiate athlete, and my stomach looks the exact same as it did in February. I’m doing very similar training to what I did in college: no crazy ab workouts, no dangerous dieting plans.

As I reflected on my college career, I realized how fun running has become. I also realized how easily I could screw that up by neglecting proper training. So what if my body doesn’t fit the elite runner mold? I might not look like a Nike model, but I’m running faster and stronger than ever before.

I did it. I had the stomach that an elite runner is “supposed to have,” and it took an eating disorder to get me there. Now that I have the freedom to go back, I see that it’s not worth it. I’m not about to chase after an appearance that never delivered on its promise. I’m chasing after my best.

5 Important Signs That You Suffer From A Distorted Body Image

Everyone Is Freaking Out About This Powerful “Body Image” Video