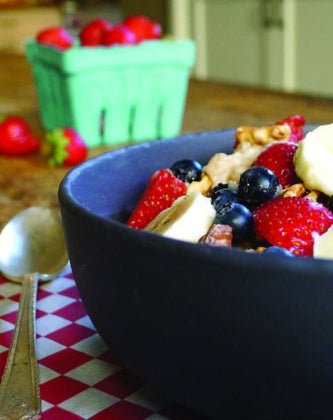 This recipe has been elite runner Shalane Flanagan’s go-to breakfast before all of her hard workouts and races for more than eight years. It’s fueled her through her marathon debut in NYC, the London Olympics and when she nabbed the American course record at the Boston Marathon. It will be in her upcoming cookbook, Run Fast Eat Slow, written with Elyse Kopecky (Rodale, Fall 2016).

Flanagan has this oatmeal bowl before every race with coffee and coconut water, and for longer races she’ll also often include toast with almond butter and honey. Being slightly superstitious and true to her Irish roots, she brings along her favorite brand of oats, McCann’s Quick Cooking Irish Oatmeal, whenever she’s on the road (by using boiling water from an electric tea kettle, she can make this breakfast in less than 5 minutes).

Combine oats, banana and ¾ cup water in a microwaveable bowl. Microwave on high power for 1–2 minutes, or until thickened. Mash banana slightly and stir in milk, walnuts or almond butter, and raisins or berries. Top with a sprinkle of cinnamon and a drizzle of honey.