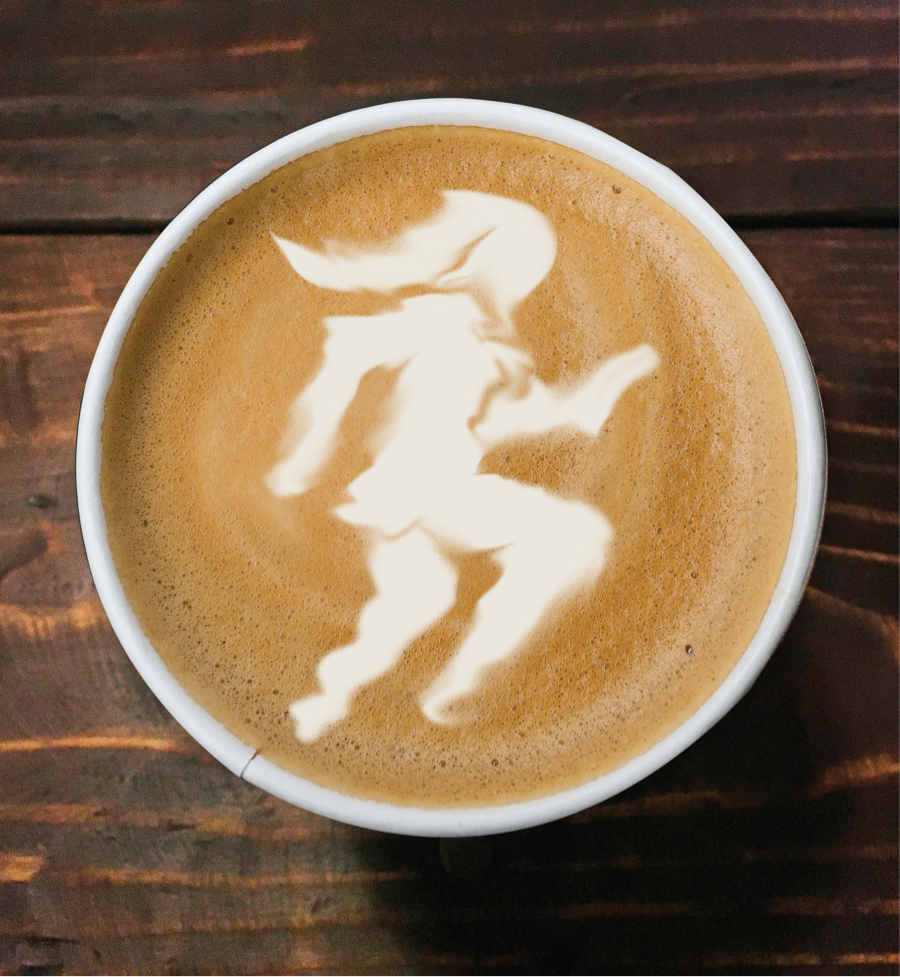 Whether you require some fuel in your tank before your sunrise runs or like a little boost mid-marathon, caffeine may well be part of your fueling routine. However, there are many misconceptions about caffeine and its usage, including what dosages are appropriate and how it actually impacts performance (if at all?). We spoke to sports nutritionists Chrissy Carroll and Nancy Clark to separate fact from fiction, and here’s what we found out…

We’ve all heard “coffee is a drug,” but is it really? Carroll, a registered dietitian and author of Eat to Peak: Sports Nutrition for Runners and Triathletes, states that while caffeine isn’t addictive in the same way nicotine is, it is a stimulant to the central nervous system. “People do adapt to a certain level of caffeine use,” she says. “If you nix the daily coffee(s), you might experience withdrawal symptoms like headaches and irritability—but people aren’t draining their savings to score a fix of Dunkin’ Donuts! The withdrawal symptoms go away after a few days as your body adapts back to operating without caffeine.”
Verdict: Partially true.

It’s dangerous to consume caffeine before a workout.

When people think about having caffeine pre-run, the response is sometimes, “But my heart would explode!” However, Carroll says there is no reason for an otherwise healthy person with no known heart conditions to be concerned. “Excessively high doses at once may cause your heart rate to increase and should be avoided,” she says. “However, it is not dangerous to consume moderate amounts of caffeine (such as a cup of coffee or a caffeinated energy gel) before a workout, and this can actually improve performance.” Runners who are known to be sensitive to caffeine or have medical conditions that may be impacted by caffeine should consult their doctors.
Verdict: Mostly false.

It’s possible to build an increasingly high tolerance to caffeine.

Over time, people who regularly enjoy caffeine eventually need a larger dose to produce the same impact on alertness and energy levels. However, this is not an endless cycle, as it can be with other drugs. The body eventually finds a set point for the amount required to experience a performance improvement. “Even runners that drink coffee all the time still get a boost from caffeine,” says Clark, a registered dietitian and author of Nancy Clark’s Sports Nutrition Guidebook. While it may seem logical to think that eschewing caffeine for a few weeks and then resuming use right before a big race could produce better results (aka a “coffee taper”), Clark states that this is unnecessary. “Researchers in Australia have found that when people give up caffeine for a short time, they feel horrible, but when they get back to it, they just feel normal. There’s no added boost from cutting back on caffeine for a short time, so there’s no reason to go through the agony of giving it up in the first place,” she says.
VERDICT: Partially true. 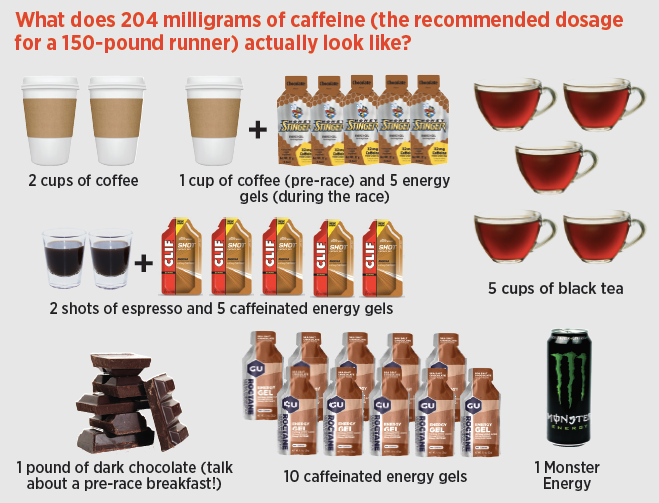 Caffeine can offer a valuable energy boost during a race.

Studies conducted as recently as 2016 suggest that caffeine can boost performance by an average of 2 to 3 percent. Carroll concurs, noting that an average person needs 3 to 6 milligrams of caffeine per kilogram of body weight. For a 150-pound athlete, this dosage (204 to 408 milligrams) is equivalent to a few cups of coffee, or one pre-race coffee and five energy gels taken throughout a race. Sports nutrition companies take the variation in runners’ caffeine consumption and sensitivity into account when creating products. The amount of caffeine included in an average gel (about 20 milligrams) “is intended to provide a slight energy boost and help extend the effects of caffeine consumed previously,” says Gu Energy Labs sports nutritionist Roxanne Vogel. Runners who do not regularly ingest caffeine or are particularly sensitive to its effects may see a boost at lower dosages, such as 1.5 milligrams of caffeine per kilogram of body weight. But higher dosages of caffeine may actually contribute to detrimental effects, such as a higher heart rate, restlessness or an upset stomach. “Whether or not you decide to utilize caffeine depends on your personal habits, sensitivity and medical conditions,” Carroll states. Caffeine is also not a cure-all for exhaustion. “Runners need to look at the source of their tiredness,” Clark says. “Sometimes, a lack What does 204 milligrams of caffeine (the recommended dosage for a 150-pound runner) actually look like? of calories is the biggest issue, and caffeine may not necessarily help.” Both Carroll and Clark agree that runners should practice caffeine consumption during their long runs in order to determine the ideal amount and timing.
VERDICT: True.

While caffeine is a mild diuretic, Carroll states that current research does not suggest that it contributes to dehydration or negative effects on fluid balance during exercise. In fact, exercise negates any diuretic effects. This appears to be the case regardless of the manner in which caffeine is consumed (whether it is coffee, energy gels, chews, etc.), according to a 2015 meta-analysis. Of course, runners must make sure that they are hydrating properly during the event itself in order to avoid dehydration due to reduced fluid intake. Drink that pre–long run cup (or two!) with no worries.
VERDICT: False.

Caffeine stays in the body for a long time.

Carroll notes that there are many factors that impact how quickly you metabolize caffeine, including your overall consumption, tolerance and genetic makeup. “Your body clears about half of the caffeine you take in over a period of four to seven hours, but that time frame can be much lower or higher,” she says. Runners who have a hard time falling asleep at night or who wake up frequently should stop drinking caffeine at least seven hours before bed to see if their sleep improves. You need all the energy you can get for your workouts, after all!
VERDICT: True.

The Performance-Enhancing Power of Caffeine

The Benefits Caffeine Consumption Has On Running Performance

How to Eat and Drink Away Sore Muscles