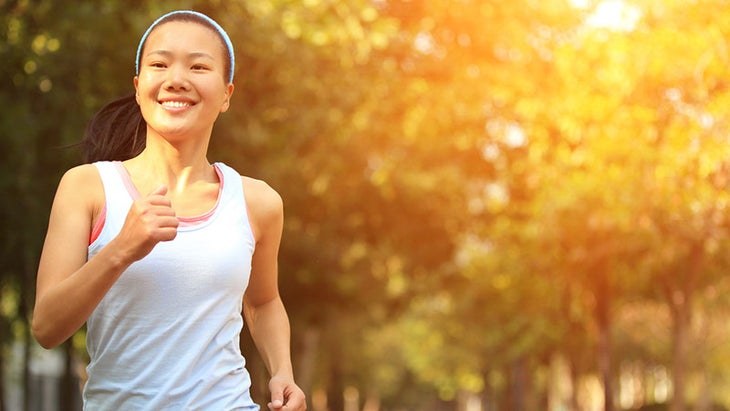 Runner’s high is real—just ask any runner—and now, scientists may have found an explanation for it.

A new study published by Cell Metabolism concludes that running-induced endorphins stem from leptin, a fat cell-derived hormone that signals to the brain when the body has enough fuel and energy. The new research suggests that falling leptin levels “send a hunger signal to the brain’s pleasure center to generate the rewarding effects of running.”

“Based on these findings, we think that a fall in leptin levels increases motivation for physical activity as a means to enhance exploration and the pursuit of food,” senior study author Stephanie Fulton of the University of Montreal said in a press release. “Our study also suggests that people with lower fat-adjusted leptin levels, such as high-performance marathon runners, could potentially be more susceptible to the rewarding effects of running and thus possibly more inclined to exercise.”

Low leptin levels have previously been linked to exercise addiction and fast marathon times in humans, as well as greater running speed in mice. But this is the first time it’s been linked with the feeling of euphoria many runners get.

The scientists used genetically engineered mice that lacked STAT3, a leptin-sensitive protein which relays the leptin signal specifically in neurons that release dopamine. With a running wheel in their cage, the STAT3-deficient mice ran almost twice as much as normal mice and spent more time in a part of the cage that had the running wheel, suggesting that a drop of leptin-induced STAT3 correlates with an increase in the rewarding effects of running.

The scientists plan to further explore this link, testing the hypothesis of running reward being associated with food seeking among other theories.

“We do not want people to think that leptin is the only metabolic signal controlling the rewarding effects of running,” Fulton said. “Likewise, dopamine is not the only brain chemical involved. More work is needed to parcel out the precise contribution of dopamine, opioid and endogenous cannabinoid signals and the manner by which they interact to impact physical activities and its rewarding effects.”

I Finally Discovered The Runners’ High

3 Ways You Can Become A Happier Runner