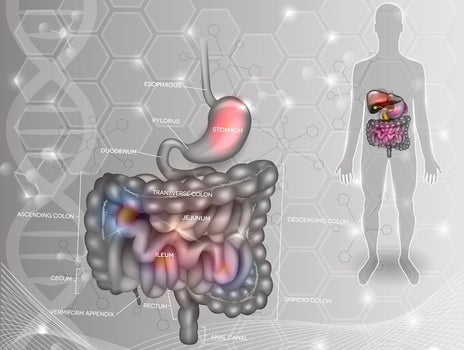 A Conversation With Ph.D. Embriette Hyde

If you’re not planning on having a meal soon, continue reading! Right now outside a lab in Southern California, Embriette Hyde, a scientist at the University of California San Diego, is studying human waste. In fact, she’s spent the better part of the past two years with the American Gut Project, an organization centered around studying the function of the human microbiome, the research of which could potentially allow scientists to someday cure diseases and create super athletes.

After recovering from Lyme disease and wondering what “the best possible microbiome for a racer would be,” Lauren Petersen, a scientist at The Jackson Laboratory for Genomic Medicine in Farmington, Conn., decided to find out. When interviewed about her findings, Petersen suggested the research could not only be the future of probiotics but could potentially create stronger, quicker and faster to recover athletes.

When the internet exploded with that news, Hyde cringed.

“It sounds like a cliche, but scientists have just scratched the surface where this research is concerned,” Hyde said during a recent phone interview. “Something like ‘poop doping’ is not only dangerous, it’s probably not effective.” She went on to explain that Petersen gave herself a fecal transplant because she was sick with a disease–and, once the symptoms were relieved after the transplant, “of course she’s going to be a better biker!”

Throughout our conversation, Hyde continuously pointed out just how little scientists know about the human microbiome, how many variables remain and why taking probiotics is neither the best nor the worst idea. Since most of us would be happy with simply being a little healthier and aren’t as concerned with shaving seconds off our time to win gold medals, we discussed how the average runner can improve their own microbiome community.

A microbiome is a community of microorganisms–such as bacteria, fungi and viruses–that inhabit a particular environment and especially the collection of microorganisms living in or on the human body. Popular science writer Carl Zimmer put it best when he wrote, “Your body is home to about 100 trillion bacteria and other microbes, collectively known as your microbiome.”

We sequence the bacterial DNA [a lab procedure scientists follow using stool sample collections] of sick versus healthy individuals and try to find the differences between the two. We’re looking for differences in bacterial communities, but there is no cause and effect.

Do athletes have different or better microbiomes than everyone else?

Different yes, because they show an increased diversity of bacterial communities, which is healthier for many reasons. However, we don’t know what “healthy” is, per se. There’s no actual baseline for “healthy” because what is our full human potential to be healthy? No one knows. We do know that an athletic gut has reduced inflammation and more nutrient availability, but it’s actually easier to study a sick or diseased person’s microbiome than that of someone who is “healthy.”

What are your thoughts and recommendations on probiotics?

There is good evidence that very specific strains can help very specific conditions. The difference with [studies that assess the effects of probiotics used to alleviate diarrhea and respiratory illnesses] and taking a probiotic from your grocery store is that the findings came from ethics-approved trials in groups of consenting humans, not companies building a product they can sell.

Currently, probiotics are at a “grass status,” meaning they are generally safe for consumption and the FDA will leave producers alone as long as they are not making any claims. Hyde suggests that a better alternative to probiotics is to consume fermented foods like kombucha and sauerkraut. “We know it makes the gut healthier,” she said, noting that she does this herself and adding, “it doesn’t hurt and it tastes good–so why not?”

What are your best recommendations for runners to improve their gut health?

Eating enough fiber is very important to your diet, since human cells cannot break down dietary fiber. This is why foods like complex carbohydrates break down quickly and can lead to a sugar crash. “American diets are typically low in fiber, but fiber definitely positively affects the microbiome,” Hyde explained. “I have no qualms about having everyone consume more fiber.”

When it comes to running in particular, Hyde stressed the importance of drinking enough water and documenting how much you drink to be sure you’re properly hydrated. “The biggest thing is drinking water. When I started tracking it and [consequently] started drinking as much as I should, I had a lot more energy!”

Say Goodbye To Gut Issues With These Tips And Tricks

What The Heck Is FODMAP–And What Does It Mean For Runners?