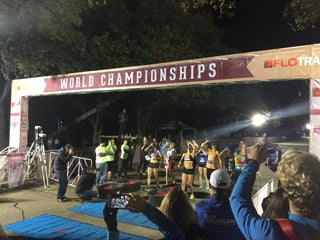 It’s tough to imagine any “expert” would suggest you pound a few shots while you’re lacing up for a run, but it appears that drinking the hard stuff isn’t just for a post-run toast.

A study in the Journal of Cardiovascular Medicine found that three shots of whiskey (diluted with water) didn’t significantly impact treadmill runs for 10 healthy white men. Not sure why that was an official study, but there you go.

Since attending last year’s Beer Mile World Championships in Austin, I’ve been hearing about more and more interest in the four-lap, four-beer race. My neighbor and his running group are currently on the lookout for a place to try one. We’ll see if they have the guts to simply walk on the nearby high school track and do it. (I probably shouldn’t egg them on, but my money is on Kate for the win!)

Perhaps next time mimosas at brunch or an early football game makes us consider skipping a run, we’ll reconsider. Perhaps.