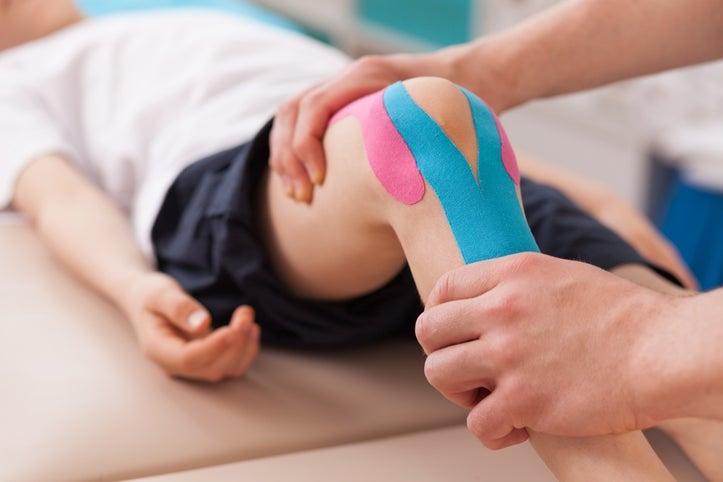 There’s nothing more irritating than a pesky injury that gets in the way of your training. However, kinesiology therapeutic tape is a great quick fix. Athletes, especially runners, find comfort from something as simple as a strip of sticky tape. According to KT Tape’s website, it’s designed to provide support and alleviate muscle, ligament and tendon pain. They also explain that it’s an effective temporary use for injury.

Both elite and average runners have relied on the magic behind kinesiology tape to keep their pain to a minimum. I can certainly attest to the efficacious results from wrapping my nagging foot before competing in my championship race. Admittedly surprised, I finished my race with minimal discomfort thanks to the tape. Something as basic as this webbing, in fact, has a significant amount of science behind it.

Unlike the typical, familiar athletic tape, which is used for wrapping a joint or tendon to aid the problem, kinesiology tape is placed in an assortment of strands on and around the given area of distress. Graceann Forrester, a physical therapist who instructs clinicians on how to use the tape, explains, “It’s pulled to differing degrees of tension to create the desired effect.” It’s often worn for a couple of days, dissimilar to standard taping, which is normally just used for an activity.

Forrester says that the tape can be used to pull up the skin, therefore creating an area of low pressure where fluid can move and drain. Others believe that it gives stimulation to skin cells because it touches the pain in that spot. In other words, it’s as if you were applying pressure, or rubbing down the area that’s bothering you. “It allows the muscles to go on vacation for a day or two so they come back healed,” says physical therapist Holly Moriarty from Gainesville, Va.

Dr. Kenzo Kase created Kinesio Tape in the 1970s. He wanted to design something different from the typical inflexible and stiff athletic strands that many athletes would turn to for healing. “It’s made of cotton over elastic fibers; it’s breathable, flexible, and mimics skin’s elasticity,” according to Karena WU, P.T., C.S.C.S., C.K.P.T., the president/clinical director of ActiveCare Physical Therapy in New York. The brilliance behind it is that it provides neurosensory, which ameliorates pain. It then helps to trigger the neuromuscular response and the stimulation of muscles. Gavin Daglish, a physiotherapist at Mike Varney Physiotherapy in Harlow, Essex, U.K. says that “It allows free movement of lymphatic fluid. It reduces friction between the tissues in the skin.” In other words, it helps to take the stress off the muscles.

Related: How And Why You Should Tape Your Neck

So, if you’re faced with an unfortunate injury, consider giving kinesiology tape a try. It won’t take away the pain entirely, but it may provide you with the comfort you need. I can attest to the “magic.”