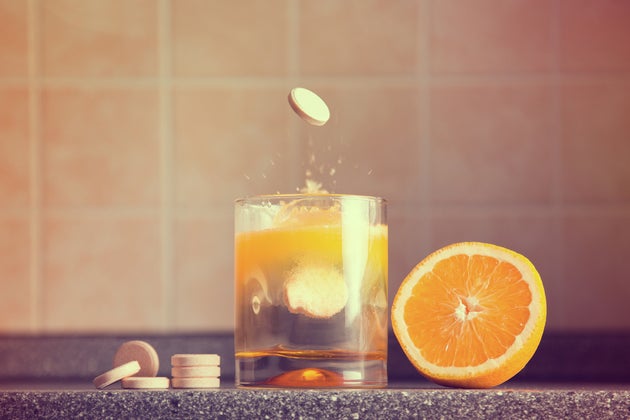 Nothing makes me more nervous than the threat of catching a cold the week leading up to a race. As a matter of fact, I’ve been known to add a mega-dose of Vitamin C to every meal during race weeks. Although I know that the Vitamin C in my food is probably enough to ward off the dreaded common cold, I figure that more is always better, right? Well…not really. I took a look at the research about Vitamin C and found some surprising info about this everyday nutrient.

It’s common knowledge that Vitamin C plays a role in immune function, but the extent to which it prevents and cures the common cold is up for debate. Research suggests that supplementing with Vitamin C every day will not reduce the incidence of colds, but it might decrease the duration of the cold by 8 percent. To put that into perspective, a cold may last for nine days instead of ten. In other words, there’s no need to overdose on Vitamin C to prevent catching a cold. Research also states that Vitamin C will not reduce the duration or severity of an existing cold.

Because athletes (specifically marathon runners) put such physical stress on their bodies, they actually have a weakened immune system and a higher risk of developing upper respiratory issues. The jury is out on whether or not Vitamin C supplements help prevent these conditions in runners, but this makes it all the more important for runners to eat a well-balanced diet with plenty of vitamin-rich produce.

Should you take a Vitamin C supplement?

For simple immune-boosting potential, there’s no need to take a Vitamin C supplement. Not only does food has enough natural Vitamin C, but the body absorbs vitamins from food better than a supplement. Everyone is familiar with citrus’ high Vitamin C content, but it’s also prevalent in plenty of other foods. Try adding these foods to your diet to easily get the recommended 60 milligrams per day.

For the inflammation and asthma fighting properties, it’s probably better to take a supplement. Choose the pill form rather than the sugary packets that dissolve in water. The general consensus is that 1,000 milligrams is more than enough.

Alternatives to Vitamin C might work just as well.

Research suggests that getting the recommended amount of zinc (8 – 11 mg) may help ward off colds just as well as Vitamin C. Zinc is found in oysters, beef, cashews, chickpeas and fortified breakfast cereals. Recent research suggests that probiotics may also be helpful in preventing upper respiratory tract infections, but the studies are still very preliminary. However, with 70 percent of the immune system living in the gut, there’s no reason why you can’t add a probiotic to your daily regiment. And of course, any fruits and vegetable will help prevent inflammation. As with everything nutrition related, there’s never a downside to eating as many fruits and vegetables as possible.

The 5 Best Budget-Friendly Proteins for Athletes