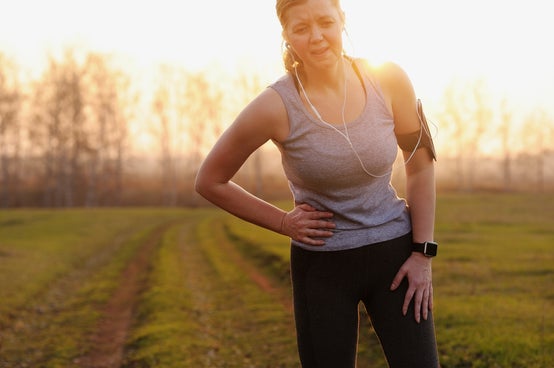 I am training for a half marathon, and right now, I am up to 8 miles. Usually, my long runs are on Saturday mornings, while I do the other runs at night after work. I’ve run a few mornings during the week, and I keep experiencing side stitches during my morning runs between miles 4 and 5. It gets so bad I literally have to stop and just put pressure on my right side. It’s so bad, and I end up walking for a little bit. I am 5’8″, 127 pounds. When I do my morning runs, I have half a bagel in the morning with peanut butter, maybe 4 oz of coffee, and 24 oz of water. I eat breakfast at 5 a.m. and run between 6:30 and 7 a.m. Am I eating too much? Too little? Side stitches have only happened to me on my morning runs, and I do not want to experience them in my half. Any advice would be appreciated!

Here’s what runners had to say…

…it could be a breathing issue:

Greg Thomas: Combating the “stitch in the side” often focuses on proper breathing technique. If you typically take a lot of shallow breaths while running, the diaphragm remains in a high position and never lowers enough to allow the connective ligaments of the liver to relax. The diaphragm becomes stressed, and a stitch results. Learning how to “belly breathe” can prevent the stitch from occurring. To belly breathe, contract your abdominal muscles, and pull your stomach in as you exhale. Try to force as much air out of the lungs as possible. Then inhale as much as you can. As you inhale, your abs should swell, pushing your stomach out and allowing room for your lungs to fully expand.

Sean Donovan: Side stitches are caused by inadequacies in breathing pattern while running and being poorly trained; I used to get those when I FIRST began running for the first few months, and then they completely stopped. Every single new runner I know gets them frequently. I think the culprit is you being undertrained, OR you are exerting yourself harder on morning runs and not able to sustain the proper breathing pattern. Also, stopping and pushing into your ribs with your fingertips will help.

Elizabeth Lord: Usually, stitches are breathing-related. Control your breath. If that doesn’t work, cut out the food before your run. Maybe have some fuel if you really need it. Good luck.

Kim Kunich McKinney: I also only have stitches when my breathing is out of whack. Got that down now and very rarely have one unless I am talking a lot during my run. I also am not a big fan of a meal before my run either.

Nikki Feasel: I used to get side stitches, but I found that exhaling as the opposite foot of the side stitch hits the ground works for me. You blow like you’re blowing out a candle. I haven’t had one since. I also don’t drink anything other than a coffee and eat blueberries before I run.

David Stroshein: I would watch your breathing while running. Make sure to breathe at a controlled pace like if you were swimming freestyle. Keep a pattern to it.

…it could be a water issue:

Whitney Howell: I’m actually going to go with too much water in your system that early. The bagel and peanut butter makes a great carb/protein combo. If you’re used to the coffee, that should be fine. But, that much water sloshing around in your stomach at that time could be causing the problem. Cut that back a bit, and see what happens. There will be plenty of water stops along your half course when you finally hit race day.

Bridgette Jenkins: Laura, I definitely think it’s the liquid. I would try eliminating that first (as well as paying attention to your breathing. I’ve also found that the opposite foot strike method works when I over hydrate). If that doesn’t work, try holding off on the meal until after the run.

Chuck Hein: I would eat half that amount (or nothing) and 8 oz of fluid, and pay attention to your breathing. Maybe slow your pace if your breathing is forced. Is mile 4-5 downhill? I’ve had stitches going downhill or if I over stride (more bouncing strains diaphragm).

Melly Mel: Bagel, peanut butter and the coffee are great, but there’s too much H2O before the run. Perhaps you can intake a bit during the runs. But your pain IS being caused by too much liquid in your system, plus you might just might have to adjust your breathing.

If you have a question for Women’s Running, feel free to email editorial@womensrunning.com or comment on any of our articles on Facebook!