Learn how your regular runs can add up to better health—and when a run might actually compromise your health.

Ask any runner, and you’ll hear the same refrain: “When I feel a little cold coming on, I lace up and sweat it out.” They’re quite confident that running can ward off just about any illness.

During this season of sniffles, coughs and the dreaded H1N1 flu, such a thought is great consolation. But can you really fend off a cold just by running? For the truth on this and other commonly held beliefs, we turned to Dr. David Nieman, Ph.D., a professor and director of the Human Performance Lab at Appalachian State University and the North Carolina Research Campus. He’s spent more than 20 years studying how running and other forms of exercise affect the immune system. And with 58 marathons and ultra marathons under his belt, he understands the challenges endurance athletes face.

Plain and simple, no matter how restorative your run may feel, no research proves it helps combat that cold. Instead, a temporary serotonin boost might account for your overall sense of well-being. Though running won’t cure what ails you, running with a minor cold isn’t likely to make it worse. However, if you have something more serious than a cold—and let’s be honest, sometimes it’s hard to know—you should really bench yourself. In a recent study of horses infected with the influenza virus, exertion caused their symptoms to be prolonged and more severe. Nieman cautions, “All the best animal studies show that sickness is made worse by exertion.”

Okay, so we runners already know we are a healthier lot, but this news may be the best reason yet to keep logging those miles. Regular running (approximately one hour or less on most days of the week) helps you avoid those nasty upper respiratory tract infections caused by the more than 200 viruses that cause the common cold.

In a recent study (published in the International Journal of Sports Medicine), we found that 45 minutes of exercise at a brisk pace for five days a week caused sickness rates to drop in half,” Nieman says. “There’s no supplement or drug that knocks out sickness rates like this.” He likens the effect to how different your house would look if you brought in someone to clean for only 45 minutes each weekday. It’s the simple maintenance that can produce a profound effect over the long run—no pun intended.

The study “showed that during exercise and three hours after there was enhanced circulation of important immune cells,” Nieman adds. He explains that for your immune system to fight viruses, your immune cells need to “get out and touch” the virus in order to respond. In other words, anything that gets your immune cells out of the lymphoid tissue and circulating is a good thing. “My analogy is to think of it like having the police in a moderate-sized town circulating around versus sitting in the coffee shop,” Nieman says. 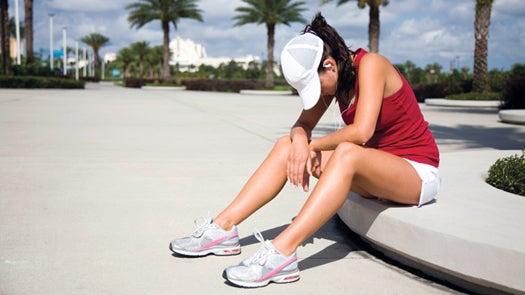 Keep in mind, however, that these findings are based on moderate exercise. “We’ve also shown in the lab that the immune system responds in a positive manner up until about 75 minutes of exertion; after 75 minutes stress hormones rise, and even more so if you continue beyond 90 minutes,” Nieman says. Still, you can feel free to dismiss all those naysayers claiming you’ll make yourself ill if you run too much—Nieman found in the well-known 1987 L.A. Marathon study of 2,300 runners that people did not experience increased sickness until they went beyond 60 miles a week. So, unless your running partner is Deena Kastor, you can relax and relish the benefits your immune system is reaping.

You are more likely to get sick immediately following a marathon.

This isn’t exactly breaking news, but what’s interesting is that there are strategies marathoners can use to combat illness during the vulnerable period—deemed the open window—which lasts approximately one day after exertion, according to Nieman.

In the L.A. Marathon study, we found that there was a six-fold increase in the chance of getting sick among runners who finished the marathon compared to runners who registered for the race but didn’t run that day for some reason other than illness,” Nieman says.

It underscored something he had heard repeatedly  from fellow marathoners: They felt protected during their normal training, but believed they are more likely to get sick after a race. He explains that this finding led to a series of studies about what happens to the immune system after heavy exertion. “The immune system doesn’t function normally because in this ‘open window’ of immune dysfunction, viruses can multiply at a greater rate than normal,” Nieman says.

But take heart, you don’t have to steer clear of marathons—or live in a bubble—to stay healthy.

Nieman advises marathoners to take charge of all the other things you can control: Get plenty of sleep, reduce mental stress and don’t lose weight rapidly during training (defined as more than a pound and a half per week.)

Other than taking these precautions, he says your best bet for faring well during the open window is to follow the rules your mother taught you. Wash your hands often; keep your hands away from your nose and mouth; and, of course, eat plenty of fruits and veggies.

Jeana Durst is a health and fitness freelance writer and runner based in Tampa, Fla. She’s celebrating the long-awaited cool temperatures by stepping up her mileage and hoping this will keep her out of the doctor’s office this flu season.

7 Questions You Probably Have About Running Right Now, Answered By Experts