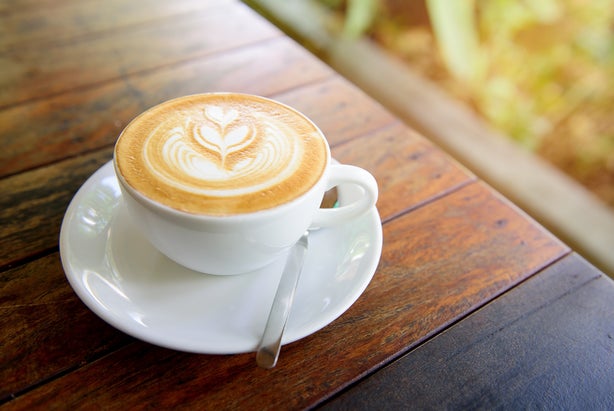 It doesn’t sound like that long of a time period (and maybe that’s really telling), but 17 days without any caffeine is an eternity to someone who had at least one double-shot latte a day. What started as a treat after a hard run or a pick-me-up only on sluggish mornings quickly developed into an addiction-like habit every morning. It was as much about the security blanket of a beverage in my hand as it was about the jittery caffeine kick I received.

What’s even worse? I even started to feel immune to the jitters. Even worse than that? It was digging a hole in my bank account. Five dollars a pop, plus the occasional muffin? That adds up quickly! Even worse? It had been a huge player in my distorted treatment of my body, knowing that the espresso often has laxative effects that “came in handy” whenever I felt like it. Not good.

So one day I quit—cold turkey. I wanted to see how different I could feel if I gave up my favorite worse habit for two whole weeks. It came at a perfect time too; I just started training for a fast spring half marathon. My dad had quit caffeine years ago and promised it did wonders to his heart rate while he was riding his ElliptiGO. I wanted to see if I could reap the same benefits and possibly discover my own benefits along the way. Here’s what happened.

I am less tired overall.

Think of it this way: You get a massive spike that catapults you to the top of caffeine mountain, only to come crashing down later. Maybe you get a second fix, maybe you don’t. Either way, by the time night rolls around, I was always exhausted. But it was always okay, because you just do it all over tomorrow, right? So on and so forth. I feel like there was never a time for my body to calm down and benefit from the workout high, which has always been a natural energy booster for me. I was always covering it up with one shot, two shot, three. Once the initial shock and crankiness of zero espresso wore off, I felt balanced and turned my focus toward more ways to carry energy throughout the day.

Confession: I do not eat enough green things. That’s reason number one for starting every morning with a green smoothie. Reason number two: It wakes me up and has me in a better mood throughout the day. Almost three weeks later, I’m excited to blend it up, and I even add an extra handful of spinach to feel extra super healthy.

Again, my dad noticed a significant shift in his heart rate when he didn’t consume coffee before a ride. I never drank espresso before running, but I feel it could have had the same long-lasting effect since all the lingering caffeine just never had a chance to full leave my body. I also tend to assume it’s because a) I’m getting energy from a better diet and b) I’m not having jointing energy spikes throughout the day, which always end in a crash.

At first this was strictly a money-saving experiment. I had friends ask me, “Why don’t you just get an at-home machine? It will pay for itself in a few weeks.” Well, first part of the joy of supporting local coffee shops (shout out to Gordy’s!) and being on a first-name basis with the baristas. However, after seeing that I feel so much better without espresso, plus I’m saving on average $30 per week, I just don’t want anything but another bag of spinach. Maybe three more bags for the freezer.

My cravings have gone way down.

I’m a grazer; I’m the one who snacks throughout the day. When I would be at the top of my caffeine spike, I would want to eat to calm myself down, but it was never thoughtful or productive eating. It was snacks, kind of like those drunk munchies we’ve all had but maybe don’t talk about. Combined with starting the morning out with a smoothie, giving up caffeine has flatlined the worst cravings and made me a more reasonable human being. I won’t lie and say my diet is squeaky clean, but there’s definitely less munching.

On the 18th day, I got my regular icy drink to see how I felt. Was it in my head? Did I really feel better? More importantly, how would I feel after having one drink preceded by 17 days of nothing? The answer: I felt like crap and threw out half the drink.

Do I still have addictive thoughts, like maybe if I get one more, it will be fine? Sure. I do all the time. But I literally threw out half my drink on Sunday because I felt sick and way too shaky, so I tend to remember that more than anything. It was a straight bad habit to keep juices flowing when I needed to write or edit, which turned into a “I really, really need it” bad habit. Will I ever have a latte again? Definitely, sometime, but it won’t be seven days a week.