Most runners have been taught to load up on carbs before a run. What you eat before a run can greatly affect your performance—it’s simple science, right? After spending some time trying to understand the role food plays in running a marathon, I took on a high-fat ketogenic diet. And let me tell you, it was a doozy.

I decided that I was going to change to the ketogenic diet and see how that helped me in my journey to lose weight. I knew my body didn’t do well when I ate a lot of carbs, so trying a high-fat diet seemed it may work better for me. Going ‘keto’ seemed perfect for what I was looking for.

A lot of people hear the term “train gain” (when a runner gains weight while training), and I was the number one example of that. Whenever I would begin training for runs and adding more miles to my days, my body weight increased. A ketogenic diet, which comprises only eating 5 percent of carbs a day, seemed like the golden ticket. However, I knew it wasn’t going to be easy. 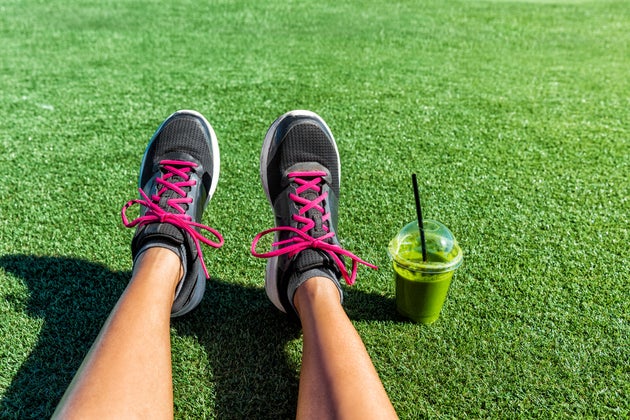 The Begining Of My High-Fat Diet

The first week on the diet was a nightmare. I was exhausted every day from the lack of carbs I was eating, and the cravings were unreal. I never knew I could crave pasta so heavily until I stopped eating carbs completely. My day would comprise waking up, going to work, and laying in bed if it wasn’t a run day. I was that tired. I was grumpy all the time, especially at the gym and before a run.

My training included running twice a week for 30 minutes and increasing my miles on the weekend. My weekday runs were challenging. I put a lot of my energy into making sure I was on track with the diet. I pushed and kept telling myself I could do it, and the 30 minutes flew by. When it came time for my weekend run, I was drained. Between training for my challenge run (which included doing a 10K and half marathon) I was also lifting five days a week. My body was definitely angry at me. The weekend called for a 7.5-mile run, which I thought was going to be simple. It was under 10 miles so I had it in the bag, right?

My First Long Run While Keto

The first mile was great. I felt good, my pace was good and I had Paramore blaring through my headphones. I figured I could do it. Then suddenly I rounded the corner onto mile two and my body had enough.

I found myself feeling fatigued with each step I took. My body felt hot, and I could feel a huge headache coming on. Right before the 2.5-mile mark, I texted my boyfriend and told him that I felt like I was going to pass out. I stopped, re-hydrated, took a deep breath, then continued on my run for another 2.5 miles before quitting.

I was so mad at myself for not completing my entire run for the day, but I knew my body had hit its limit. It needed more time to re-adjust and learn how to turn all the fat I was eating into energy. I continued on my running and ketogenic diet journey the following week, telling myself I wasn’t going to let this setback derail everything.

The following weekend I had a 4-mile run and ran the entire thing with no issue. I had more energy and the run didn’t cause me to get fatigued like it had previously done. My body finally adjusted to the ketogenic diet. I was able to power through these long-distance runs by learning that the fat I was eating could also be used for energy. Not to mention, I learned how to make a keto chocolate cake, which gave me life. Although it took some time for my body to get used to this diet, I noticed that each run was getting easier.

As the weeks whittled down, and I was closer to my challenge, my body was doing fantastic. Two weeks out from my challenge run, I did a 10-mile run. It was tough—but not impossible—and I finished with a pretty decent time. By race day I was ready. Although I was nervous, I had confidence that my body could carry me through both races.

Fueling 19 Miles On A Ketogenic Diet

On race weekend, I chowed down on more Quest bars then I want to admit. I tried to keep my foods light on both Friday and Saturday night to help prevent fatigue—but I did eat a lot of protein to keep me full. The changes that I saw and felt were incredible. I noticed that I wasn’t as tired through either of the runs as I had formerly been during training—and even the same run I had done in May. My body also wasn’t as sore as it had previously been, Obviously I had the usual soreness of knees and hips, but overall, my body felt powerful and strong.

I finished my 10K with a new PR and my half marathon with a solid time. Even though my body was sore, I felt great after both runs and even went to Disneyland right after. I was overjoyed that the work and dedication I put into these runs really paid off. Besides the training, I had an amazing support system as well, helping me with my diet and pushing me when I was about to quit. If I had to do this experience all over again, I would.

Yes, it was extremely hard but after the first two weeks, it was easy and I felt great throughout the rest of my training. If you’re wondering, I stopped my ketogenic diet once I got to Disneyland—because how can you pass a churro up after a 19.3-mile weekend?