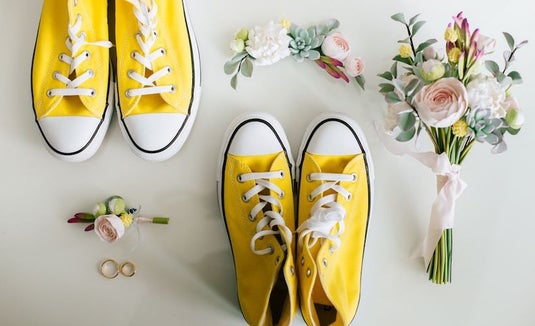 Matt and I were extremely excited for this race…to be OVER! Now don’t get me wrong, we were somewhat looking forward to this race. It’s just that directly following the race, we were flying to Germany for Oktoberfest. The anticipation of beer steins and Bavarian pretzels greatly overpowered our enthusiasm for running in Philly.

To add to the excitement, a few weeks before the race, I accidentally discovered that Matt had purchased my engagement ring (oops!). I was convinced that he would pop the question at Oktoberfest: another reason I wanted this race to be OVER.

I was going crazy with my suppressed elation—Oktoberfest and a likely engagement—it was too much to handle! To maintain my sanity, I funneled all of my energy into the last bit of pre-race training. We had recently moved from Phoenix to Chicago, so in an attempt to make new friends, I joined Fleet Feet Chicago’s running group. Being able to train with such speedy runners resulted in me feeling fast and strong. I knew that I could potentially PR in this race, so I vowed that I would focus on training, with absolutely no distractions. Matt had a different plan in mind.

Related: Why Marriage Is The Ultimate Marathon

A week before the race, Matt asked if I’d like to go on an evening walk to Lake Michigan. I thought it was a random request, but I happily agreed, enjoying an excuse to be a bit of a tourist. I got home from work and was greeted with two dozen roses. Again, I thought it was a bit unusual, but nothing completely out-of-the-ordinary. Getting ready to leave for our walk, Matt questioned my choice of attire: “Maybe you should wear a dress?” Now certain that Matt had something else planned for our evening, I slipped into the dress I’d worn on our first date. As we started walking, Matt recounted all of his favorite memories, describing in detail when we first met and fell in love. And that’s when it all clicked. I suddenly knew what was about to happen: he was going to propose! As we reached the lake, Matt paused to “admire the view” and dropped down on one knee. He asked me to be his wife, and I agreed in an instant.

And, just like that, all concern for the upcoming race vanished. Amidst calling friends and family to share the news, celebrating with our friends who came into town and admiring my new bling, race training was the least of my concerns. (Good thing it was taper time!)

When we arrived in Philly, I tried desperately to get into the zone. I wish I could say that my pre-race visualization techniques and concentration efforts were successful. In reality, I can barely remember race day. After a mile jog with Matt to the start line, I called my mom for some pre-race inspiration. Instead of talking about the race, we gabbed about my recent engagement, talking about possible wedding dates and venues. During the race, things did not improve. Instead of focusing on my pace and running form, I was replaying images from our engagement. It was a lost cause. In the end, I finished with a 1:49, nowhere near a PR. Matt had a similar “just okay” race, and you know what? We were both more than okay with that.

For once there was something more important than our race results. Newly engaged, the fact that we didn’t PR or place in our age groups seemed irrelevant. With the race done, we were finally off to Oktoberfest, and we had more than pretzels and beer to fuel our excitement. We could now fully celebrate our engagement!