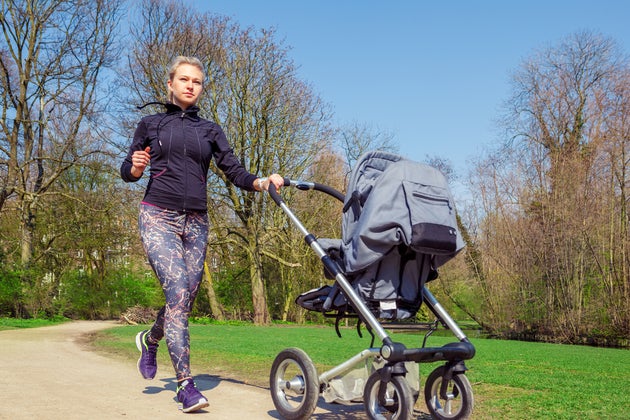 Having a baby changes things, a body included. And while every pregnancy, birth story and postpartum experience differs, common physical changes—many of which aren’t talked about nearly enough—abound. “Many women learn a lot about themselves and their bodies during pregnancy—I mean, a lot,” says Heather Milton, senior exercise physiologist at NYU Langone’s Sports Performance Center in New York. How do those discoveries translate to running?

For intel on issues relating to the pelvic floor, foot size, frame of mind and more, we checked in with a few experts for advice on what to expect.

The pelvic floor—a network of muscles, ligaments and tissues that supports the organs of the pelvis—is a foundational wonder that can take a beating during pregnancy and birth. And the resulting pain (in the pelvic region, lower back or glutes) and urinary leakage are frequently swept under the rug. “When a woman sees her provider post-pregnancy complaining of pain or leaking, she often receives the reply, ‘Well, you had a baby,’” says Ellie Meyrowitz, a physical therapist focused on sports and women’s health at REP Lab in Bend, Oregon. “We are doing female athletes a disservice [with] this philosophy.”

Even if a major problem doesn’t exist, be patient as you return to not only running, but to normal activities, too. Katy Bowman, a noted biomechanist and author of Diastasis Recti: The Whole Body Solution to Abdominal Weakness and Separation, suggests starting out with long walks to avoid putting too much initial stress on the pelvic floor. She also recommends testing its status with simple movements: Practice getting down to and up from the floor, both unweighted and holding your baby. If you notice leaks, your pelvic floor is most likely not ready for impact. Keep your health care provider up to date on your progress and, if symptoms persist past six months postpartum, Meyrowitz recommends seeing a specialist—ideally a women’s health physical therapist familiar with runners. Once issues are under control, you can start zeroing back in on your running goals.

Don’t be surprised if something as simple as turning over in bed feels…different at first. Strengthening abdominal and core weakness takes time. Diastasis recti occurs when abdominal muscles stretch and separate (painlessly) at the midline. Not sure if you have it? Lie on your back with your knees up and feet flat on the floor. Place two fingers width-wise at your bellybutton and lift your head an inch or two off the floor. If you have separation, you’ll be able to insert a finger width (or more) into the gap. Healing it takes time and focus. “You have to actively restore it versus just waiting for it to go back together,” says Bowman.

Whatever your situation, reintroduce yourself to your core slowly, with progressive exercises that target the transverse abdominis (your deepest abdominal muscle, which acts like a corset) and a gradual build. And treat your comeback like you would one from any other injury. “We often fail in educating females that giving birth can be traumatic on our bodies and requires repair and retraining just as other more recognized injuries,” says Meyrowitz.

Levels of a hormone called relaxin increase during pregnancy to soften pelvic ligaments in preparation for birth. But relaxin loosens ligaments elsewhere in the body, too—ankles, knees, wrists—and can stick around for several months after your baby arrives, particularly if you breastfeed. To help sidestep, say, a rolled ankle or a tweaked knee, Meyrowitz encourages her patients to ramp up their workouts slowly.

The joint laxity mentioned above, coupled with extra body weight, can cause changes in feet, which occasionally don’t return to their pre-pregnancy size or shape. A re-assessment of shoe size and type may be in order. “That minimalist shoe you rocked pre-pregnancy may not be as comfortable as a stability shoe now is,” says Milton. “If you feel your feet, knees or hips are more sore during or after runs, it may be worth finding a run clinic in your area to get your running gait analyzed for pronation and motion control.”

Boobs tend to grow during pregnancy and breastfeeding adds fuel to the fire. Yes, you can breastfeed and train (even race!) simultaneously, it just takes some coordination and pre-planning (for instance, feeding your baby or pumping before a run, to avoid feeling uncomfortably full). Those first few runs with your hard-at-work chest might feel strange—particularly if you’re normally on the smaller end of the cup-size continuum. Make sure your sports bras fit comfortably (supportive, not constrictive) and look for breastfeeding-friendly styles that allow you to feed your baby or pump easily, thanks to cups that unfasten and fold down for easier access.

Shifts In Athletic Goals And Priorities

“Realistic goals are always important to make running a success,” says Meyrowitz. So keep things in perspective. If running a 5K four months after having your kid seems aggressive, push it back. You might feel ready to train and tackle new goals right away, or you might want to spend more time cuddling with your baby and less time on the treadmill or roads. Either way, be kind to yourself. And remember that everything will come back exactly how it should—on your own timeline.