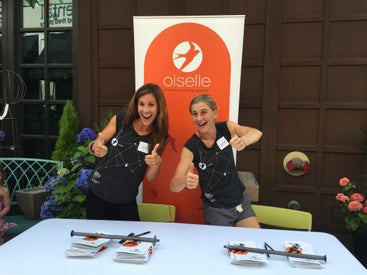 Time and time again, female athletes are showing the world that their bodies are strong and resilient. Olympian (and Women’s Running cover runner) Alysia Montaño raced at the national outdoor track and field championships while eight months pregnant. Companies are making activewear for pregnant bodies. Runners are recognizing the link between experiences you get from both running and motherhood.

So why are companies still taking issue with their pros and their post-baby bodies? When ProPublica and the BBC reported on the allegations against Alberto Salazar and the Nike Oregon Project, a big piece stood out to women runners:

“Five months after she gave birth to Colt in 2010, Salazar was unhappy about [Kara] Goucher’s weight, she says. Salazar had previously recommended that several female runners he deemed overweight take over-the-counter supplements marketed as fat-burners. But for Goucher, he had something different in mind.”

For an athlete of Kara’s caliber—who just had a baby five months before—to be approached about losing baby weight so quickly? Mayo Clinic reports: “It might take six months or even longer to return to your pre-pregnancy weight, whether you’re breastfeeding or not. Even then, your weight might be distributed differently from how it was before pregnancy.” Obviously for athletes this will look a bit different, as their exercise and nutrition is much more structured than a ‘normal’ woman’s, but athletes have a lot to say about the issue. One of those being world champion Lauren Fleshman (and Goucher’s teammate at Oiselle).

What was her experience after having son Jude? “When your body is your job, and you just spent 9 months donating your body to science unable to do your job, yes, there is an imperative to lose weight so you can get back to doing what you love,” shares Fleshman. “I didn’t feel sponsor pressure, or societal pressure. I never had anyone in my ear about it. I just wanted to get back to work, and getting into a reasonable body composition range was part of that.”

Some sponsors, such as Oiselle, are not only realistic about pregnancy, but also supportive of their athletes having families. She continues: “My sponsor, Oiselle, takes a much different approach than Nike for example. Oiselle doesn’t treat pregnancy as an injury or an indication of your lack of professionalism, and I didn’t have to worry about losing my job or being suspended if I wasn’t on the podium within a few months. They had a realistic view of pregnancy and recovery, and we had an open dialogue about how to make the time meaningful for both sides.”

Though Fleshman admits that combining pregnancy and running can take an athlete out of their comfort zone, she notes that pregnancy is not a disability or a free ride. “Women are athletes. Women have babies. The peak timeline for these two things happen to overlap, so it’s going to keep happening—those pesky babies!” jokes Fleshman. “When pregnant, you may not be able to do your most favorite part of your job, which is compete on a high level, but there are plenty of other ways to contribute meaningfully. An athlete can’t do that if the company isn’t open to it.”