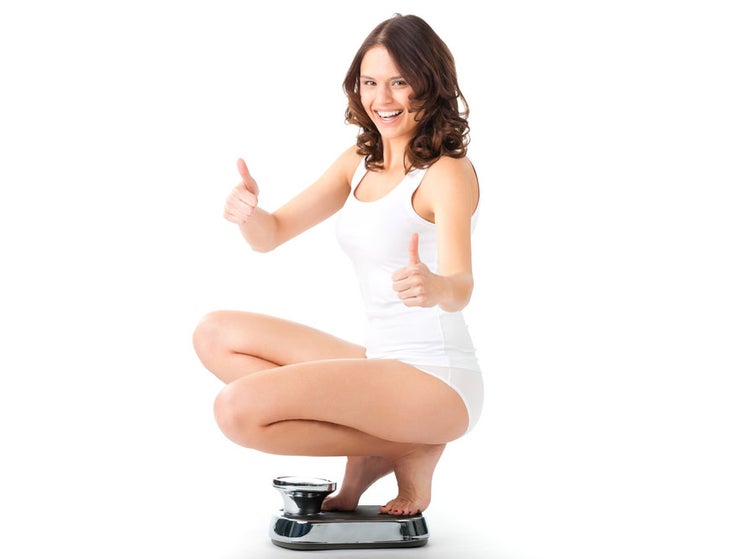 This year, keep your resolution to eat healthy and lose weight with this practical guide.

It’s that time of year again. Thanks to the holiday spirit, you’ve stocked up on the latest cold-weather gear and a new pair of shoes. You’re also motivated by a new set of New Year’s resolutions, and if you’re like most women, health goals top the list. For many runners, however, January’s resolution to “eat healthy and lose weight” is a mere delusion by February.

That’s because losing weight and keeping it off depends heavily on two things: First, it requires a real change in mindset. This means saying no (once and for all) to enticing shortcuts, like fad diets or skipping meals. For long-term goals, such as permanent weight loss, what works is taking small, but purposeful, daily steps. Over time, it’s the cumulative effect of these small steps that produce the desired outcome.

Linda Martello, an executive assistant in a busy metropolitan legal department, is living proof. It took Martello, 36, who just finished her fifth marathon, two years to lose more than 100 pounds and drop eight dress sizes. “I still always leave something on my plate just to remind myself that I’m in control,” says Martello, who runs as a way to relax and stay connected with friends.

This year, whether you have a small amount of weight to lose or a lot, embrace a fresh approach. Instead of picking a weight goal and focusing on the scale, make a few small but measurable changes in your eating behaviors. Practice these behaviors daily and have faith that small steps really do add up and make a big difference in the long run.

The science behind losing weight hasn’t changed, and plenty of information exists about what people need to do: Consume more fiber-rich fruits, vegetables and whole grains, downsize portions to trim calories, and avoid mindless eating due to boredom or stress. Of course, “knowing what to do” isn’t the same as doing it. When it comes to losing weight, it’s vital not to tackle too much at once. Establishing new eating habits takes considerable time and energy—just like training for an important race can entail months of preparation. It may take you a few weeks to several months before you feel you have successfully changed an old habit into a new pattern.

The following three areas focus on how to lose weight yet still consume enough fuel to run regularly and train for races. The key is to commit to at least one measurable (at the end of the day you can tell whether you’ve done it or not), action-oriented step within each area and practice it daily.

1. Arrange your world so you eat less

Set yourself up for success at trimming calories by eating more reasonable-sized portions. Martello swears by  switching to smaller plates, as slimmed-down portions still look generous. She also uses measuring aids while cooking to portion out her favorite foods, like potatoes and pasta, so she won’t end up with a hefty amount of leftovers—a significant factor for those cooking for just one or two.

Jennifer Parks, 48, a self-employed businesswoman, has enjoyed walking and running outdoors for more than 20 years. She also lost weight successfully without resorting to dieting or giving up any of her favorite foods. Parks weight crept up 75 pounds in the two years following the death of her mother. One of the biggest “small changes” she credits was to create a pleasurable eating environment.

I made eating dinner special every night—even if it was just me—with a pretty placemat at the dinner table, or I ate outside on the balcony,” Parks says.

This helped Parks eat more slowly, which enabled her to tune in earlier to her body’s fullness signals. “Getting out of the kitchen, where you tend to stand and eat out of containers, really helped me realize that I didn’t need to eat nearly as much to feel satisfied,” she says.

Other small steps worth practicing: Portion foods in the kitchen instead of bringing food-laden bowls and platters to the table; create your own single-serving packages of snack foods by pre-bagging items; and eat meals without distractions, such as watching TV or checking e-mail.

2. Eat planned meals and snacks that are satisfying

Nothing undermines a weight-loss plan faster than erratic eating habits. Undereating during the day slows the  body’s metabolism and sets the stage to back-load excess calories at night—a perfect recipe for weight gain. It also makes it that much harder to get out the door for a run. Instead, eat every three to four hours, which equates to three meals and two snacks or mini-meals daily. In other words, choose to eat breakfast, make time for lunch, and sit down for dinner. Start small, if necessary. Habitual breakfast skippers, for example, can begin by having a glass of low-fat milk or a piece of fruit as they work toward eating a daily balanced breakfast composed of at least three food groups.

Patti Finke, 66, exercise physiologist and founder of the Portland Marathon Training Clinic, agrees. “Women runners in their 50s especially have unique weight control and body image problems that come with the change in hormones. I see them eating way too little and exercising way too much and not coping with the normal changes that occur,” Finke says. She struggled herself until she began eating breakfast and scheduled snacks throughout the day.

I carried 15 extra pounds for almost eight years while running more than 80 miles a week and using every weight-loss trick I know. It came off when I accepted it, didn’t fight it anymore and made a conscious effort to eat a complete breakfast,” she says.

Don’t eat enough vegetables? Do what Martello did. “Every week I made a shopping list and the first three things on the list, and into my cart, were vegetables,” she says.

Get home too tired or too late some days to cook? Switch it up—have your main meal at lunchtime and keep ingredients on hand to assemble a quick and easy supper. Get bogged down by obsessing over exactly what to eat? Keep it simple.
At lunch and dinner, mentally divide your plate into sections and fill as follows: one-half with vegetables (and/or fruit when veggies are limited or lacking), one-quarter with meat, beans or another protein-rich food, and one-quarter with complex carbohydrates, like bread, rice or pasta, or a starchy vegetable like potatoes, corn or winter squash.

3. Don’t deprive yourself. Build in your favorite foods

It’s not only being under-fueled or physically deprived—think intense cravings and uncontrollable hunger—that sabotage our best intentions to eat sensibly. Psychological deprivation plays a huge role, too. Restrained eating, such as limiting yourself to a handful of “safe” nonfat foods or attempting to avoid “bad “ foods, only reinforces uninhibited eating. Once you slip up or break a self-prescribed dietary rule, all bets are off, setting the stage for binge eating and feeling guilty.

Both Martello and Parks stress the importance of giving yourself outright permission to enjoy your favorite foods. Martello, who refers to the scale as a “ball and chain” she’s left behind, had to relearn to trust herself around the foods she loves. From the start of her weight-loss journey, Martello, a self-described ice cream maven, built in a weekly ice cream treat. “I’ve learned not to cheat myself and to get what I want,” she says. After all, if your running routine was too boring or unpleasant, you wouldn’t stick with it. The same goes for your daily food choices. “Losing weight became easy when I finally stopped counting calories and fat grams and started being kind to myself,” says Parks, who lost 75 pounds in less than a year.

Other small steps worth practicing: Create rich food experiences by dining with others more often, trying one new food item a week or recipe a month, ordering different meals at restaurants and sharing must-have favorites with a companion.