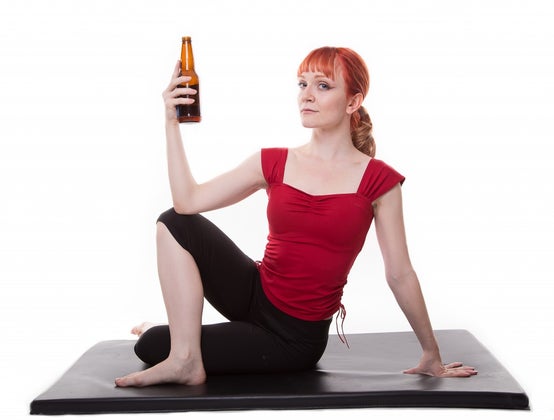 It can be impossible during hard times to turn off your brain and keep quiet.

You know that feeling? When you have a hard day and you just can’t stop thinking about it. Especially when you go to a yoga class and the instructor continuously keeps telling you to let your thoughts go. If you’re like me, sometimes those thoughts just grow larger and larger in my head and my yoga practice just turns out to be a waste of an hour.

Well, good news! Now you can find your inner peace without being peacefully quiet. Go ahead and yell what’s on the top of your head, laugh out loud, drink a beer—heck, go ahead and swear. Rage Yoga is just like regular yoga, but with a different attitude.

Lindsay Istace, founder of Rage Yoga, had just gone through a breakup when this idea popped into her head. “I was going through a lot of pain at that time and it started to come out during my practice,” she shares. “Suddenly there was a lot more yelling, swearing and emotional release on my mat.”

As a result, it helped Istace deal with her emotions and get onto her feet. With a little Facebook joke, Rage Yoga turned into a big success. Now you can practice it at home or in workshops.

Just like in conventional yoga classes, we work on our mind-body connection, practice breath control and move through sequences of various yoga poses. The difference is that we encourage a lot of swearing, laughing and silliness to a soundtrack of heavier music. The goal is to create a different atmosphere to encourage those who might not otherwise practice to give it a shot, and to create a safe space to unload negative emotions in a positive and constrictive way.

WR: After your at-home practice, how did Rage Yoga develop?

I joked about my ‘rage practice’ over Facebook and someone said they could picture me teaching ‘Rage Yoga.’ I thought it sounded like a hilarious workshop! Well, the workshop was a success and it got booked for another event. After doing both workshops, I saw that it wasn’t just a joke anymore. A lot of people connected with it. I eventually decided to make it a regular practice here in Alberta and it kind of just took off from there!

WR: What was your reaction when people started to catch on to Rage Yoga?

I knew it was going to do well in Calgary. The interest was strong as soon as I started to talk about it! I figured it would be easy to just have a couple of weekday classes and build a colorful community of alternative yoga badasses. What I didn’t expect was the global attention it has gained through the media! I have people writing me from places like Brazil, Iceland, Russia, New Zealand and more—and a lot of support throughout Canada and the U.S.—I wasn’t prepared for it! I’ll admit that it has been a bit overwhelming, but it has inspired me to do more with Rage Yoga.

At the moment, we only have classes available in Calgary, AB. We are, however, also planning to take our classes on the road! And for those who might want to practice at home, or who can’t make it to the live classes, we will be launching online classes in the summer.

Read More:
These Are The Best Yoga Poses For Runners
Yoga Gear That Every Runner Can Use

This Is How Much Sleep You Should Be Getting As You Grow Older, According to New Research