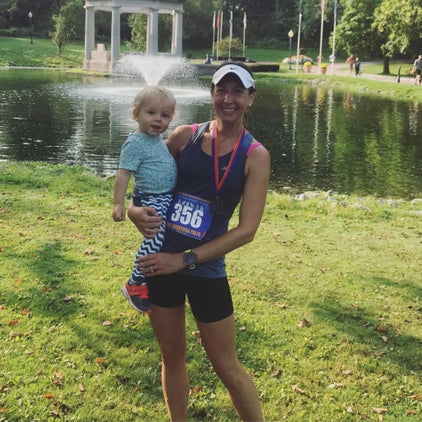 Finding Time To Run As A New Mom

I gave birth to my first child a little over a year ago. Though I knew things would change after becoming a mom, the transition was still a shock to my system. By the time I was six or seven months postpartum, I started feeling like I was getting back to normal physically, but the mental shift has taken a bit longer to process. I’ve had to accept that, at least for now, the needs of my little human are more pressing than my training plan.

Like many parents, my biggest challenge has been managing priorities–and figuring out where running fits in. I used to love logging miles at sunrise, preferably with friends. But since my child is an admittedly mediocre sleeper, sometimes my body begs for an extra hour of rest when the alarm goes off at 5 a.m. More likely, my energetic toddler is ready to start his day and my run gets delayed as I change diapers, make breakfast and brew an extra strong cup of coffee.

I have a flexible work schedule, so I’m often able to take the running stroller out during my lunch break or hop on the treadmill at nap time. For someone who used to plan out miles and workouts meticulously, not knowing when (or if) I’ll run has taken some getting used to. Even though training is sometimes (okay, often!) a struggle, my running feels better than it has in a long time. A few weeks ago, I raced a 5K and my finish time of 20:31.00 was my fastest in seven years. To be fair, I still haven’t set any new PRs. Many of my best times are from my days as a D3 college runner or my early 20s, when family obligations were few and I had a lot of time to put in the miles. Yet, over the past few months, I’ve run some of my fastest races in years. Logically, it doesn’t make a ton of sense. I’m often sleep deprived and I have less time to run than ever before; shouldn’t my race times reflect that? I’ve done some thinking and I have some theories about why my running has been on the upswing. 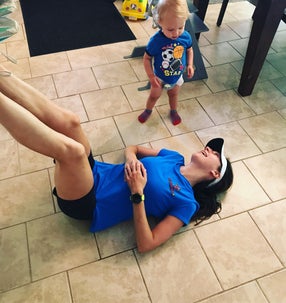 I’m more efficient with my time and my mileage. Before I had my son, I was able to devote plenty of time to my training. Track workouts, long weekend runs, post-race brunches, I could say yes to it all.  These days, I have to be a little choosier. If I only have an hour of childcare (or naptime), I need to make those minutes count. I don’t always have time for the “extras” like cool-down miles with friends or a long shower, but I can usually fit in the most essential parts of my training plan. My mileage rarely goes according to plan, but now more than ever, I’m embracing the idea that something is better than nothing. Postpartum running is a constant exercise in making time for what matters most and forgetting about the rest.

I’m physically stronger, too. I was lucky–I had a fairly easy pregnancy and typical delivery, allowing me to run up until the day before I went into labor. Even though my pregnant miles weren’t fast or many, plugging along while carrying 25 extra pounds really built strength in my lower body. These days, I don’t have much time for kettle bells or push-ups, but lifting, holding and wrangling an increasingly heavy little person has led to quite a bit of core and arm definition. I think this little bit of increased strength helps at the end of races when my muscles are fatigued and I feel like calling it quits.

I’ve learned to roll with the punches. I’d be lying if I said I no longer worry about my pre-race routine, but I’ve become more flexible. In the past, I was pretty diligent about eating a nutritious dinner and getting 8 solid hours of shut-eye the night before a big race. These days, I know that things don’t have to be perfect to still have a good outcome. The night before a recent half marathon, my family planned on an early dinner at an Italian restaurant. I studied the menu and picked out the ideal pre-race pasta dish. But life intervened and a cranky baby meant we were stuck in our hotel room with greasy take-out instead (fried chicken…the dinner of champions?). Since we were away from our home and usual routine, that night was also a struggle in the sleep department. My husband, 9-month old and I were all sharing a small hotel room, which meant no one got much shut-eye. I spent half of the night nursing, shushing and bouncing my out-of-sorts kiddo. When my alarm went off at 5:30 a.m., the thought of racing 13.1 miles seemed impossible. But as moms do, I poured an extra cup of coffee and hoped the caffeine would work its magic. It wasn’t an ideal scenario, but I’ve found that it’s more effective to focus on the things I can control versus the things I can’t. Sure, I was tired–but I could still eat my tried and true pre-race breakfast, get to the starting line with plenty of time to use the bathroom and listen to my pump-up playlist. Those things allowed me to begin the race in a positive mindset and ultimately run well.

I appreciate the miles more than ever. In the past, speed workouts and long runs felt like something I had to do. Often times, I would sit around procrastinating and dreading the hard work ahead of me. I’m not going to say that training is now magically all fun and games; sometimes I still psyche myself out before tough runs. But I now see each workout or race as an opportunity to block out the to-do lists and parental worries and focus on the task at hand. As much as I love my family, training hard and racing fast remind me that before I was a mom or a wife, I was a runner. And I still am.

What It’s Really Like To Return To Running Postpartum

4 Tips That Both New Moms And New Runners Will Appreciate