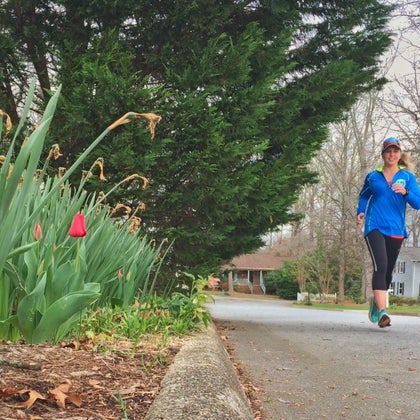 There was a point in my life when, if you had asked to run with you and asked how far I wanted to go, I would have said, “As far as you want”—and I would have meant it. Back in 2012 and 2013, running was my lifeblood and I was running marathons about every other weekend—22 marathons over 365 days. Although I never ran fast, my endurance at my 10-minute pace was extensive, and it seemed like there was nothing I couldn’t do. Then, everything changed.

Almost three years ago, I had surgery on my back that changed my running life forever. After struggling with chronic back pain for more than 12 years, I finally reached the point where the pain was debilitating and surgery was the only option left. I had run 44 marathons prior to surgery; since then, I’ve run six. After finishing my 50th marathon in November 2015, I swore I’d never run another. Marathons had become more painful—both mentally and physically—than they were fun. Since I’m not a competitive athlete, the reason I run is for fun, so it didn’t seem to make sense to continue doing marathons anymore if I wasn’t achieving that goal. And yet, here I am, signed up to run the Prague Marathon this May. What gives?

In short, the 18 months off between marathons has helped me “reset” my running brain. While I was certainly in physical pain during the marathons after my surgery, the mental anguish was equally bad. I found myself constantly comparing my current running abilities to my former running abilities and feeling depressed. Running no longer felt easy or carefree, and I got extremely down on myself. That led to a decrease in a desire to run, and the cycle repeated itself. The less I ran, the harder it felt. The harder it felt, the more upset I became. The more upset I became, the less I wanted to run.

Here’s how I changed that:

I took a full year off from the distance before the thought of running another marathon even entered my mind. By the time I started thinking about it again, it almost felt like my “marathon past” had happened to someone else. I couldn’t even remember what a really long run used to feel like!

Charting progress without obsessing over it.

For me personally, I found it helpful to run with a Garmin watch, but never look at it until after the run was over. This way, I could watch the improvement in my distances and paces without obsessing over them and becoming panicked while running. Some days, I don’t look at my watch until several hours after the run is over, just to let the sense of accomplishment sink in. By that point, the pace is almost irrelevant.

I find having a coach to be incredibly motivating. For me, it’s also smart. I follow my coach’s plan to the letter and don’t have to worry about whether I’m over- or under-training or whether I will be prepared come race day. We communicate via text after each workout, and the encouragement she provides is invaluable! I want to make her proud, and that helps hold me accountable. The consistency has helped me boost my confidence!

A few years ago, running 15 miles wouldn’t have been a big deal. Today, it’s huge! It’s a cause for celebration, and I don’t hesitate to cheer myself on via social media or a glass of wine. I could spend my time dwelling on how things used to be, or I can focus on how they are. I’m choosing to do the latter—and that’s making the process a whole lot more fun!

While I don’t know what will happen during the marathon this May, I do know that my mentality towards running has changed for the better. I’m a stronger, happier and healthier runner thanks to my break from marathons!