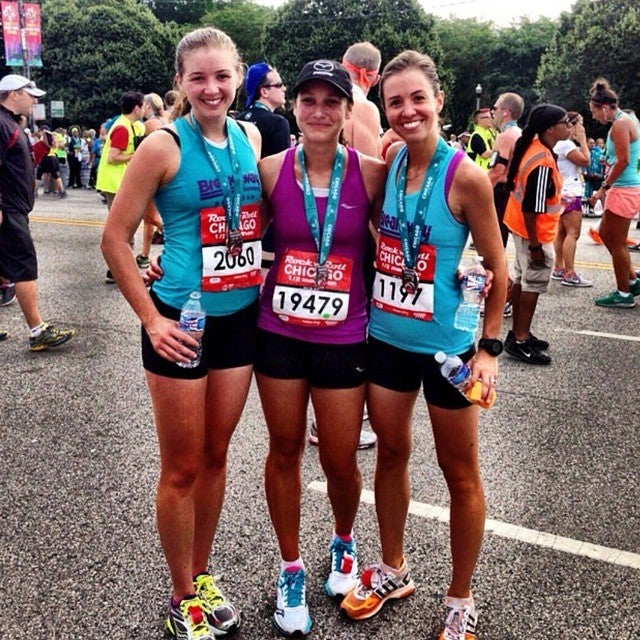 2014 was a hard year for me. There were some amazing highs, like speaking at not one but two Rock N Roll Marathon expos. But there were also some crazy lows, like separating from my husband for a couple of months. My running slowed down. I had to learn to adjust my expectations.

Only adjusting and accepting are two vastly different things.

I have always appreciated running, so much so that there hasn’t been one single time I have regretted it. There have been terrible runs, not so great runs, miserable runs, runs where I wanted to quit the sport all together, and runs where I literally felt like I was going to have to crawl back home at any moment. However they were all runs, and any run is better than none at all.

My second 13.1 of 2014 was the Rock N Roll Chicago Half Marathon. To say I didn’t want to race is putting it mildly. That is coming from someone that just told you they have never regretted a run.

My mind knew that I was not in peak shape, like I was in 2013. But in my heart, I am a competitor. Getting my legs on the same page as my mind for this race was not going to be a small feat.

The gun went off. Instead of taking it easy, I felt that competitive drive kick in. I tried to reason with myself that I could start fast, but after mile 5, it would be lucky if I could to get to the finish line. Anyone who has started out a race at a moronic-for-them pace knows slowing down in the later miles does nothing to ease the pain or make you feel any happier. You just want it to be over.

I was back to my run-loving self immediately after crossing the finish line, but during those 13.1 miles, I wasn’t sure if I ever wanted to run a race again. I was not accepting my slow down. My body was doing the adjusting, not me.

So how do you accept a slow down when you are someone who enjoys improvement?

Like most things I found the answer on a run…..

Remember where you came from.

My first race was in 2000. It was a 10K and my time was a 1:06:42, averaging just under 11 minute per mile. When I ran that race, a half marathon seemed like something I could never do, or even want to do. Now on any given day, I can run 13.1 miles. They may not be pretty, but I can cover the distance, even when I consider myself completely out of shape.

As someone who was new to this sport 14 years ago, I thought that the only way I could truly consider myself a dedicated runner was if I constantly trained to improve my times, with PR’s as the result. Now 14 years later, I’m smart enough to know that running faster times doesn’t make you any happier as a person. The time on the clock does not determine your level of dedication or love for the sport.

I think the pursuit of PR’s can be wonderful, but only if you are able to keep perspective during times that your running doesn’t go exactly as planned. At the end of the day, a run is a run. While sometimes people like to argue this point, that fact remains true. The person who finishes first still ran the same race as the person who finishes last.

I love running right now for very different reasons than I did back in 2013 and the years prior. I’m beyond thankful for all running has taught me and continues to teach me, because currently I wouldn’t be at the place I am at if I hadn’t experienced a slow down. I’m pretty happy with where I am at right now. I’m even more excited for the lessons I have yet to learn from a sport that I am not only dedicated to but love with all my heart.