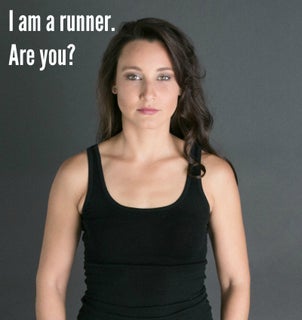 When I started running, I wanted to look like a runner.

If I looked like a runner, then in my head, I was a runner.

I bought printed shorts and a handheld water bottle. I invested in moisture wicking socks and a digital watch.

I’ve often thought about when I would become a runner or when others would look at me and think, “Hey, that girl is a runner.”

Sometimes I wonder if I could have given myself that title when I started routinely jogging around my neighborhood in high school, carrying a large Walkman as I moved. I know that when I worked at a local running specialty store in college, I considered myself a new runner, but still a runner nonetheless. When was that moment when I became part of the running tribe?

You can run and not be a runner. Hear me out…

I have friends who from time to time run. They have even run races, but they don’t call themselves a runner. In their eyes, they only occasionally run.

Could they consider themselves a runner now? Yes, but the distinction into this club is theirs to make.

I do know that I was probably what most would consider a runner long before I considered myself one. But that was a distinction for me to make.

I considered myself a marathoner the day I crossed the finish line of my first marathon. It didn’t matter that I had only ran 26.2 miles once. I had made the decision that I was a marathoner and not a girl who had run 26.2 miles.

Maybe this logic is flawed or maybe it’s not.

I believe we are what we want to be if we take the steps to be that or become that. The choice of the label “runner” is ours alone.