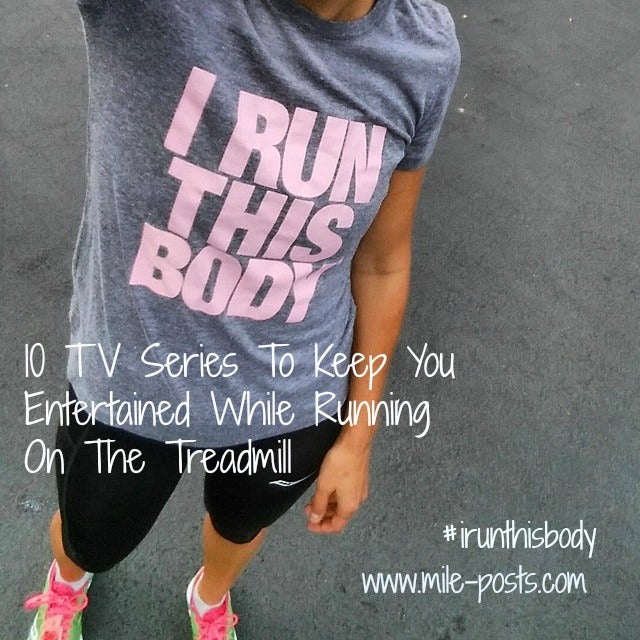 In the winter I do a lot of running on the treadmill. As a mother of three, whose husband leaves for work at o-dark-thirty, I don’t have any other option most days. I have learned to appreciate my treadmill for what it allows me to do when I otherwise couldn’t. I would venture to say that my Landice treadmill is one the best investments I’ve ever made in my health and well-being.

I NEED to watch something while I run on the hamster wheel.

Here are 10 TV Series that have kept me entertained during countless runs. These are all shows that kept me engaged enough that I wanted to keep running to see what happens during the next episode. Like my running shoes, I save these shows for when I run. When I wake up in the morning, I look forward to my treadmill run because I am excited for what I plan on watching.

Click on any show name for the full details.

Dexter: I credit this show to helping me to run 30 miles on a treadmill while training for a spring marathon one year.

Weeds: I still hum the theme song from this one. My husband could never get in to it. Maybe if I had watched it while not running, I might have felt the same, but it did the trick on the treadmill.

Orange Is The New Black: The acting in this show is amazing. Crime and comedy are my two treadmill must haves.

House of Cards: Streaming series are my favorite for treadmill runs because you can binge watch them. I also prefer when all episodes are already available or become available all at once. It’s painful waiting a week for a new episode when you have 20 miles to run.

The Wire: I liked this Baltimore based crime drama so much that I’ve been considering adding it to my list of shows to re-watch while running.

Homeland: I’ve enjoyed watching Claire Danes since My So Called Life and I like her just as much in this series. This is a political thriller. Growing up in Virginia in a family who was involved with politics has made me a sucker for this type of show.

Ray Donovan: You may be noticing a trend, crime drama keeps me running, literally.

The Killing: This crime drama is a bit slower than some of the others I have suggested but it still did the job, especially for runs under an hour.

Luther: How can you not like a crime drama that has Idris Elba in it (also see The Wire). I’m not a huge James Bond girl but you can bet I will head to the theaters if he gets picked to be the next one.

Shameless: This show and family is a train wreck, and who doesn’t like to watch a little drama from time to time.

I’m always on the hunt for new series. What are some of the ones you have enjoyed while running on the treadmill? Tweet @mileposts and @womensrunning.