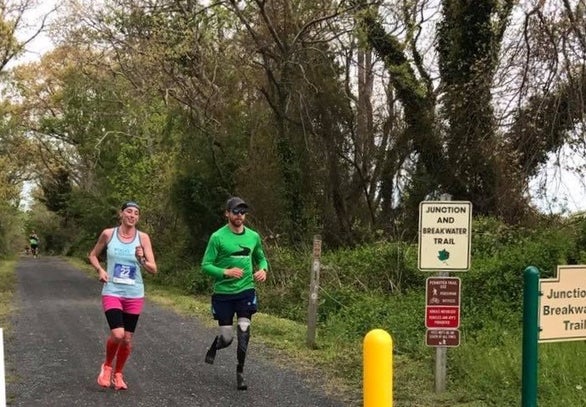 Never Underestimate The Power Of The Mind

Let’s back up to three weeks before the marathon. I ran the Scranton Half Marathon in preparation for the Coastal Delaware Marathon. My 3-minute PR time of 1:23:23 predicted a 2:54:04 marathon, according to the VDOT 02 app. Two weeks before the marathon, I ran a 5K PR of 18:09.00. I knew that, at 35 years old, I was in the best shape of my life. I was scared, but I had faith that I could go under the three-hour barrier.

One week before the race, my right hamstring felt tight. I didn’t think much of it, until it continued to hurt for the next few days. I went to physical therapy and took almost the entire week off before the marathon.

Related: 3 Ways To Train And Stay Injury-Free Before A Race

Marathon day finally came. The weather was overcast and in the 50s. There was some wind, though not as much as originally predicted—but I knew it would be tough on the coast. The day was near perfect for a marathon. My friend Huan, his friend Chad and I started out together. The plan was to run a 6:50 first mile and then maintain a pace between 6:43 and 6:49 for the rest of the race. We had a head wind for the first half of the race, so we took turns blocking the wind: two runners up front, one in back. We switched off every mile. By mile 3, we added two more to the pack.

By mile 5.5, we had a group of 10; I was the only female. From the start of the race, my legs felt heavy and my hamstring wasn’t great. I was not sure how long I would be able to stay with the group, but I was planning to stay with them as long as possible so I wouldn’t have to fight the wind alone and I could utilize the positive energy from the group to keep pushing forward.

Not long before the half, I started falling off. The group was pushing a pace I wasn’t comfortable keeping; I was still on goal pace, but they were faster. I was able to catch up around the half marathon mark, but wasn’t able to hold on for too much longer. We crossed through the half marathon at 1:28 and change.

After the half, this guy Dillon and I started falling off. We worked together as long as we could, but I couldn’t hold on. My 6:45 goal pace turned stale quickly.

I remember miles 18 and 19 so vividly. The course was absolutely breathtaking. It was a wide “rail-like” trail lined with trees to create perfect shade. It was here that I was hurting most. It was here that I gave myself permission to give up. One of the guys who fell off our pack earlier passed me at this point. He offered words of encouragement and tried to get me to come with him. Mentally, I wasn’t ready to try.

At some point during mile 19, we curved around a big open field. I remember looking at my watch and seeing that I was close to a 9-minute mile pace. I wasn’t happy, but I accepted it. Just to put this in perspective, I don’t even know the last time I ran at this pace during an easy run; this was not normal. Figuratively, I fell down during this 19th mile; but luckily, a new friend was there to pick me up.

I met Brian Reynolds at Montclair Bread Company’s Doughnut Run 5K the previous December. I honestly don’t remember if I officially met him, or if I just saw him there. We were Facebook friends and part of the same team and running community. Brian is a double amputee distance runner–one of the fastest. I had the pleasure of hearing his story the night before the marathon. He is truly an inspiration in the running community.

We had a big group of friends running Coastal Delaware, so Brian (along with a few others) came to support us and cheer us on. When I was in my 19th mile, Brian had just broke off from the cheering section to get a few miles of his own in. He happened upon me during this dreaded mile and saw my obvious struggle, so he jumped in and ran with me. He provided encouraging words and helped me to start bringing down my pace. My 8:38 19th mile quickly turned into a 7:24 20th mile, then a 7:03 21st mile. My pace fluctuated between mid- and low-seven-minute miles until the 25th mile. We started passing people. We caught up with a few people from my starting pack who’d also fallen off the pace. We tried to encourage them to come with us, but they had nothing left; they felt similar to how I felt when Brian found me. Brian pushed me to a 6:47 26th mile. I gave it everything during the last 0.2. This final kick was at a 6:09 pace, allowing me to finish in 3:05:05. During the final miles I was passed by one woman. After stalking her on Strava after the race, I saw she ran a huge negative split; she deserved to be in front of me. I placed third for females with my second fastest marathon time.

I learned a lot during this marathon. One lesson I learned is that it is great to have an ultimate goal, but you also need a secondary goal in case you fall off your initial goal. I know this may seem like a cop out, but if I had a secondary goal from the beginning, I may not have given up so easily. When Brian started running with me, I set a secondary goal to run a 3:05:00, which I achieved. It was not easy to get back on track, but I did it.

Another lesson I learned is the power of the human mind. I try to preach “mind over matter,” but I don’t always listen to myself. It is so easy for the human mind to give up and convince your body that you can’t go any faster; it took a friend (not myself) to convince me that I could keep going.

Lastly, I learned the power of human encouragement. I know I could have run the time I ran without the help of a friend, but I also know that I wouldn’t have. It’s funny how your mind and body respond to the positive energy of others.

I’ll leave you with this quote: “Even when you have gone as far as you can, and everything hurts, and you are staring at the specter of self-doubt, you can find a bit more strength deep inside you, if you look closely enough.” —Hal Higdon

How To Handle Injuries That Show Up Late In Training

How To Set Positive Race Goals And Ditch Negative Ones