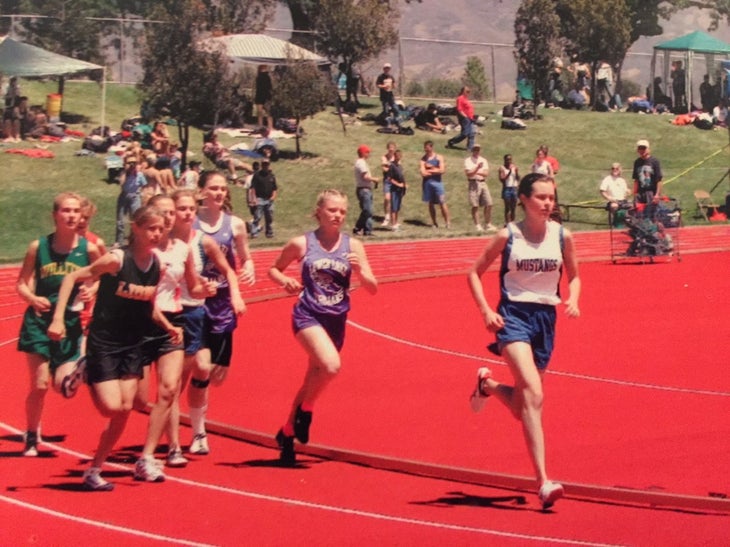 At this point in your life, you’ve moved to San Diego, leaving behind two years of high school and dreading starting over at a brand-new one. You’re pissed at your parents for making you leave in the middle of it, ditching your top spot on both the cross country and track teams and leaving your boyfriend. (Trust me, he wasn’t the one.) That top spot—that’s a hard one to let go of. I get it. I was you ten years ago. Going nearly undefeated during the regular XC season, making it through sectionals and placing 18th at the state meet will always be major highlights of your running career. You trained in Park City, Utah, with Ed Eyestone and Paul Pilkington, two legends you will appreciate more later as an adult. On the track, the kids used to move aside to give you the inside lane. Your pesky 800-meter rival got what was coming after she spiked you. Running life was good, and now you have to leave it all and start over at some huge D1 school where the girls are faster and you actually have some competition in front of you. Life was over as you knew it—but it’s a damn good thing you got some perspective through it all. You still ran on a top varsity spot until graduation; you still lettered seven out of eight times between XC and track; and you ran faster times against quicker fields in front of larger crowds before hanging up your spikes.

Ten years and 19 half marathons later, that period will seem a lifetime ago. Images of breaking tape and newspaper interviews will become distant memories, and what will be left are a handful of runner lessons you will wish you knew as you navigated the fast lanes of high school, life and, now, your first marathon. I didn’t have an older self to show me right from wrong when I was your age, so I’m here to throw a bit more perspective your way—even though you will prove to be smarter than I.

First, do not let your weight run your life (pun intended). There will be a point where you base caloric consumption on how many miles you clocked that day—the less miles, the less food. Maintaining that “runner body” that is so off from reality will consume you to the point of extreme mental and physical consequences, and it will take you years to recover. Celebrate your body and the good genes you were given, but do not compromise your health in the name of fitting into jeans you wore when you were deathly ill and incapable of absorbing nutrients. That’s not fair to you or anyone who loves you.

Second, appreciate healthy competition, but do not allow it to break you. You don’t always need to be the best, and it’s okay that you removed yourself from running circles to refocus priorities and relearn how to love the sport simply because it brings you joy. Training solo for your first marathon, you will learn, was the best decision you ever made for yourself. The lessons learned there—humility, honesty, patience, persistence, love—will translate to work and life. They will make you a better person.

Third, listen to your coaches, mainly your dad. Remember when he used to yell tidbits in your ear on the backstretch during the 1,600 meters? You hated it; you were tired of running for reasons you could not explain, other than maybe that you had a natural talent for it. Well, years later, after you’ve adopted your own special reasons for adoring the sport, you will get another opportunity to run this race. Dad will once again fly back and forth between the curves in the track, yelling strategies that place you right back in that Maverick uniform. Listen to him. He sees himself in you, and 10 years from now, you will see yourself in him. And there will never, ever be a greater coach than your father.

Finally, celebrate every run. You will spend almost an entire year surrendering to ulcerative colitis following your first term at UCSB, and you won’t run for nearly two as a result. When you’re healthy again, running will be different—never again a chore and forever a complicated, demanding and rewarding relationship. It will be good and bad, slow and fast, heartwarming and heartbreaking. You will be reckless with it, but somehow, it will be the most forgiving force in your life when everything else seems to fall apart. On the flip side, you will learn to be careful, patient, smart—and the outcome will surprise you. I don’t want to spoil the ending, but trust me, it will be amazing even when it isn’t.

It will take you several years after high school to figure out exactly why you crawl back into your shoes after injury and try to hide from your own thoughts during long runs, but that’s the beautiful thing about marathon training: It answers all those questions and yanks out dusty, unresolved emotions you thought you could ignore. There’s no hiding in running—and perhaps at 27 years old and on the cusp of my first 26.2-miler, that’s why I’m writing you this letter. My legs have been running for nearly 15 years, but my heart is just getting started. Don’t worry—you’ll learn the difference.

PS. That whole Pilk thing? It may have started on the track, but it will never fully go away.