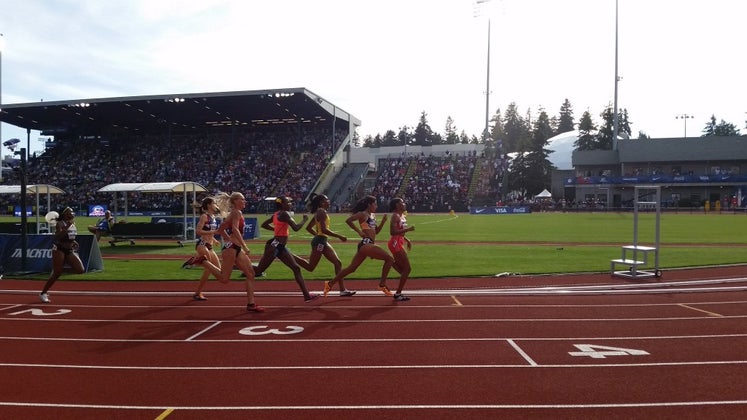 This past weekend, I had the honor of watching the Women’s 800-meter final at the U.S. Olympic Track Trials. It was a race to determine who will be on the U.S. Olympic Team heading to Rio this summer to compete.

A devastating late race crash caused two runners, Brenda Martinez and Alysia Montaño, both of whom were (Martinez still is) strong contenders for the team, to finish outside of the top 3. The energy in the stadium during all of the races was infectious and that same emotion ran high when the crash occurred. While I was very excited for Kate Grace to win, there was also a sense of sadness for the other ladies who saw their race fall apart.

Here are life lessons I took away from watching that race (and others).

Don’t write your story before it’s written. When I snapped a picture as the women running the 800-meter final headed in to the last turn, Kate Grace, the eventual winner, was in 6th place. It’s easy in a race and in life to get discouraged, even just a little, if you aren’t where you want to be. Kate wasn’t aware of what was about to unfold. What if she had let up ever so slightly and let her position in the pack get in to her head? Anything can happen in track and the same goes in life. Stay strong and don’t write your story before it happens.

A lot can happen in a small amount of time. Don’t get discouraged. Have you ever had those moments when where you wanted to be felt really far off? Where you felt discouraged? Maybe you felt like you took a wrong turn somewhere in life and now getting to the destination you dreamed of isn’t possible. Watching runners fly around the track at speeds I can only partially comprehend was a nice reminder that a lot can happen in a very short amount of time. You never know what is just around the bend in life. Ride out the lows and enjoy the highs.

The person with the most talent doesn’t always find the most success. Have you ever not started something or continued on with something because there are more than a few people who do what you do ten times better than you? It’s easy to get stuck in the comparison game and try to be better than someone else. It is even easier to give up when you feel you aren’t better or as good as that person. Focus on YOU. Focus on being YOUR best self and the rest will fall in to place. In sports the best team doesn’t always win, in races the fastest runner doesn’t always come out on top, but when you do your best and give your all, life works out in one way or another.

Handling the lemons life gives you with grace speaks volumes about who you are. Let’s pretend for a moment it was you who was in that 800-meter final. If you had gotten clipped or pushed by another runner and not made an Olympic team, how would you have reacted? How would you continue to feel? What words would you speak about the other runner involved? Brenda Martinez has been nothing but a class act in all of her interviews. She has moved forward with grace. It’s a reminder that dwelling on something doesn’t change the outcome but how you react to that outcome does in fact change you.

The finish line is another start line. Things don’t always work out the way you want them to. You can only control yourself. You can’t control how others feel, how others react, how others will run but you can control you. Alysia Montaño could have walked off the track after her fall, she finished, albeit in last place but she finished. By finishing that race she has now moved on to another start line. A start line she may not have visualized going in to this race, but a start line nonetheless. When things don’t go as planned or as you want them to go, it’s important to process and heal. It’s also important to pick yourself up and move forward. Refer back to lesson one; don’t write the story of the rest of your life before it is written.