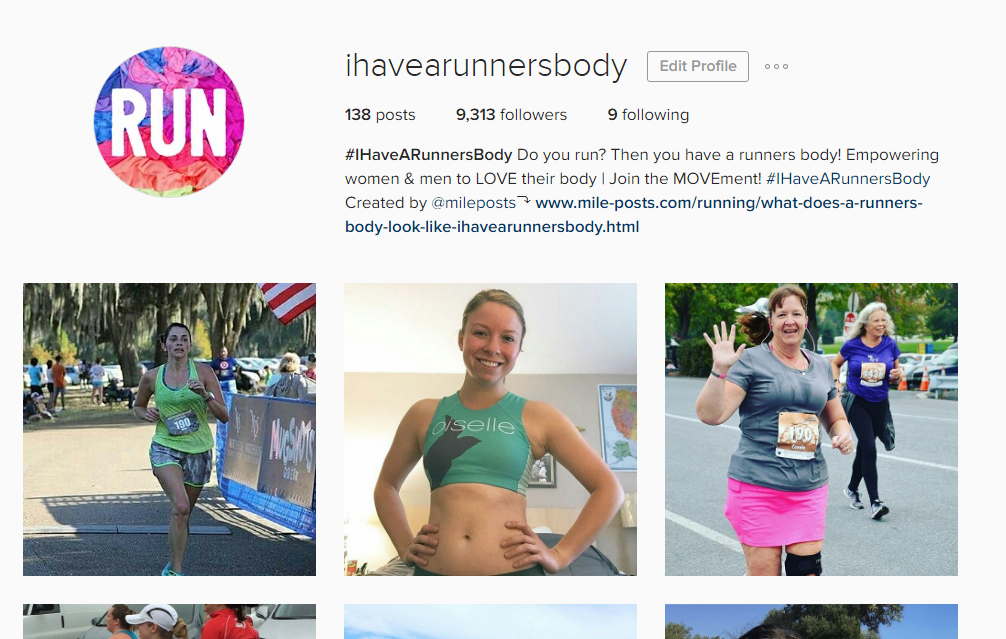 Fed-up with comments about my what my body looked like compared to what someone thought it should look like as a runner, the catalyst for the #IHaveARunnersBody MOVEment started earlier this year. I knew I wasn’t alone in my frustration of being judged as not looking like a runner and wanted to create a space where runners could share their stories.

The aim of the MOVEment is simple: to empower men and women to love their runner’s bodies by giving them a visual storyline on Instagram of what runners from around the world look like. Runners who are out there doing their thing day in day out—regardless of whether someone thinks they look like a runner or not!

Through the process of going through photos daily to decide which ones to post on the #IHaveARunnersBody Instagram account, I’ve learned a couple of things that I felt were worth sharing!

It’s easy to get stuck in our own head.

There are days when you think you look terrible and then someone compliments you and you think, are they looking at the same person I just saw in the mirror? It’s easy to get stuck in negative body thought patterns that are completely irrational. I’ve found that reading the stories attached to the photos brings the focus on what your body can do, not what you imagine it to look like.

When we share what makes us insecure it helps us grow.

When we put our insecurities out there I truly believe it helps us grow and get out of our own heads. I think I have large thighs, but putting that out there makes me realize, that the size of my thighs really doesn’t matter, and maybe they aren’t all that big after all. At the end of the day I look like me, and that’s who I am supposed to be. I think when we sit with our insecurities and say ok this is how I feel but it’s doesn’t change who I am, then we grow.

We are our own worst critic.

After my last marathon I posted a photo of myself with my family. I liked the photo not because of what I looked like but because of the emotions it captured. It was a happy moment and I wanted to share that. A woman commented on the photo and tagged a friend and said leg goals. If I could have reached through the computer and hugged that woman I would have. I’ve been self-conscious about the size of my legs for years! But you know what, these legs have carried me through 31 marathons. Anyone who looks at them and judges them harshly, can take a hike, myself included. Reading the comments on the photos I post and seeing other runners lift up those who are brave enough to post their insecurities is uplifting. As a writer, I often joke, NEVER READ THE COMMENTS, but this is one place where I read every single one of them. I hope that the comments on the photos lift up the original poster as well.

You are not alone.

There is this thing I used to do when I would overeat, I’d grab a pillow from the couch and sit with it on my lap. I realized I only did it after I overate and so it became something I focused on. Don’t over eat so much so that you need a pillow, I’d remind myself. I really truly thought I was the only person in the world who did this. Then I shared how I hated I did that and other women told me they did the same thing! Feeling alone in anything isn’t fun, whether it’s being alone in how you feel about your body, actions you take, or even just in the sense of having someone out there who cares about you. Posting these #IHaveARunnersBody photos shows other women that they aren’t alone, we all struggle in some way.

There will always be one negative nancy.

As a blogger and a writer I’ve often gotten my feelings hurt by comments left about me or about my work. These comments have stuck with me for far too long and affected me in ways that I’m embarrassed to even admit. Up until I started posting #IHaveARunnersBody photos I felt like there had to be some sort of semblance of truth to the comments even if they were completely off base. Seeing someone leave a lame comment on a positive photo has confirmed in my head those comments have nothing to do with me or the original poster of the photo and everything to do with the person leaving them. I don’t let negative comments take up space in my mind anymore.

Focus on the emotions in a photo.

I recently posted this incredible photo of a woman about to cross the finish line at the Chicago Marathon. On her photo she said she had debated posting the photo because she looked like a hot mess. Not only did I not see that she looked like a mess, I mean really she was at 26+ miles of a marathon, but the only thing I saw and that others saw was the emotions the photo contained. She could have looked like the Lock Ness monster and no one would have seen it. Don’t let a photo steal your joy because you are focusing on something silly that you don’t like about your body. That one photo was the most liked photo on my Instagram EVER. Which is ironic since it’s not even my photo, which leads me to the next thing I’ve learned. I’ve been fortunate to be able to create a space on Instagram has a following. When I started blogging and using Instagram it felt like all I was doing was self promoting every day and that gets old fast. It’s been amazing to take some of the focus off of what I’m doing and instead use it as a space to highlight what other people in the running space are doing.  I think when we all work together we can make big things happen and force change. One person is like a tiny pebble but a group is like a boulder. We are much stronger together than as one. I hope in 10 years from now we aren’t even having this conversation about what a runner looks like, that the judging becomes a thing of the past.

You can look at inspiring photos all day long of people loving their bodies and telling you to love yours but that’s not going to make a bit of difference if you don’t address where your insecurities come from and decide that you want to live a life that’s more than about what you look like. Loving your body is an inside job. It’s nice to have people tell you that what you did was fantastic or that you look great, but those words are meaningless if you don’t believe them at your core.