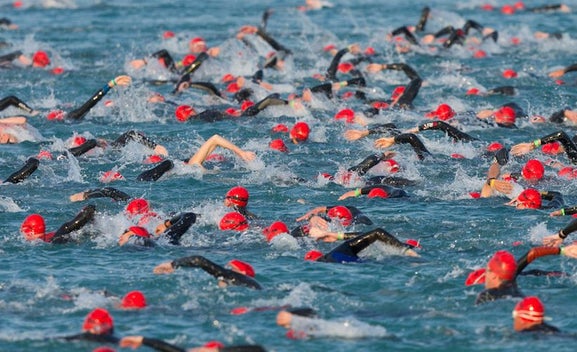 I can still vividly recall when I decided that I would someday become an Ironman. It was a warm and slightly overcast Sunday afternoon in November 2011. As I embarked on my normal running route along Tempe Town Lake in Tempe, Ariz., I was initially annoyed and frustrated; the path was packed with runners and spectators. At first, I assumed that it was a community 5K; however, upon further investigation I discovered that I’d stumbled upon the final leg of the Arizona Ironman. I watched, entirely captivated, as these athletes, who had already swum 2.4 miles and biked 112 miles, flew past me! I guess I let myself get a little too close to the race, because spectators began cheering me on, offering words of encouragement that I did not deserve. In that moment, it was decided: someday, I too would become an Ironman. Almost five years (to the date!) later, I crossed the finish line of the Louisville Ironman. Here are some things I learned that helped me reach my goal and become an Ironman.

Related: She Had Stage 4 Cancer, Then She Did An Ironman

I decided very early on that it was important to keep myself grounded in my long-term goals. I knew that I just wanted to finish the Ironman (and hopefully do so in under 15 hours!). Having a clear idea of my goal for the race influenced everything leading up to race day, including how I structured my training, how I chose my gear and how I mentally approached such a daunting endeavor.

I knew that there would be times during my training and on race day that would be wonderful and times that would absolutely stink. With that knowledge, I decided that I had to savor the good times (since I knew they might not last) and push through those tough moments.

A few months into Ironman training, I quickly learned that triathlon is an EXPENSIVE hobby. I entered the world of triathlon with a runner’s mindset (“All I need is my running shoes and the open road!”). I was floored when I discovered ALL OF THE THINGS that are needed for triathlon. I relied on other triathletes to help me decipher what was and wasn’t necessary to be successful in my first Ironman.

Despite successfully winging it for my Half Ironman, I knew that advancing to a full required a solid plan. I leveraged others who had already completed Ironman races for advice on all components of race preparation: nutrition, transitions, sighting, wetsuits and riding in aero. There were so many things to learn! I read books, watched YouTube videos and absolutely immersed myself in everything Ironman.

At the beginning of my training cycle, I identified my greatest weakness: biking. Instead of focusing on my strengths, I chose to embrace my weakness. I acknowledged that I might never be the strongest biker, but I committed to become the best that I could. To help me improve, I sought out training groups, group rides and century and multi-day rides.

I was strategic for the timing I chose to complete my Ironman. I learned from my Half Ironman (which was less than a month before my wedding!), that I wanted to complete my full Ironman during a time when my work and family responsibilities were minimal (i.e. no more simultaneous wedding planning and Ironman training for me!).

Training for an Ironman is such a time-consuming endeavor. Most weeks, I dedicated at least 15 hours to training, not including the time I spent doing stretching and strengthening exercises (almost) every night. With so much of my free time dedicated to Ironman training, I refused not to enjoy it. Any time I could, I incorporated other people into my workouts. I joined a local running group for speed workouts and tempo runs. I completed all of my long bike rides with friends or organized groups. I did all of my open water swims with friends. As a result, I looked forward to each workout and actually enjoyed the time I spent Ironman training.

I completed two workouts (almost) every day, so it was sometimes difficult to adequately recover after each one. There were several times during my training when I was completely run down and worn out. Instead of resting, I stubbornly chose to push through to the next scheduled workout. On one such occasion, after slipping on wet leaves, my long bike ride ended in a complete wipeout. This unfortunate accident, which occurred less than a month before race day, was a wake-up call. It forced me to rest and recover, since I was physically unable to ride my bike or run for almost two weeks.

Following my bike wipeout, it was tempting to doubt myself. Not being able to follow my training plan for two weeks, I started to question my ability to complete an Ironman. I squashed those negative thoughts by focusing on the six months of solid training that I had already completed. I knew that two weeks of rest would not undo all that I’d already done to prepare.

I have never been more nervous than I was in the days leading up to my Ironman. I had dedicated seven months to preparing for race day, and I desperately wanted everything to go according to plan. Although (almost) nothing went as planned, my Ironman experience was phenomenal. I started strong, crushing my goal for the swim in just over an hour and 15 minutes. The bike leg was incredibly challenging, and not because I was physically unprepared. Instead, I experienced countless tech issues: my chain dropped multiple times, my handle bars practically fell off and my aero water bottle system malfunctioned. It is an understatement to say that, after eight hours on my bike, I was ecstatic to begin the run. In fact, as I frantically tied my shoes in the bike to run transition, a volunteer remarked that she’d never seen someone so excited to run a marathon. And boy, was I excited! The first 13 miles of the marathon flew by. I saw my husband, my parents, and other family members who live in Louisville, all along the course. It felt great to be in my element, and I was confident that I’d finish in under four hours. However, right around mile 20, my plans were derailed. My body decided it had endured enough and my knees completely gave out. I was forced to do a slow trot/shuffle to the finish line, where I proudly crossed in 14 hours and 39 minutes. I had accomplished the goal I’d set for myself five years earlier: I was officially an IRONMAN.

Real Runners: She’s Doing An Ironman For Her Mother