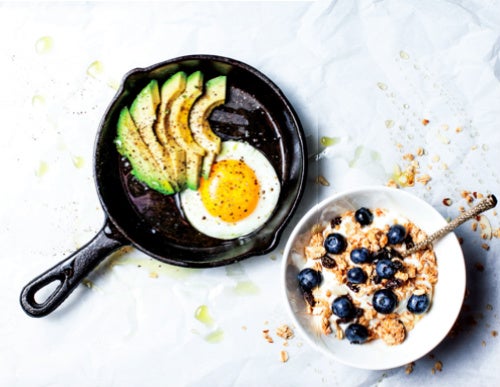 When you think of runner foods, what comes to mind? Images of carb-heavy bagels, bananas and pasta likely dance in your head. There’s even a specific expression for how to eat before a long-distance race. (Hint: carbo-loading.)

However, there are a growing number of nutritionists and athletes who believe that it’s time for this doughy script to be flipped. These experts say following a ketogenic diet, which restricts carbs in favor of high-fat and protein-rich foods, is the right way to fuel a new personal best. How do you know whether to hit the bialys or the bacon? We explore both sides to help you decide which eating plan might be right for you.

Experts who believe in reducing carbs argue that high-carb diets lead to weight gain and hinder a runner’s performance. On the other side, those who stand behind higher carbohydrate consumption say that decreasing carbs can actually hinder training.

Sports nutritionist, author and coach Matt Fitzgerald recommends looking at the world’s best runners. While some sports nutrition authorities believe that no athlete should get more than 40 to 50 percent of calories from carbs, Fitzgerald argues that if this were correct, then why are the East African runners (who eat much more than this) the fastest marathoners?

In his popular book Racing Weight, an analysis was conducted on 10 world-class Ethiopian runners. On average, they consumed nearly 10 grams of carbs per kilogram of body weight daily, or about 2.5 times the amount of carbs that the typical American athlete ate. Fitzgerald sums it up: “These athletes hold the most records, they win the big races, and they eat a lot of carbohydrates.”

RELATED: Don’t Run On Empty Because Of A Low-Carb Diet

Fitzgerald has also observed firsthand the negative effects of switching to a very low-carb diet: “There’s a good body of research showing when carb intake is low, athletes don’t perform as well in endurance events. And when carbs are consumed, I find any amount of training is less stressful on the body, and the body can positively adapt to training at a higher level.”

Not that he is suggesting endurance athletes should go overboard. Fitzgerald recommends a “carb-centered diet,” where carbohydrate-rich whole foods are included in all meals and most snacks. He argues that, in general, a higher-carb diet increases training capacity and enhances performance—effects that in turn also improve body composition.

A day in the life of a carb-centered eater might include whole-grain granola with fresh berries and plain yogurt for breakfast, a turkey and veggie sandwich on whole grain bread with a piece of fruit for lunch, and broiled fish with quinoa and steamed vegetables for dinner. “As you see, this looks pretty normal, and that’s because virtually all traditional cultural cuisines throughout the world are carb-centered. But it works, so why change it?” says Fitzgerald.

On the other hand, Dr. Phil Maffetone believes the answer isn’t so simple. He is a pioneer in the field of biofeedback and has worked with many professional athletes, including six-time Hawaii Ironman triathlon champion Mark Allen, the late marathon legend Grete Waitz and ultra-marathoner Stu Mittleman. He has also helped thousands of weekend warriors achieve personal-best performances.

His system taps into the human body’s unique fat-burning system, which hinges on the belief that everyone is different when it comes to eating and exercise. “What’s important is that we follow the needs of our body,” he says.

A high-fat and low-carbohydrate day’s menu may include a breakfast of eggs fried in oil with sliced avocado, lunch of salmon cooked in butter over a salad of mixed raw vegetables, a mid-afternoon smoothie with egg (including the yolk) and nuts, and dinner of duck with the skin and broccoli cooked in butter.

In basic terms, a ketogenic diet is high-fat, moderate-protein, carbohydrate-restricted consumption that primes your body to go into a “ketogenic state,” or “ketosis.” As a result, ketones are released in the body and used for fuel. Some call it “eating fat to burn fat.” An example of consumption breakdown could be 70 to 75 percent fat, 15 to 20 percent protein and only 5 to 10 percent carbs, but this can vary depending on the person. Some studies have found that ketogenic diets can induce numerous favorable metabolic and physiological changes, including weight loss, improved body composition, reduced inflammation and increased insulin sensitivity.

Maffetone says that through trial and error, and based on signs and symptoms, he will lower an athlete’s carbs and increase fat intake while monitoring results. Initially, there is an adjustment period where an athlete may experience fatigue, often called the keto-adaptation period. In the long term, he has seen many benefits from athletes of all levels.

“I prefer not to use the term ‘diet’ when referring to this or any way of eating—as diets can be and often are unhealthy,” says Maffetone. He adds there are various studies and real-life examples that support a ketogenic fueling plan. “I’ve even seen some women’s menstrual cycles get better and have helped doctors to use this way of eating with patients to eliminate seizures.”

Maffetone says assessments are regularly made. “How far we go is based on [the athlete] finding the level that makes them feel the best,” he explains. “You have to ask yourself: How does this make you feel? You as an individual have to get a sense of your instincts and intuition as to what it feels like to be at the right level, with too many or too few carbs.”

As part of his research, Maffetone developed the “Two-Week Test” so individuals can cut back on different carbs slowly to observe any signs and symptoms (like poor sleep or hunger). After two weeks, most have a good sense of what foods make them feel best. Then he suggests slowly adding natural carbs back and self-monitoring to understand the body’s limit.

Maffetone argues, “Your metabolism changes over the course of the year because of the seasons. It also changes as we age. This is another reason why carbs are important to figure out—you need to take charge of your own body and experiment, and you need a professional that is willing to help. A lot of people jump into ketosis and feel terrible and get turned off, but part of that is because the body doesn’t like change.” He does admit that this can result in abnormal blood pressure for some people, but adds, “If being in ketosis makes you feel the best, that’s what you should do.”

Fitzgerald says that we all have much more in common: “Our bodies are unique, yes, but it is my belief that we have to start with the same generic guidelines. When an athlete switches from a normal diet to high-fat consumption, the adaption period can be tough,” he says. “You feel terrible and your training takes a nosedive, and a lot of athletes don’t come out of that. Sure it may work for some athletes, but the problem is we don’t know the long-term effects. It’s an extreme diet and in terms of performance, many of the world’s best athlete  don’t do this.”

There are much better ways to get results than chronic high-fat diets, according to Fitzgerald. For instance, you can do selective carb deprivation (the act of withholding carbs temporarily, resulting in glycogen depletion, which Fitzgerald himself has done for certain marathons). He explains, “You get more or less the same benefits of keto without the long-term effects and negative downfalls.”

Of course, there are athletes who have found success following neither Fitzgerald’s nor Maffetone’s eating plans. Tamara Paton from Niagara, Ontario, has completed 10 marathons across North America and is currently training for the Chicago Marathon this fall. Paton prefers plant-based nutrition, which she says allows her to recover quickly from workouts. “I can run 10 miles in the morning and feel ready to run again or lift weights in the afternoon.”

RELATED: Get Creative With Your Carbs

The majority of her calories come from carbs as close to their natural state as possible. “I hear about runners eating high fat, but I’m not clear on how they can do so without increasing their cardiac risk,” she says. “Eating plant-based, I find it easy to maintain a healthy weight and build muscle to support a strong running stride—and my doctor has declared me heart-attack proof with blood work that keeps getting better over time.”

Paton became curious about plant-based nutrition when family members were diagnosed with cancer, diabetes and Parkinson’s disease in rapid succession. Her nutrition focuses on whole foods with an emphasis on greens, whole grains, beans, berries and nuts.

So as you can see, it’s important to keep in mind why you eat the way you eat. Remember, when it comes to various fueling plans, make sure you do what’s best for you and your health. There are options, so choose wisely.

According to Study.com, a deficiency of carbohydrates leaves the body with very little fuel to run on, leading to decreased energy levels, fatigue and lack of focus and function of the brain’s full capacity.

Both sides of the debate agree that protein is crucial for runners. Try this jerky recipe, created by nutritionist and fitness specialist Siera Capesius of SieraFit, for a healthy fix.

Directions:
Cut turkey meat into 1/8-inch strips (slice with the grain, so it doesn’t fall apart). Stir remaining ingredients together in a large bowl. Add turkey strips to marinade, and cover with plastic wrap. Refrigerate for at least 8 hours or overnight. Place turkey on a stack of paper towels to dry before cooking. Preheat oven to 170 degrees. Spray a wire rack with cooking spray. Place turkey on rack over a baking sheet. Bake for 2 hours. Turn the pieces over, and bake for an additional 2 hours. Let jerky cool and enjoy!

Jerky can last a week at room temperature or 2–3 months if it is wrapped or vacuum sealed and kept in the refrigerator.

The Staples Every Runner Needs in Their Pantry