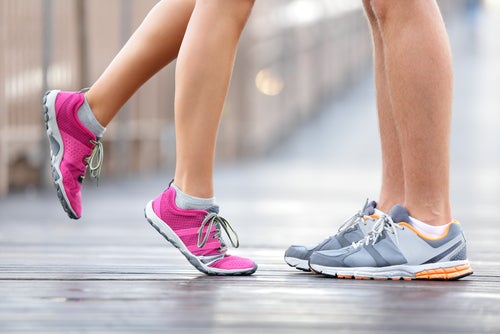 A new study out of the UK suggests good distance runners could be good breeding partners.

A new study reports that males with higher “reproductive potential” are better distance runners. According to the study from the University of Cambridge Division of Biological Anthropology, it may have been used by females as a reliable signal of high male genetic quality during our hunter-gatherer past, under the notion that good runners are more likely to have other traits of good hunters and providers, such as intelligence and generosity.

Researchers report the finding that males with greater “reproductive potential” from an evolutionary standpoint are better distance runners suggests females may have selected for such athletic endurance when mating in the past, perhaps because persistence hunting–exhausting prey by tirelessly tracking it–was a vital way to get food. The newly released study on marathon runners using finger length as a marker for hormone exposure shows that people who experienced higher testosterone in the womb are also better at distance running—a correlation particularly strong in men, although also present in women.

Related: How Your Running Affects Your Relationship

“The observation that endurance running ability is connected to reproductive potential in men suggests that women in our hunter-gatherer past were able to observe running as a signal for a good breeding partner,” said Dr. Danny Longman, the study’s lead author. “It was thought that a better hunter would have got more meat, and had a healthier—and larger—family as a consequence of providing more meat for his family. But hunter-gatherers may have used egalitarian systems with equal meat distribution as we see in remaining tribes today. In which case more meat is not a factor, but the ability to get meat would signal underlying traits of athletic endurance, as well as intelligence—to track and outwit prey—and generosity—to contribute to tribal society. All traits you want passed on to your children.”

Age is Just a Number: Why Elite Women Over 35 are Crushing It

Eat Yourself Out of Overtraining