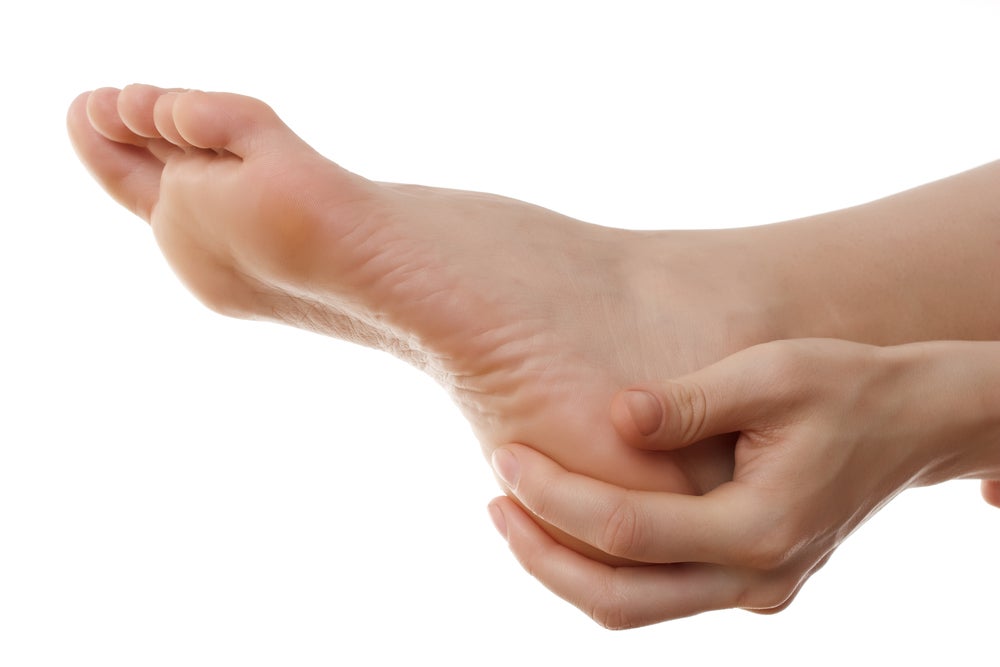 Published with permission of Competitor.com

Until I was struck down with plantar fasciitis last week, I had always thought it was an injury that hit only beginner and overweight runners. Oh, how wrong I was.

Plantar fasciitis, also known as Runner’s Heel, is one of the most common injuries among athletes, characterized by a sharp pain in the heel and arch of the foot. Approximately 10 percent of runners will have plantar fasciitis in their careers. They’ll join scores of other athletes and non-athletes with this painful and strange injury.

Because plantar fasciitis can strike a wide range of people — high-volume runners and overweight non-athletes — and little is known for certain about its exact cause, the term can often be used as a catch-all when self-diagnosing injuries.

“There are a variety of other soft tissue disorders that can mimic plantar fasciitis,” said Daniel Riddle, a professor of physical therapy and orthopedic surgery at Virginia Commonwealth University, who has studied plantar fasciitis extensively.

Instead of plantar fasciitis, what you may really have is heel pain or a pulled muscle in the arch. Plantar fasciitis specifically refers to irritation of the plantar fascia where it attaches to the heel bone and runs along the bottom of the foot.

The tell-tale signs that you have genuine, honest-to-goodness plantar fasciitis, said Riddle, are pain on the bottom inside of the heel that often comes with pinpoint tenderness and pain during your first few steps after arising in the morning, because the fascia have stiffened and shortened overnight, which eventually subsides as you move around.

The belief has long been that inflammation in the fascia causes the notable pain at the insertion point on the heel — hence the “itis” in the name of the injury. But recent studies have actually found very few signs of inflammation in injured tissue. It’s now believed that the problem really is one where the plantar fascia thickens and the collagen fibers degenerate or weaken. This may be caused by tears and stress in the soft tissue.

All this confusion could help explain why asking your friends for advice or searching online for plantar fasciitis treatments yields a disturbingly varied wealth of suggestions. Some people swear that they switched to barefoot running and got better; others testify to the magic curing powers of super cushioned shoes.

That discrepancy, said Caleb Masland, a coach and elite runner, can simply be because what is important isn’t how you change your shoes, but that you change them. If you don’t vary shoes or don’t strengthen the muscles in your foot, then “that can become a weak point,” said Masland. Variety is important to prevent the exact same repetitive stress from happening over and over.

In addition to reducing run volume or resting, the most commonly recommended treatments include:

— Arch support and wearing inserts in your shoes

— Taping the arch of the foot when walking or running

— Rolling and stretching the foot

— Rolling and stretching the calves

RELATED: The Truth About Plantar Fasciitis

The only problem is that while many of these are very popular, they don’t necessarily have scientific research to back them up or have been proven to be only minimally effective. And, most notably, plantar fasciitis tends to resolve itself eventually regardless of what you do, leading many people to run through it — possibly extending the injury — and ultimately swear by whatever treatment they tried last.

“The issue is that there are lots of treatments that might work but just haven’t been studied in much detail. Lack of evidence doesn’t always mean lack of effectiveness. Equally there are also a host of treatments that aren’t likely to make much difference but people try anyway,” said Tom Goom, a physical therapist at The Physio Rooms in the UK and creator of Running-physio.com.

As long as people reduce their training load, work on ankle and foot mobility, and strengthen the calf and foot muscles, then “I’m happy for them to use whatever treatments they find work for them,” said Goom.

Of course, one of the key treatments is figuring out what caused the problem in the first place; otherwise you might just end up right back on the injured reserve list. But when it comes to plantar fasciitis, it’s not always clear what causes the tissue degeneration, initial inflammation, or tearing.

“Anything that can cause repetitive stress or impact [can lead to plantar fasciitis],” said Masland. That includes sudden increases in running mileage or intensity, as well as sudden changes in foot strike or shoes, but it can also come from increases in standing or walking. There have been studies showing that foot structure (really high or really low arches) can contribute to plantar fasciitis, said Riddle, as well as shortening of the calf muscles and Achilles tendon. That’s why strengthening and stretching those areas is an important part of treatment and prevention, but it may not be a golden ticket to being pain free.

“There are a host of reasons,” said Goom.

While most runners try to self-treat and self-diagnose plantar fasciitis, if it’s chronic or fails to get better with multiple weeks of test, then it’s important to see a doctor to make sure you diagnosed and treated the injury correctly.

“Sometimes you’ll get lucky and it’ll help, but you’re more likely to see success if you seek help,” said Riddle.

Plantar fasciitis is incredibly painful — as I’ve learned all too well — but it’s not a severe injury. Most people will find that it heals itself in time and can be avoided through careful training, though that’s not particularly helpful when in the throes of an injury. In the meantime, I’m certainly not the only runner willing to try everything.

Kelly Dunleavy O’Mara is a journalist/reporter and former professional triathlete. She lives in the San Francisco Bay Area and writes for a number of magazines, newspapers, and websites. You can read more about her at www.sunnyrunning.com.

Got Heel Pain? Here’s How To Fix It.

The Pain In Your Foot Could Be Plantar Fibroma