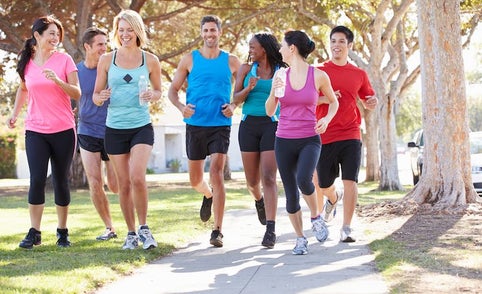 Throughout her first 59 years of life, Martin says, “I wasn’t a workout buff.” Maybe some Zumba here, a few step classes there. “I did it every now and then just to work up a sweat.” But when a friend called to ask if she wanted to do the half-marathon option in the Indianapolis Monumental Marathon in 2017, she found herself saying yes, even though she’d only tried running once before. There were two compelling reasons for this: She wanted to join her friends in raising money for Team World Vision to dig clean water wells in Africa, and it was a celebration in her 60th birthday year “of being in good enough health to want and be able to run,” she says.

Fifteen years earlier, a medical team had called her family to the hospital where she lay after a ruptured brain aneurysm. She wasn’t expected to make it through the night. Three months and four brain surgeries later, “I left that hospital healthier than when I went in,” Martin says, adding that she went in as a smoker but came out with that habit behind her.

She didn’t take up running until training for the half started in April 2017. This time, it was love. “I loved the self-competition and pushing past the normal limitations I set on myself. The feeling of being healthy is just incredible. I feel free, I feel accomplished, I feel strong,” she says. Plus, she lost 30 pounds—eating healthfully to support her running became important, “and the weight just melted away.”

That half marathon “was the best hard thing I’ve ever done in my life, short of having my children,” she says. “It was gratifying, exciting, expanding and challenging.” And tear-inducing. Between the struggle to finish and the exhilaration, everyone needed tissues. “My husband said, ‘I’ve seen you fighting for your life. And I’ve seen you run a half marathon. Tell me that God isn’t good.’”

Athens, Greece, Nov. 13, 2016. Morgan and a friend had their sights set on running the original marathon. She started running in 2014. “When my son went away to boot camp for the Marines, I needed to stay mentally healthy,” she says. Morgan had racked up her share of 5Ks, 10Ks and half marathons. For her, “A marathon was the next step.”

Morgan got into the race, booked her travel and about six weeks into training for it, had a recurrence of the endometriosis she’d been diagnosed with in 2013. “It was really painful to run,” she says. Couple that with side effects from the medications, including weight gain and fatigue, and it wasn’t a perfect training scenario.

But run it she did. “I was nauseated the whole time, and I went through every emotion on the spectrum,” she says. “I kept that medal in my car forever.” About two months after the marathon, Morgan had another endometriosis surgery and started running again with Black Girls Run “to get back in the swing of things.” She was considering the Broad Street Run—a 10-mile run in the heart of Philadelphia—that May, except she had a hard time breathing. “One of my running sisters pointed out to me that I couldn’t even walk fast without breathing heavily. I thought I was just out of shape, but we realized that didn’t make sense, given that I’d done a marathon recently,” she says.

Another trip to the doctor revealed she had deep vein thrombosis—in her case, a blood clot in her left leg and one in each of her lungs (these can be fatal). “Running has done so much for me. First, it helped me with my mental health, and then it helped me with my physical health—if I hadn’t started training for Broad Street, I wouldn’t have known I had the clots. That saved my life.” She won an entry for the race this May, too (it’s a lottery), and with all the health challenges, “training is like starting over.” But she’s planning to ease back into things and keep her expectations in the right place. “You do what you have to do.”

After her first marathon in 2014, Benefield’s thought was “never again.” Until Christmas day of that year, when she felt a breast lump in the shower. After a double mastectomy with reconstruction, plus chemo and radiation, she reconsidered and decided her comeback race would be the 26.2 with DONNA, The National Marathon to Finish Breast Cancer, in 2017. She’d heard about it while training for her first marathon and had briefly considered doing it for her mom, who also has breast cancer. Now, apparently, was the time. (“Although I thought, Okay, universe, if you really wanted me to run that marathon, you didn’t have to give me cancer, too!”)

During treatment, she walked a lot of 5Ks to get healthy and stay energized. “My oncologist said that physical activity decreases the risk of recurrence, so the easiest thing to do was put on a pair of shoes and go outside,” she says. “My kids are 5 and 7, so they never stop moving. I didn’t want to be what keeps us from going out and doing things.” When cleared to run, she also attended Weight Watchers “because I thought the marathon would be tough at the weight I was then.” She’s lost 60 pounds since August 2016.

“Running makes me feel so good, so strong,” Benefield says. A morning run “makes me feel like I can take on the day—a good, good feeling that waterfalls into the rest of my life,” she says. It’s also one that can’t be overrated. “I want to live each day because I know that one day you can be in the shower, and your life changes.”

3 Things I Do Every Day To Remain A Healthy Runner

Running Through The Decades

These Stats Show How Healthy Running Is For You